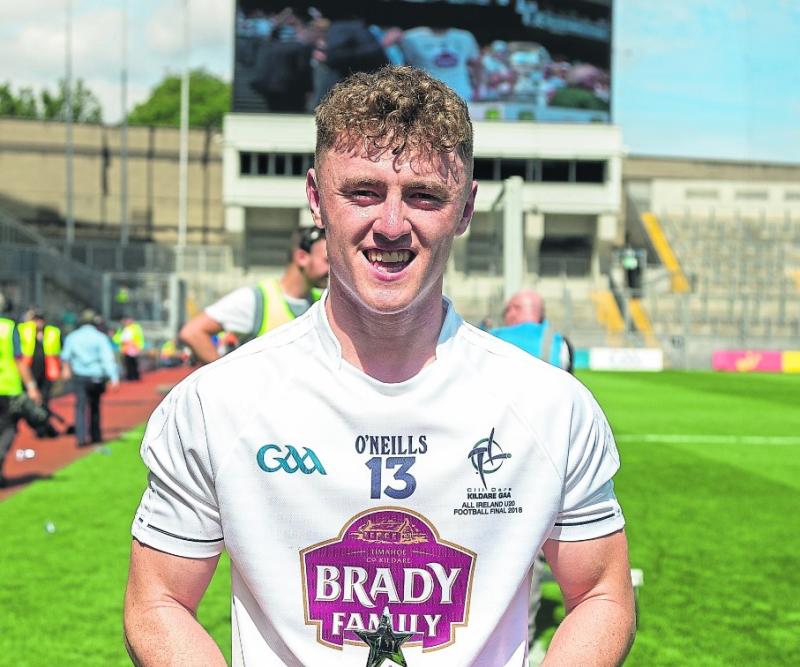 It took us a long time to get there but when we did I think it is fair to say we certainly enjoyed it.
The more one looks back on it the more the achievement of winning the All Ireland U20 decider seems to grow.
Since that weekend a few things have surfaced that probably deserve a mention.
The first is that the decision to keep the U20 players to the U20 team certainly paid off. Four of the lads were official members of the senior squad but were released all along the line for U20 action rather than being promoted to playing members of the seniors.
It is a decision that the senior management should be congratulated on, unlike Eamonn Fitzmaurice who drafted in a number of U20s into the starting XV in The Kingdom.
On Bank Monday though as the celebrations were in full swing we met all the boys in McDonnell's (Newbridge) where the craic was mighty and the rain did little to dampen proceedings in the open air Back Bar section of the premises.
I bumped into the very proud mam of Jimmy Hyland (not forgetting his sisters) or indeed dad Terry, at some stage during the evening.
Jimmy's mam, Betty, has to take probably more credit than most out there for the rising star actually even making it onto the pitch at all on the big day.
You see 20 years ago Jimmy was due to make his appearance into the world on Christmas Day but such was his comfort at the time he decided to hold off for some eight or nine days before finally arriving in early January.
It turned out to be perfect timing by Jimmy as if he had arrived when he was expected to, on Christmas Day, or even a day or two later, he would have been ineligible to play in this year's U20 All Ireland final.
So you see it's not today or yesterday that Jimmy, with a little help from his mam, Betty, began getting his timing spot on; that perfect timing has continued since and long may it continue in the years ahead!

Returning back to Kerry, Killarney and the Super 8s clash with the Kingdom boys, I have to say the remarks that the late Páidí Ó Sé made back in 2003 when describing (some) Kerry supporters as “the roughest type of f***ing animals you could ever deal with” came to mind as we made our journey home.
What has been disclosed since by Eamonn Fitzmaurice, now the former Kerry manager, regarding the abuse he, and others, have received over the years, certainly gives (some) credence to what the late Páidí uttered, albeit at the side of a swimming pool while on a Kerry team holiday in South Africa.
However, I have to say that sitting in the press box in Fitzgerald Stadium when Kildare were running Kerry ragged in that opening half, the remarks of some of the local (Kerry) press reporters could only be described as arrogant in the extreme.
You know it's not only the Kerry supporters believe they have a divine right to win every game they play, especially games as the season unfolds and particularly as the All Ireland series progress to the business end of the All Ireland series.
And while they (Kerry) eventually got over Kildare (and no we won't go back down the road of referee and linesman again) I have to say, despite leaving Killarney with a heavy heart after Kildare's loss, the news that the boys from The Kingdom had been knocked out following Monaghan's victory in Galway gave me more than a small bit of comfort.
And that is coming from someone who always looked upon Kerry as my 'second choice' county.
But after listening to the scurrilous and gutter remarks made by some of the Kerry scribblers, about a man that won 3 All Irelands as a player, one as a manger, one AFL and numerous Munster titles, not anymore!