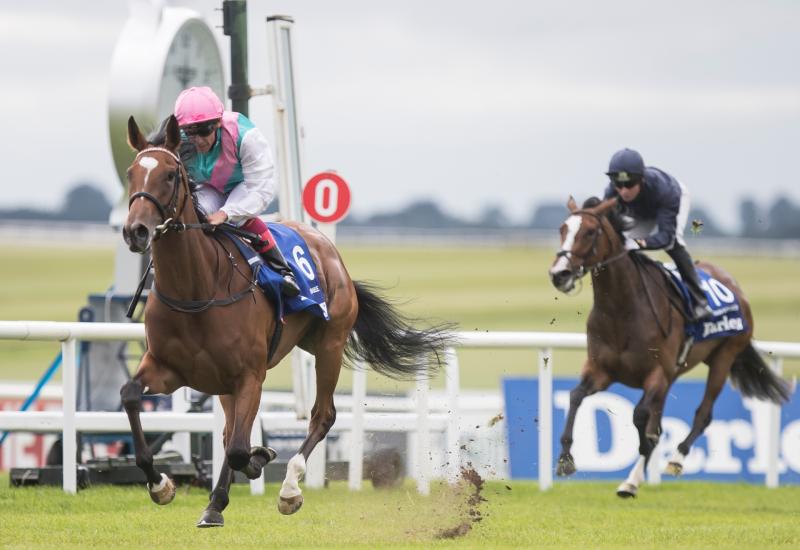 Enable and Frankie Dettori winning the Darley Irish Oaks at the Curragh in 2017. PICTURE: PATRICK MCANN

A return to the Curragh, where she won the Darley Irish Oaks last year, could be on the cards for the mighty Enable which heads the entries for the Group 2 Moyglare “Jewels” Blandford Stakes on the second day of Longines Irish Champions Weekend next month.

Entries for the main supporting races to the six Group 1 events at Leopardstown on Saturday, September 15 and the Curragh on Sunday, September 16 are particularly strong and 13 overseas hopefuls feature in the €200,000 Moyglare “Jewels” Blandford Stakes with John Gosden putting three in the race, headed by last season’s dual Oaks and Qatar Prix de l'Arc de Triomphe winner Enable which hasn’t run since her Chantilly success in October. Gosden has also entered the unbeaten three-year-old Lah Ti Dar and Coronet, a two-time Group 2 winner.

The Saeed Bin Suroor-trained Winter Lightning, successful in the UAE 1,000 Guineas at Meydan in February is another cross-channel entry to note while Jean-Claude Rouget’s listed winner Mascha could carry French hopes in the race. Group 1 winners Rhododendron and Hydrangea have been entered by Aidan O'Brien and Royal Ascot winner Magic Wand also features for the Ballydoyle maestro.

Derek McGrath, Chief Executive of the Curragh Racecourse, said: “The presence of Enable amongst the entries for the Moyglare “Jewels” Blandford Stakes is very exciting and we would be delighted to see her return to the Curragh having won the Darley Irish Oaks last year. The overall entries are very strong in particular from overseas and the race has the potential to be one of the highlights of a magnificent weekend.”

There is a strong British contingent among an entry of 62 horses for the Group 2 KPMG Champions Juvenile Stakes at Leopardstown on Saturday, September 15 headed by the Mark Johnston-trained Dark Vision which was an impressive winner of the Group 2 Qatar Vintage Stakes at Goodwood last week. Unbeaten in three starts, he could be joined in the €150,000 event by the Gosden-trained Beatboxer which made a winning debut at Sandown late last month and Mick Channon’s Certain Lad which was third to Van Beethoven in the Group 2 GAIN Railway Stakes at the Curragh. Aidan O'Brien’s Goodwood winner Land Force, successful in the Group 2 Qatar Richmond Stakes, and Anthony Van Dyck, so impressive in the Group 3 Japan Racing Association Tyros Stakes at Leopardstown, lead the home brigade which also boasts Dermot Weld’s course and distance winner Masaff.

An entry of 46 has been made for the Group 2 Clipper Logistics Boomerang Stakes and Group 1 winners Rhododendron and Lancaster Bomber feature in a strong Ballydoyle entry that also includes one-time leading Epsom Derby hope Amedeo Modigliani. Ken Condon’s Tattersalls Irish 2,000 Guineas winner Romanised is also in the race which has attracted last year’s winner Suedois which went on to victory in the Grade 1 Shadwell Turf Mile Stakes at Keeneland in October for trainer David O’Meara.

There are 40 horses in the Group 3 Paddy’s Rewards Club Stakes with Willie Mullins’ Royal Ascot winner Lagostovegas and Stratum, third at Royal Ascot and a big handicap winner subsequently at Newbury among the entries. Max Dynamite is also entered by the champion jumps’ trainer but the highest-rated contender is certainly Aidan O'Brien’s dual Group 2 winner Idaho while triple Group 3 scorer Eziyra, successful in the KPMG Enterprise Stakes on the card last year, is in for Dermot Weld.

Pat Keogh, Chief Executive of Leopardstown Racecourse, said: “We are delighted with both the quality and number of entries in all three races at Leopardstown. It is great to see that the KPMG Champions Juvenile Stakes which has been upgraded from Group 3 to Group 2 has been very well supported, with a good number of horses entered from England. Longines Irish Champions Weekend is all about quality racing and it is looking very strong again this year.”