Confey man takes up coaching and managing after serious injuries 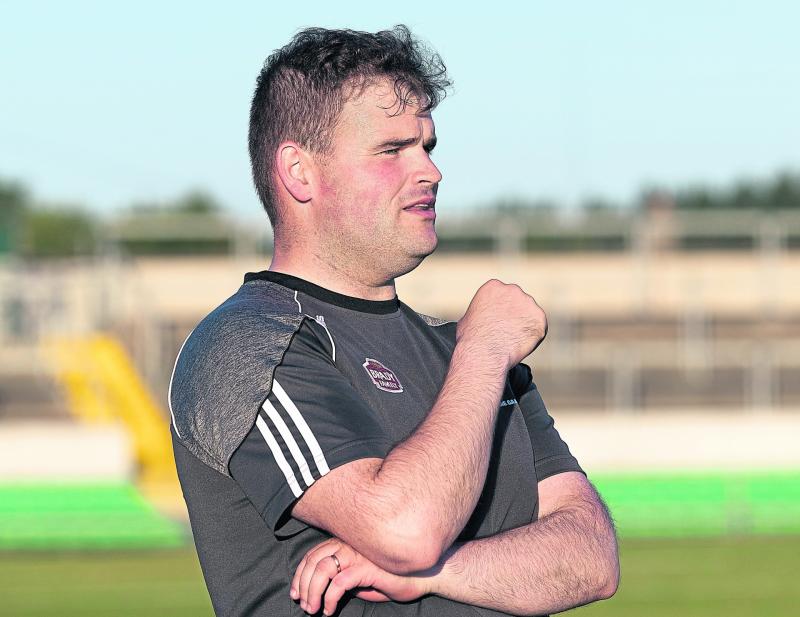 There are very few, in any, football managers who have just crossed the threshold of three decades and have guided a team to an All Ireland football final.
This man in question has managed the Kildare U20 footballers to a Leinster Championship title, defeating Dublin in the final; going on to defeat a Jack O'Connor managed Kerry side in the All Ireland semi final, a Kerry squad that has won four Munster finals in the past four years; going on to win four All Ireland finals in a row.
Meet Davy Burke.
A Confey man.
A Kildare man.
A man who led Confey to Senior Football League success in 2016, while also leading his native club to the semi final of the senior football championship.
Davy Burke was an avid football man from a young age; his family are steeped in the game with both parents heavily involved with the Confey Club in Leixlip.
“I tore my cruciate when I was just 15” he told the Leinster Leader this week, “but on top of that I also did my knee cap and to be truthful I never really recovered; that was in the time before the likes of Ray Moran, and others, were around to get players, unfortunate to pick up serious injuries, back on the road.”
Injuries to a player at such a young age may have turned off many a lad but not Davy Burke. Coming to terms with the fact that his football career was over he did not go and hide in the corner but instantly decided to go down the coaching side of things.
His dad is a former manager of Kildare Ladies, among many other sides, but he (Davy) got plenty of encouragement along the way.
“I did various coaching courses; got involved with teams at underage level with Confey; Féile teams and such like; I shadowed many managers and coaches learning as I went along.”
Davy was assistant manager to the Dublin Senior Ladies that reached two All Ireland finals coming up against Cork, “probably the greatest Ladies team we have ever seen” ;I was involved with Trinity College; Confey U21s; Kildare minor Ladies before I took charge of Confey senior footballers, where we won the club's first (and only) SFL title and reached the SFC semi final.
“I was with Confey for two years before deciding it was time to move on; probably felt that that team had gone as far as I could bring them at the time but those were great times.
“I had family members and really close friends involved in the team and they were a great bunch of lads and I am happy to say that I am still on the best of terms with each and everyone that I managed in those two years.”

You must be delighted you agreed to take over the U20s, Leinster champions and now an All Ireland final to look forward to, did you feel from an early stage you had the makings of a good team?
“Early in the year while we were training very hard, as a team things were not where I wanted to be; we played challenge games after challenge games and to be honest were on the end of a few disappointing defeats.”
You say it was around early May when suddenly things began to change and change for the better.
“Once the ground turned hard I could instantly see the change, the improvement; everyone just seemed to switch on and connect all at once but I have to say I knew from the start that we had a serious bunch of talented players it was just a matter of clicking into gear and from early May that happened; we had kinda been stuttering and starting; we couldn't get a real good run at it; as I said it was a new competition and it took a while to get everyone working off the same platform but one thing I did know was that we had talent in abundance.”
So once the real action started were you confident you would have a long journey ahead of you?
“No, we didn't know how far we could go but in our first championship against Laois in Newbridge, we showed great character that day; we came from behind to win; we were still trying out lads; trying out ideas but definitely I saw enough that evening against Laois to start believing we had something special here.”
Having made it out of the group stages and reaching the Leinster final and a date with Dublin in Tullamore, how did you feel going into that game?
“We had seen Dublin in Navan against Meath and they were very, very impressive that day but I then sat down with my selectors Evan McDermott and Deckie O'Toole and began plotting and planning; we had big decisions to make for that game and I have always said that this is a more than just a team game, it is a panel game and each and every lad on the panel has a role to play.
“Remember we picked Jack Bambrick, a lad who plays with Ardclough, to do a job for us against Dublin; he was given a man marking role on their top man and he did a magnificent job; but that is the strength of the panel; that is the depth that we have in the panel.
“I see it every night in training; lads who may not make the match day squad are usually the first lads on the training pitch; working their socks off get in the next day; they are all capable footballers; all capable of coming in and doing a job when required just like Jack Bambrick did against Dublin.
“That win over Dublin was brilliant for the team but it was brilliant for the county; victories like that over Dublin should be, and must happen more often; the talent is in the county have no doubt.”
And so on to the All Ireland semi final, The Gaelic Grounds, Limerick; Kerry; Jack O'Connor and a team that had just won four All Ireland minor titles in a row; Kildare went into that game as complete underdogs?
“I'll be honest with you, on our way down to Limerick I was talking to Evan and Deckie and I have to say, and I hope this does not sound arrogant, but I never felt under any pressure that day; I really felt we could win that game.
“These bunch of lads give us everything; do whatever we ask of them and remember a fair few of them had lost to Kerry by 22 points in the All Ireland minor semi final just two years ago; a defeat that was described by some of them as an embarrassment; we used that as a motivation factor and thankfully it worked out.”
While there are a few individual highly talented players nevertheless this is a real panel effort?
“Absolutely, this is a collective thing; we have shown throughout the campaign that when one lad is maybe off a bit, the next lad will step up; that is the way it has been from the start and that is the way we operate and hopefully it will all come to fruition on Sunday.”
You said after the Kerry win you knew nothing about your final opponents Mayo, what have you learned since.
“At the time we didn't as we couldn't be seen looking at Mayo and still having to beat Dublin and Kerry before we met them but we have done lots of analysis and video work on Mayo who are a big physical team; they have some top class players but we are fit, focused and injury free except for Shane O'Sullivan, who I am hopeful will be ready by match time.”
Are you confident?
“I know what we have; what we have come through to be here; if we play to our full potential, nothing less, we will be close.”