Kildare edge out Wicklow in the Leinster MFC semi-final replay

Lilies will take on Meath in the final 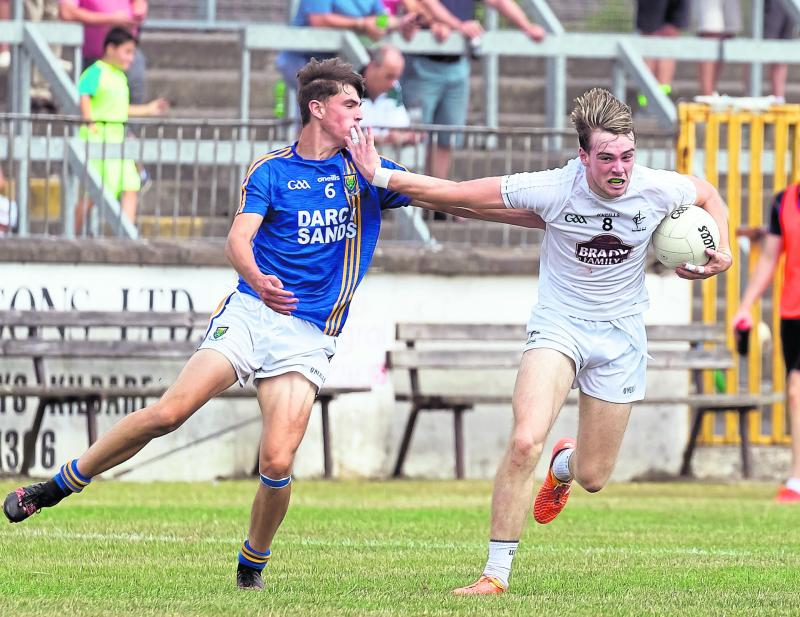 Kildare's Liam Broderick pushes past the challenge of Oisin Cullen

Kildare are through to the Leinster Minor Football Championship final after a thrilling replay against Wicklow in Aughrim tonight, July 13, final score Kildare 2-12, Wicklow 1-13.

Wicklow dominated the first-half, the scoreline deceiving at the half-time whistle as they led by a single point, 1-07 to 1-06. Sam Kearney and Tom Moran outstanding in defence for Wicklow.

Kildare opened the scoring in the first minute with a point but Wicklow replied with a brilliant Eoin Darcy goal, a big ball given in by John Keogh after two minutes.

Kildare had a chance of a goal just before the 12th minute when Alex Beirne made a run through but the ball hit off the left post.

A excellent ball into Matthew Ging in the 14th minute seen a left foot shot go over the post, Jack Smith replied with an outstanding point for Kildare in the 20th minute.

Kildare goalkeeper John Ball made a pivotal save in the 25th minute.

Eoin Darcy struck a 45 on the 26th minute, and then a Sam Morrissey goal flicked in on 27 minutes giving Kildare the boost they needed.

Kildare sub Muiris Curtin made a huge impact when he came on in the second half, scoring 1-02 in the first 7 minutes of play.

Clane's John Ball made a savage save after a poor kick-out on the 47th minute, when Wicklow sub Shaun Cranley shot at the left hand corner.

John Lynch and Sean Hill stepped up in defence for Kildare, and it was the Lilies who seemed to be on top.

Wicklow looked dangerous in stoppage time as they fought for a goal to level the game, a big ball in from Kevin Quinn on the 33rd minute dropped just in front of goal, and Eoin Daryc striking it over the bar to reduce the deficit to two points, just before the final whistle blew.