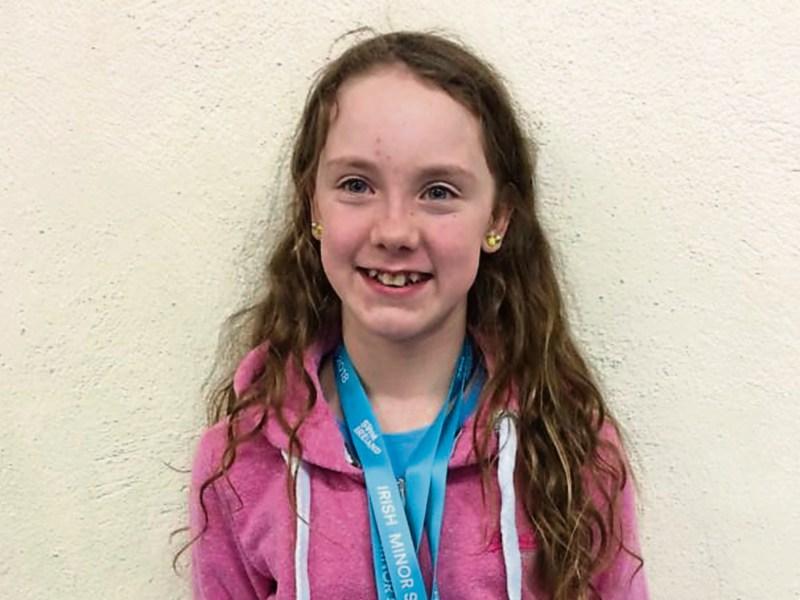 Aoife Doran, from Cadamstown, Co. Kildare, is the National Schools breaststroke Champion (All Ireland) and took silver in the 100 metre individual medley last week, as usual she was representing her school, Cadamstown NS, near Johnstownbridge

Aoife Doran is just 11 and swims with Aer Lingus Swim Team 5 days a week; has Leinster training on Saturdays; she is on two Leinster squads due to her unusually fast times.

Since last May Aoife has won Gold in the Community Games in Breaststroke for Kildare and qualified for 5 events in the division 1 championship (she was underage ) where she won bronze in Breaststroke.

She competed in Leinster Schools last October, winning both of her events which qualified her to compete in last Sunday’s Irish Schools (32 counties) competing in the individual medley ( IM - combination of frontcrawl, backcrawl, breaststroke and butterfly ) and the breaststroke.

Aoife achieved PB'S in both events on Sunday;  Silver in the IM and Gold in the breaststroke.

Recently Aer lingus Swim Club (ALSC) released their current  swim records dating back to 2003 (175 in total) and Aoife has set an incredible 14 of these by age 10-11.

She has already qualified  for four events in the forthcoming National Division 1 Championships, again she will be underage.