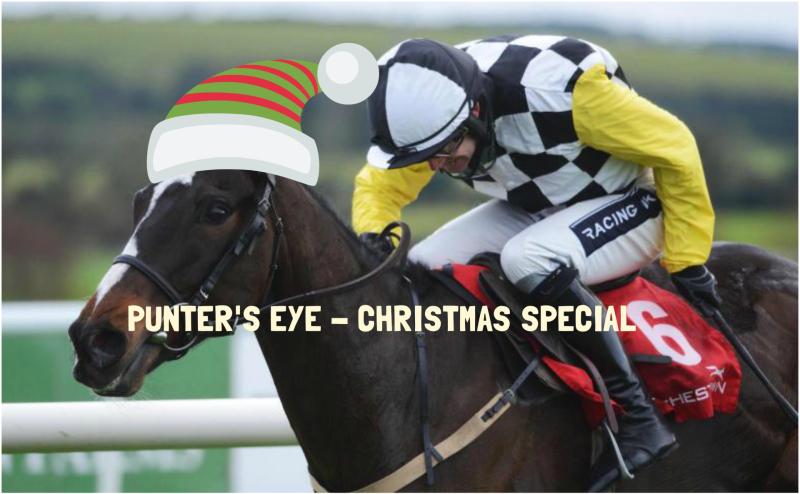 DEATH DUTY has been flawless since making the switch to fences this. The Gordon Elliott-trained six-year-old is three from three over the larger obstacles, appearing to be improving considerably with each passing run. He began his chasing career in October by beating CAP D'AUBOIS by the best part of a length, a more than pleasing introduction, especially when you consider the rest of the field was some 23 lengths behind the front pair. If that was good, his second outing was sublime. He was seamless in running and wasn't fully extended in beating TOUT EST PERMIS by 11 lengths and the 150-rated WOODLAND OPERA by 15. He did, however, show a few quirks by jumping left at Fairyhouse on December 3, his most recent run, but still easily accounted for the challenge of RATHVINDEN by more than three lengths. RATHVINDEN could re-oppose here but his stablemate FOOTPAD, another newcomer to the chase scene, is the main danger. She was excellent in winning by 11 lengths at Navan in November on chasing debut and given her superb hurdling history, she could be a force going forward.

I think there could be a big run in ORDINARY WORLD here, despite not possessing prolific winning form. It is a bit of a longshot considering the names of MIN and UN DE SCEAUX on the entries list for this race, but an each-way punt is far from outlandish. His stand-out run last season was a respectable third behind the mighty ALTIOR in the Arkle at Cheltenham where he came home 15 lengths in arrears. That's solid enough form considering ALTIOR is one of the best around. Further to that, ORDINARY WORLD ran well to be second to MIN at Leopardstown this time last year and has the ability to do so again. He warmed up for this race with a decent runner-up finish behind BALL D'ARC at Naas in November, and will be winding up nicely for 2018 come December 28 at Leopardstown. His price may well be a late Christmas present too for each-way punters.

PLEASANT COMPANY is another of interest on the card at Leopardstown on December 27. This horse is undoubtedly being geared up for another tilt at the Aintree Grand National in 2018. He hasn't be sighted since that day Ruby Walsh steered him to ninth place behind ONE FOR ARTHUR at the Liverpool track in April. His jumping was exemplary for much of that mammoth trip, although it was a bad blunder four from home that cost him a run for ultimate glory on that occasion. However, Grand National fences are a law onto themselves, and for the most part, his jumping is very good over standard National Hunt obstacles. PLEASANT COMPANY has actually never fallen on the racetrack and showed he is up to winning a race like this by landing the Bobbyjo Chase at Fairyhouse last February. He can also go well fresh, proven by his win after a seven-month lay-off on seasonal debut in December 2015. At a good each-way price, this horse can go very close.

On December 28, there's only one show in town as SIZING JOHN tackles the Christmas Chase. Jessica Harrington's supremo is the premier staying chaser in the game at the moment, and it's a treat for Irish fans that he has swerved the King George at Kempton in order to run here. Although he is facing a stern test in the shape of YORKHILL, he can still come away an easy winner at 7/4. Willie Mullins' YORKHILL has won three of his four chase starts, including last season's JLT at the Cheltenham Festival, but he has yet to face anything of the sheer class of SIZING JOHN. Harrington's star swept all before him last term, culminating in his triumph in the Cheltenham Gold Cup. He's now won five on the bounce, a run that includes two victories over decent yardstick, DJAKADAM, including a seven-length success earlier this month at Punchestown. His only defeat since making the switch to Jessica Harrington's yard in May 2016 came against the incredible DOUVAN. SIZING JOHN is the name on the lips of astute racing people for good reason, and he will take some stopping once more.

Meanwhile, across the water at Kempton, the talk will be about a horse that isn't there - Sizing John - and amid such chatter, BRISTOL DE MAI could be the animal to take advantage. He was a solid chaser last year without ever setting the world alight, but he has been a resurgent force this term. Having finished 19 lengths behind Sizing John in the Gold Cup, he was even more disappointing at Aintree, coming home 25 lengths behind TEA FOR TWO. Following a break, he was brilliant at Wetherby, beating BLAKLION in a head bobber. The Betfair Chase appeared to be tougher with CUE CARD, OUTLANDER and TEA FOR TWO for company again, but to be frank, he made a mockery of the field, extending away to beat Colin Tizzard's fading star by 57 lengths. It was extraordinary, and the manner of that win suggests there is plenty more to come. He can outpoint MIGHT BITE in this intriguing renewal of the King George, a field that includes the likes of THISTLECRACK and FOX NORTON.