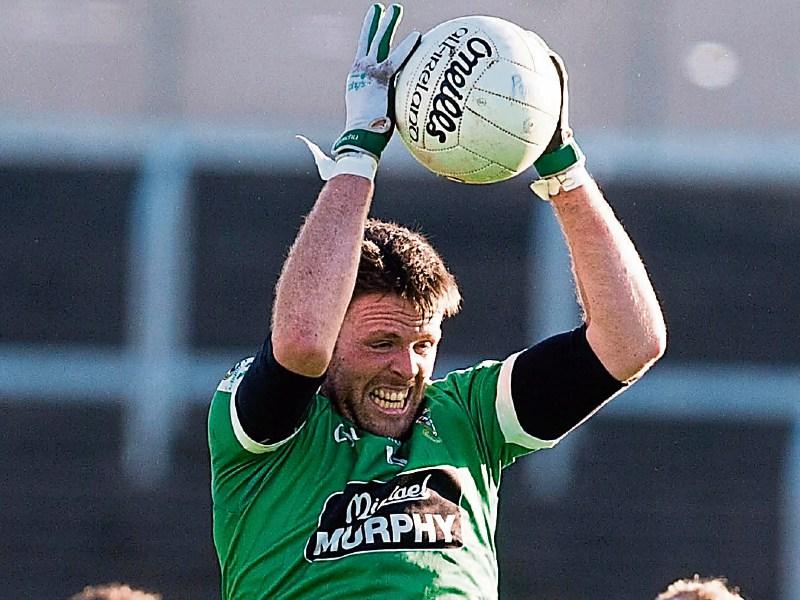 Cian O'Connor wins this ball for Moorefield ahead of Ciaran McEvoy, Portlaoise in the Leinster Club SFC at O'Moore Park. Photo: Alf Harvey.

There was 63 minutes on the clock, the sides were level, Portlaoise were on the attack, the ball falls to Portlaoise captain Conor Boyle, he steadies himself and swings the leg; in comes Moorefield captain James Murray and throws every inch of his body on to his boot.

The ball is blocked, eventually the Moorefield no. 6 gets up; jersey torn to shreds, stud marks across his chest, gets a new jersey and gets on with it.

Moorefield attack down the left, the ball finds its way to Niall Hurley Lynch, who had hit a wide just minutes earlier, this time he has the accuracy, has he the length, the ball looks to be dying but not before it creeps over the bar.

The Moores in front by one. The visiting fans are on their feet, we are into five minutes and Portlaoise get a free down the right hand corner, close to the sideline.

Up steps Paul Cahillane, he steadies, takes aim, shoots but his shot goes right and wide.

Kick out arrives, and finally referee David Coldrick calls a halt, Moorefield have finally beaten Portlaoise, are back into the semi final of the Leinster Club where they will meet surprise winners Rathnew of Wicklow who shocked St Vincent's of Dublin.

Incredible scenes in O'Moore Park on a bitterly cold but dry day as Eanna O'Connor, who had an absolute blinder, is handed the TV4 Man of the Match award.

The dream lives on.

Incredible performance from Moorefield who showed once again just what they are made of.

Manager Ross Glavin is calm as he gathers his thoughts.

“Resilience, inspiration from everyone within that group; great team spirit, a phenomenal performance” is his measured appraisal of the game.

Were you worried at half time down two points?

“No, the wind was not a big factor it comes back to the mental attitude in the group; they have shown it time and time again what they are made of going back to the drawn game in the Kildare championship when we were a couple of points down, not playing well, four or five debutantes on the pitch but they still showed that resilience, that togetherness we got a draw that day and that is where our season kicked off.”

From the throw-in the two no. 8s were in a tangle and referee Coldrick had a word with Conor Boyle and Roli Sweeney as Portlaoise looked dangerous from their very first attack the ball finding its way to David Holland inside the Moores full back line but he turned quickly and blasted over.

Eanna O'Connor leveled soon after before Brian McCormack edged his side back in front.

Portlaoise keeper, Graham Brody who lived up to his reputation by continually leaving his goal line, popped a 45 to push his side two clear and we are still in only the fifth minute.

Eanna O'Connor pointed a free and added a second to level  it up and The Moores took the lead in a great move involving Niall Hurley Lynch, James Murray and ended with Aaron Masterson firing over a beauty.

Scott Lawless had them level again but Eanna O'Connor, who was on fire throughout, sold his man a great dummy before splitting the posts.

Conor Boyle had them level on 14 minutes but again Eanna hit back, after being set up by Roli Sweeney.

Paul Cahilane left nothing between them for the fourth time but Eddie Heavey set up Eanna O'Connor who popped it over.

Back came Portlaoise with a Brian Mulligan leveler followed by a Scott Lawless and another Briody 45 to leave the home side leading at the break 0-9 to 0-7.

Moorefield opened brightly on the resumption and fired everything at Portlaoise. Niall Hurley Lynch had a squeak of a goal chance but delayed that half a second and his effort was blocked. Five minutes in and after a very patient build up Cian O'Connor reduced the lead to one.

The same Cian O'Connor had a mighty second half, breaking up attack after attack.

Portlaoise soaked up everything Moorefield threw at them, pinned into their own half for most of the opening third quarter and then in a rare enough attack Paul Cahilane put two in it mid-way through and when Scott Lawless converted a free it was starting to look dodgy for The Moores.

Craig Rogers picked up a second yellow, and an early shower, and then with five minutes remaining Moorefield attacked; NHL fed the ball to Eanna O'Connor who seemed to take an age but finally made room before firing to the net to leave the scores level at 1-8 to 0-11.

The rest as they say is history.

A real term performance from The Moores who simply refused to roll over and lie down.

Eanna O'Connor was superb and showed, not for the first time this term exactly what he is capable of. But he was not alone as to a man Moorefield worked their socks all over the field and finally got their reward with a win over Portlaoise.