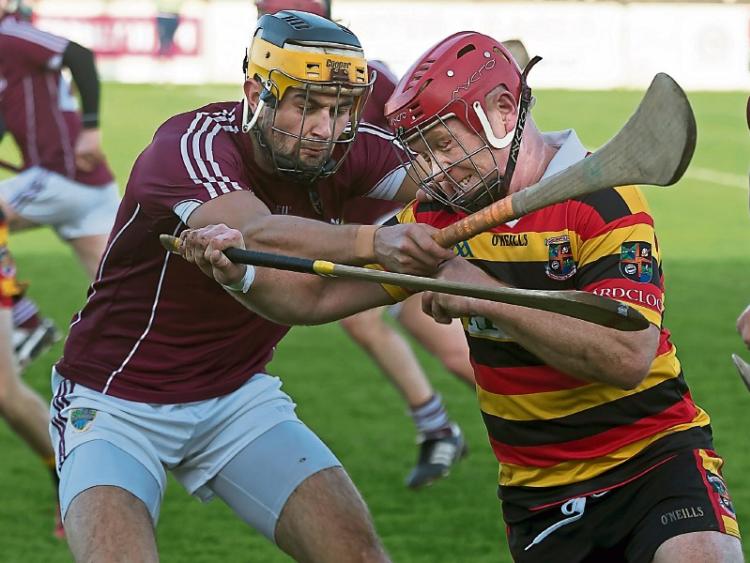 Arclough Colm Buggy tries to get past Geoff Brennan of Ballyreggett during the Leinster Club Intermediate Hurling tie in Newbridge on Saturday. Picture: Sean Brilly

ST Patrick’s Ballyragget put recent controversies behind them to book their place in the AIB Leinster Club IHC semi-final finals at the expense of Ardclough.

While much of recent talk around them centred on their celebrations of their county title success a couple of weeks beforehand, the Kilkenny outfit let their hurling do the talking in St Conleth’s Park last Saturday afternoon (November 4), writing more appropriate headlines this time with this comfortable win over Kildare’s finest.

Ballyragget led by one point at half-time despite having trailed by six after just seven minutes, yet a devastating scoring burst in the second half saw them ease into a last four showdown against Meath outfit, Kiltale.

Kevin Kelly, a member of Brian Cody’s Kilkenny senior panel who made his first  championship start for the Cats in the 2016 All Ireland final defeat to Tipperary, was Ballyraggett’s star man, plundering eleven points, with all bar two of those coming from placed balls.

Lining out at centre-forward, Kelly pointed five first half frees as the visitors entered half-time 0-9 to 1-5 in front, that after a blistering start from Ardclough had raised questions as to whether Ballyragget were still suffering a hangover following their last competitive outing.

Colm Buggy (2) and Martin Fitzgerald both pointed without reply inside the opening six minutes, before the Fitzgerald brothers combined for Martin to hit the net moments later to increase Ardclough’s early advantage to 1-3 to no score.

Kelly opened Ballyraggett’s account in the eighth minute from a free, a feat replicated by Fitzgerald at the other end to restore the six point difference after ten minutes but it was evidently clear that Ardclough’s work-rate, physicality and intensity was far too superior to what Ballyraggett had brought to the table.

That being said, Ardclough – aided by a stiff breeze on a chilly day in Newbridge – struggled thereafter to maintain those levels as Ballyragget gradually grew into the contest. By the time the interval would come around, Ardclough only added one further score to their first half tally, that a 24th minute wonder point from team captain, Paudie Ryan.

During that same period, Ballyragget added eight points of their own, with Kelly registering four of those and corner-forward, Michael Brennan two as the turning of the tide gathered much momentum.

Into the second half and there was a sense of inevitability about the game, that despite Kelly seeing his penalty two minutes after the restart come back off the foot of the post. Still, five successive Ballyragget points by the 39th minute opened considerable daylight between the sides (0-14 to 1-5), with Ardclough looking a beaten team devoid of any Plan B.

Fitzgerald did point a free in the 43rd minute – Ardclough’s first score in 21 minutes – but it did little to stem the tide as Ballyragget picked them off at ease at the other end, outscoring Ardclough by 0-10 to 0-2 before the intervention of the long whistle, with Kelly and Michael Brennan both filling their pockets, while both wing-back, Bill Staunton and full-back, Geoff Morrissey got forward to land fine points from distance.