The side just lose out in Extra Time 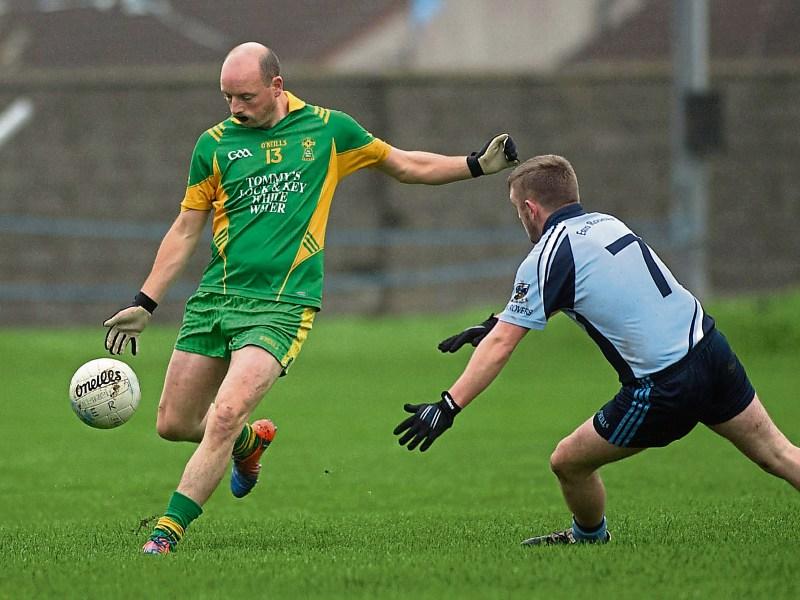 Ballymore's Eoin Kavanaghe looks to get his shot away with Declan Buckley of Erin Rovers, in the Leinster Club JFC. Photo: Ger Rogers/Adrian Melia Photo

The history books may record 2017 as a successful year for Ballymore Eustace GAA club, who bounced back out of the junior ranks at the first time of asking – but they had their sights on even more, as captain Michael Stewart Byrne ruefully reflected after their Leinster club defeat to Erin Rovers of Offaly last Saturday afternoon.

“We thought we could go far this year. It was a huge shock to get relegated, we were senior not too long ago, and we were aiming to go far in this. We’re happy with the season overall but we definitely could have done better here” admitted the wing back after his side’s defeat in the secluded village of Pullough, in the west of the Faithful County.

It wouldn’t have taken much improvement for the men in green and gold to get over the line here. Despite a very slow start, they went on to dominate most of the first half and long tracts of the second, and could easily have had the game secured before the closing minutes.

Instead it wasn’t until Gary Fennell’s point with three minutes remaining that they finally took a second half lead, and they then conceded three late attacks to the home side, one of which resulted in a point that sent the game to extra time.

“We had the beating of them in normal time” was the view of Stewart Byrne. “In extra time we weren’t good enough and once they got the goal, that just killed the game off”.

Both sides were on the field when the game started at 1:54 pm, six minutes before the scheduled throw in time, but it was only Erin Rovers who were really ready to play, as they roared into a four-point lead.

Any sense of optimism among home supporters was quickly crushed however as Ballymore Eustace took over for the main bulk of the first half, striking five points of their own against the wind to take the lead for the first time, with five different players on the scoresheet.

Mark Slevin and Kildare minor panellist Niall Murphy led the line superbly for Ballymore, while further out the field the visiting side looked far more clinical and sharp with their close range passing, retaining the ball well at a time when Erin Rovers were guilty of turning over possession far too often.

Erin Rovers rallied to go into the dressing room level at 0-7 each, but with a fresh breeze set to oppose them after the interval, most observers would have fancied Ballymore Eustace to steal the win – as did their captain on the field of play.

“We had it, but defensively we weren’t good enough” he said afterwards.  “We let them go back in front against the wind after going in level at half time, we didn’t utilise it as well as we could have. Once we got to the half way line we were slowing it down a bit more and that was the main reason we threw it away”.

After coughing up three of the first four points of the half, Ballymore Eustace were finally fired into life when Caolan Halpin Graham sent a skyscraper of a kick over the bar.  Eoin Kavanagh had one goal-bound effort punched away by the home keeper, and Mark Slevin punched the ball over the bar when he could have gone for more, but even without the impetus that a goal would have provided, Ballymore Eustace were now on top once again.

Still, when Gary Fennell split the posts with three minutes left to make it 0-12 to 0-11, the signs were good for the Kildare JFC winners.

They retreated into their shells however and were lucky to only concede a point to Declan Cooney when he pounced on a breaking ball in their penalty area. Rovers missed two other chances and once extra time came around, the home side found another level.

Gio Russo, Ryan Delaney and Nathan Poland kicked fine scores before half time before Poland summed up the change in mood by winning a free (which he converted) between two defenders immediately after the last interval.

Tom Spain then sent the crowd into raptures when he slammed the ball to the net following Paddy Murphy’s save on Stephen Buckley’s initial attempt, and while Niall Murphy cut the gap slightly with a late free, a second yellow card for veteran forward Eoin Kavanagh ruled out whatever slim chance the Kildare club may have had of salvaging a remarkable escape from a thrilling encounter.