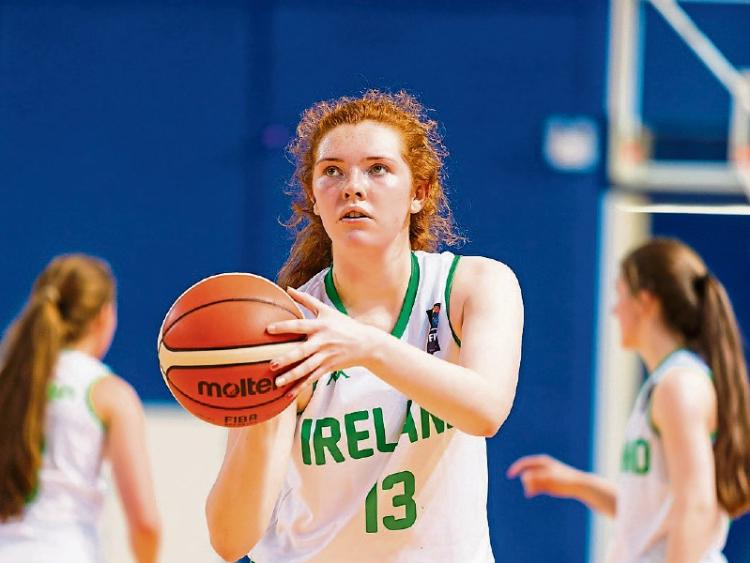 Kildare’s Claire Melia and Sorcha Tiernan made history yesterday as two of the stars of the record breaking Ireland U18 Women’s basketball team, who became the first ever underage Irish squad to come through the group phases of a European Championship unbeaten.

The team recorded their fifth consecutive victory of the FIBA U18 Women’s European Championship Division B yesterday, finishing out 20-point victors over Ukraine (77-57) to remain top of Group D and march on to the quarter-finals unbeaten.

The tournament hosts now advance to Friday’s quarter-final clash where their likely opponents will be Israel.

The side is enjoying a well-earned rest day today, and Coach Tommy O’Mahony is looking forward to the break after an extremely tough test against Ukraine.

“That was the toughest game we’ve had in the tournament so far,” he said. “It was certainly the first time they were really tested. They hit seven shots in a row to really dig themselves out of a hole and it’s not something we’ve done so far. It’ll serve us well heading into the quarter-finals.”

Indeed, Ireland struggled early on to get to grips with a physical Ukraine side, with 6’5 centre Tetiana Havrylchyk causing them a lot of problems inside.

Foul trouble gave Ukraine 11 points from the free-throw line and they drew level at 15-15 with a determined drive from Viktoriia Kovalevska after seven minutes in the first – the closet any team has got to Ireland so far in this championships.

Cool heads prevailed for the girls in green, and one of the stand out stars of the game, Meath’s Rachel Huijsdens, kept her calm under the boards and pulled down some huge rebounds to send Ireland back into the lead by the first buzzer, 24-17.

A controlled second quarter followed, with Ireland dictating the pace of the game and Huijsdens, Maeve Phelan, Louise Scannell and Bronagh Power Cassidy delivering on both ends of the court and shooting well from the perimeter to see Ireland lead 47-30 at the half.

Ukraine were determined not to go down without a fight though, and soon had the game closed back to seven points. Huge scores from Sorcha Tiernan and Louise Scannell settled Ireland once more, and a Dayna Finn steal proved crucial to keep momentum with the girls in green to drive on home to a 20-point victory in the end, 77-57.