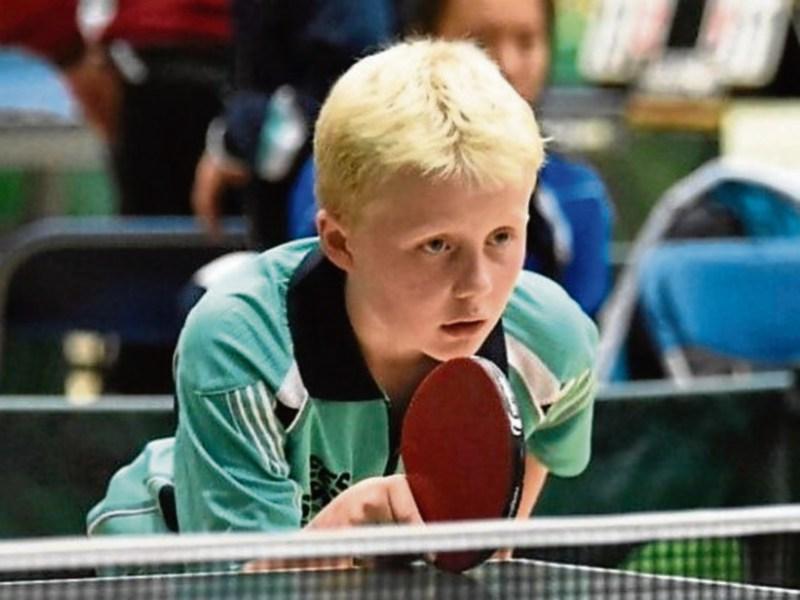 Art McLoughlin, a 13-year-old rising table tennis star from Leixlip has also been given the fantastic opportunity to travel to China to train for a month in advance of the new season.

It all came about following major success for Ireland at the 60th European Youth Championships as the Irish Cadet Boys team set the tournament alight in Guimaraes, Portugal.

For the first time in the modern era, the boys became the only Irish team to ever reach the elite, Top 16 Division following an astonishing run of results throughout the championships, before eventually finishing the event in an unprecedented 10th place!

Starting in a group of four teams including Ireland, Slovenia, Cyprus and Iceland, the Irish team of Owen Cathcart, Art McLaughlin & Thomas Joyce were in good form right from the off as back to back 3-0 wins set up a group decider over the strong Slovenians.

This was always going to be a tough one for the boys, as they faced a side that got the better of them by a 3-2 score line at last year’s event in Zagreb. With the score level at 1 match apiece, the doubles was crucial and the pairing of Owen and Art stood tall when it mattered most to take a 3-1 win and give Ireland a 2-1 advantage. Another singles win to Ireland made it 3-1, and this result sent the boys into unchartered territory, as they now faced a playoff match for a place among the best 16 countries in Europe!

The draw could have been kinder, as they were pitted against Spain in what was a massive match! Owen and Art were in for both the singles and doubles on this occasion. Owen got Ireland off to a good start, defeating the Spanish number 2, 3-1. Art then went in and put on the performance of his life, pushing number 1 player Guttieriez (ER30) all the way before eventually losing by the tightest of margins after 5 sets. Again the boys now faced a crunch doubles and Art & Owen duly delivered, taking it 3-1 following some excellent play. They picked up the next singles match to win a score line of 3-1.

In the last 16 the boys were up against the 4th seeds and highly fancied Belgium team, who boasted a line-up capable of going all the way in the competition. Despite their underdog status, Art & Owen played an unbelievable match and pushed Belgium all the way! It was a tight match but they lost out with a 3-2 finish.

The boys couldn't afford to let up following this defeat, as they now knew that they needed at least one win in the 9-16 play-offs in order to secure Ireland's place in the top 16 for next year. They didn't disappoint, as they went from strength to strength, beating Ukraine and Croatia to put themselves into the playoff for 9/10 position.  In the final playoff match, Art and Thomas, battled it out versus the strong Czech team for 9-10 place. Despite the superior ranking of the Czechs, the boys played some great stuff.  Nonetheless, despite a titanic battle the boys finished in 10th place following what was an amazing event throughout - what an achievement!

Art McLoughlin is very committed to his sport and in order to help meet some of the huge costs involved for this talented young player in training and travelling to represent Ireland at International level, a fundraiser has been set up.  If anyone or any businesses would be willing to donate or help meet these costs in anyway please go to  https://www.gofundme.com/arts-table-tennis-ambitions