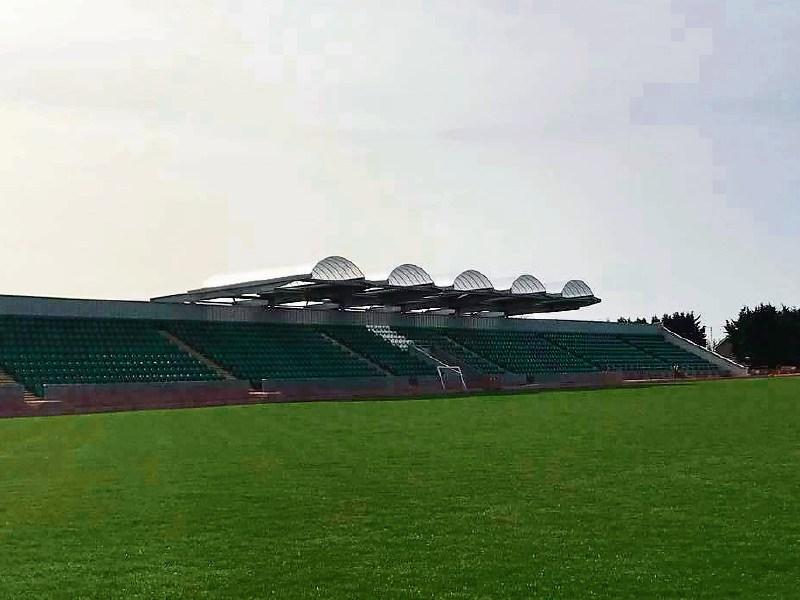 The new stand at Ruislip

A few years ago, St Gabriel's, a London GAA club with Galway roots, were playing in the intermediate hurling championship in Ruislip.

St Gabriel’s had 15 players and no substitutes. Just before half-time they lost a player to injury and the referee told their manger Kerril Burke that unless they lined out in the second-half with the full 15, they’d have to forfeit the game.

So at 78-years-young, Burke pulled on a pair of boots and subbed himself on as a corner forward, dressed in a pair of jeans.

He’d a quiet 30 minutes. But as the game went into injury time he took up position on the edge of the square.

The ball was floated into the square and three or four flakes later, the green flag was up and the ball was in the back of the net.

Burke was mobbed by his team mates.

He’d scored the winner. They carried him shoulder high all the way to The Man of Aran pub in Rayners Lane.

The following week, he appeared on the Ray D’Arcy show. And there’s another rumour that Burke featured in a piece about longevity in the lifestyle section of the New York Times.

I’ve yet to read that one.

But his story is just one of a million crazy tales from what will now be known as the old Ruislip, because on Sunday, London GAA celebrate the opening of their new grounds when the county footballers play Leitrim in the Connacht SFC hampionship.

For as long as I’ve lived in London, some the GAA’s older gaels have been trying to get this stadium built on a patch of land that’s hosted a GAA team from the Metropolitan Police, championship games completed in the dark, tons of players togging out under assumed names, Braveheart-like melees and appearances from Southampton’s Shane Long, Offaly’s Brian Cowan and Valentia’s Mick O’Connell, to name but a very few.

The field of play has hosted everyone from Ja Fallon to Colm Cooper to Stephen Cluxton and on Sunday, Tyrone’s former frontman, Eoin Mulligan will line out for London against Leitirm.

Off the top of my head, the last Kildare man to line out for London in the Championship is Richie Ormsby from Naas who played for London in 2009/10.

But Naas and Kildare have some recent history when it comes to London GAA.

I remember walking to the grounds in west London to cover a game one Saturday evening in 2011 when a white van drove by and tooted its horn.

When I got to the grounds, Jimmy Kinlon from Naas was stood in the car park holding a hurl.

He’d been working in Milton Keynes and drove down to line out for Father Murphy’s.

He’d won a senior championship with the Murphys, back in the early 2000s when London club hurling was competitive enough to make that a victory worth celebrating.

Jimmy’s brother Erik Kinlon was playing that afternoon too. He later left London to work in Australia.

Then, the London club hurling championship was hard won.

In 1995, two brothers from Kilkenny came up short in the final when they lined out for The Brothers Pearse. Andy and Martin Comerford then went on to win 10 All Irelands with Kilkenny.

There are others from Naas who won senior hurling championships with the Murphys, like Paddy Dowling from Eadestown and Eamon Leamy from The Paddocks.

Prionnsias Redican from Leitrim has helped run the Tara club for decades, and his home in Willesden Junction was once a lodgings for Meath great Ollie Murphy, and later, a sanctuary for Kildare’s former manager, Jason Ryan.

Redican worked as a fashion designer on Savile Row, and he could talk for hours about the style of Seamie and Joe Harrison from Kildare who put the London Kildare club, Round Towers, on the map in New Eltham in the 1950s.

Once, there were almost 60 GAA clubs in the city. That number is under 30 now, and I’m sure there’s plenty of Kildare connections in that collection I’m unaware of.

From 2008 -2012, I spent most weekends in Rusilip reporting for The Irish Post and could name players by sight.

Then I changed jobs. And while I don’t miss the winters, I miss the stories.

I remember London playing Galway in the Connacht Championship in 2014 and Sky Sports arriving down to cover the game. It was the first year they won the rights to televise Gaelic games and they were keen to support their local team.

So they parked up their hi-tech truck and hurried about looking for team sheets, WiFi, and somewhere to sit down to file their article.

Of course they struck out on all three.

But then Rusilip’s rough edges have always been part of its charm.

On the eve of a new chapter, some of the Kildare names above can testify to that.

And many many more reading this article, no doubt.