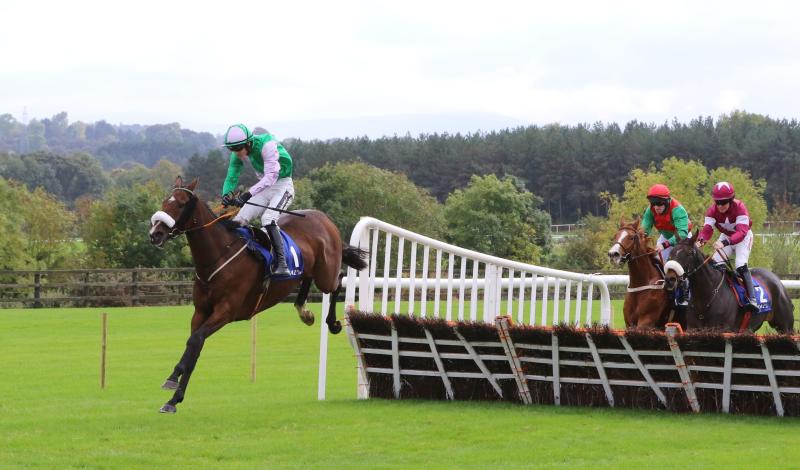 SHIN A VEE (2/1) is a specialist in this race. He's won it on three separate occasions and finished runner-up twice in six runs. He seems to be laid out for it because having won it well in 2015, he did not appear on a track again until the Punchestown festival in 2016 when he beat ENNISKILLEN by five lengths. Once more, he hasn't run since, but with a five-pound claimer on his back, he's more than capable of repeating the trick for a fourth time. ENNISKILLEN re-opposes yet again having won here just four days ago. It's unusual for horses to win twice during the Punchestown festival week, but ENNISKILLEN didn't get a hard run in that first win and can get competitive again here. HASTY TIMES wears a first-time tongue strap and following a good run to be third in this last year, he can become the main danger to SHIN A VEE.

Paul Nicholls has a rare Punchestown runner in this in the shape of the ever-consistent LE PREZIEN (6/1). He put a rare blot on his copybook at Cheltenham last month when he was 12 lengths behind ROCK THE WORLD in the Grand Annual. Before that he was a good third behind TOP NOTCH at Sandown in February. He probably wants softer ground and so can be opposed. DIAMOND KING (6/1) will be popular for Gordon Elliott and he always gives a good account in big handicaps, but the one I like is WOODLAND OPERA (6/1). The ground is a question mark, but he has to be taken very seriously given the fact he'll represent the seemingly unstoppable Harrington/Power combination. He also has top form in the book as he recently finished third behind the hugely progressive GREAT FIELD at Leopardstown, and that one won well on Thursday. DON'T TOUCH IT was second in that earlier race with WOODLAND OPERA just a further length down in third. DON'T TOUCH IT seriously franked the form with a good win at Punchestown on Thursday, and the powerful trainer-jockey pairing can get themselves in the winner's enclosure once more with this one.

A very competitive renewal of a race won last year by DEFINITE RUBY (10/1) for Gordon Elliott and Jack Kennedy. They team up on this one here again, but he carries more weight now and could be vulnerable. SLOWMOTION (4/1) for Joseph O'Brien is the likely favourite having won on three of her last five visits to a racetrack. She's far from a solid favourite and the race remains open to a few of the other less exposed runners. GIRLY GIRL (11/1) catches the eye from Jessica Harrington's yard. Harrington runs three here, and they are all interesting, but GIRLY GIRL (11/1) just gets the vote. She fell twice in February, but after a 53-day break, returned with an excellent third behind SLOWMOTION. That was on similar going as today and she gets an eight-pound pull in the weights with the same rival in this race. With Robbie Power on board, this one could be massively overpriced and could easily run into the money. ELUSIVE IVY (15/2) is the other very interesting one coming off the back of three very strong runs recently, including a good win last time out.

The feature on Day 4 is the Champion Hurdle and it is an ultra-competitive renewal where a host of stars take their chance. The unbelievably quirky LABAIK (14/1) has been added to the field here having refused to race on Tuesday, but on his day, he is exceptionally fast and could figure if he doesn't plant himself at the start. PETIT MOUCHOIR (10/3) was a good third to BUVEUR D'AIR in the Cheltenham Champion Hurdle and is the current favourite now, but the horse that finished ahead of him that day, the runner-up MY TENT OR YOURS, is here to take his chance and could go very well on the ground. Nicky Henderson is also represented by BRAIN POWER who was disappointing when expected to go well in the Champion Hurdle last month, but VROUM VROUM MAG (5/1) can conquer them all in this race for the second year in a row. She beat IDENTITY THIEF in the same race in 2016, and looked very good finishing second to APPLE'S JADE in the Mare's Hurdle at Cheltenham. Getting the mare's allowance here means she carries seven-pounds less than all her rivals. She's never finished out of the top two in her entire career and I think she can vanquish the field here.

A couple of very interesting runners here, but FINIAN'S OSCAR (7/4) gets my vote. I think this well-bred five-year-old is a special horse in the making and can take advantage of a few misfiring rivals. DEATH DUTY (4/1) was all the rage at Cheltenham before unseating in a race won by PENHILL. While he could bounce back and is probably going to be very good in time, the manner of his run at Cheltenham wouldn't inspire confidence. LET'S DANCE was impressive at Cheltenham but went on to lose to AUGUSTA KATE at Fairyhouse. The season may be catching up on her, while her stablemate BACARDYS is admirable, if not exceptional. FINIAN'S OSCAR is taking another step up in class having won well at Aintree, but the Colin Tizzard trained gelding is still unbeaten with five wins from five under his belt. He will go on to bigger and better things and I think he can continue the winning thread here.

BALNASLOW (3/1) was fifth in the Cheltenham equivalent of this and second at Aintree, and is admirably consistent. ON THE FRINGE (9/4) has won this event for the last three years running but needs to bounce back now if he is to make that four. He was just two lengths (4th) behind PACHA DU POLDER in the Cheltenham race, but was pulled up in Liverpool and that's a negative. However, Enda Bolger is a master at nursing horses back to form and ON THE FRINGE has won five times from six runs at Punchestown. He just loves the place and had he run anyway credibly at Aintree, would probably be an odds-on favourite here. 9/4 is a decent price and with the in-form Jamie Codd on his back, he can certainly recapture winning form now. SIR DES CHAMPS is a high-class chaser who is interesting in a race like this, but he's been on the road a long time and his best days are behind him. Although capable, he wouldn't make my front three, and I actually rate MENDIP EXPRESS and HOME FARM the main dangers.

CASTLEGRACE PADDY (7/2) will be popular in this contest having slammed SIZINGUPTHEAMAZON in March, but his best form has come on ground much softer than this. Therefore he can be opposed at the odds with RIVEN LIGHT (4/1). Ruby Walsh hasn't had much luck this week, but can get his head in front with this one for Willie Mullins in the Rich Ricci colours. He's been fourth in both of his most recent starts, and on both occasions, BLEU BERRY was the winner. There was enough to like about those performances, however, especially at Fairyhouse earlier this month, when he was within four lengths of the winner. He stayed on well that day and could arrive late here to claim the prize. His stablemate MONTALBANO is probably the biggest threat, and Mullins could conceivably have the front three in this, with CHATEAU CONTI also rated highly.

BEYOND THE LAW (4/1) will be strong in the market having followed up a Nenagh point-to-point win in January with a good second behind Gordon Elliott's MINELLAFORDOLLARS at Navan in March. He was sent to Mouse Morris after his point-to-point success and will be well tuned up now for this 2m 2f trip on the flat. MOYROSS (5/1) for Noel Meade could very well follow up a good second on debut with a win here, but I think Patrick Mullins could ride the winner for David Pipe. WARTHOG (11/2) won a Lingstown point-to-point by 10 lengths in December and was second in a similar event to today at Chepstow on his debut for David Pipe. That race hasn't had time to work itself out in terms of form just yet but it's interesting that David Pipe and the owners have decided to bring him here for this race, particularly because Pipe had the winner of this race two years ago with CHAMPERS ON ICE. FLEMENSKILL (15/2) can also go well for Warren Greatrex in what looks a very competitive race.