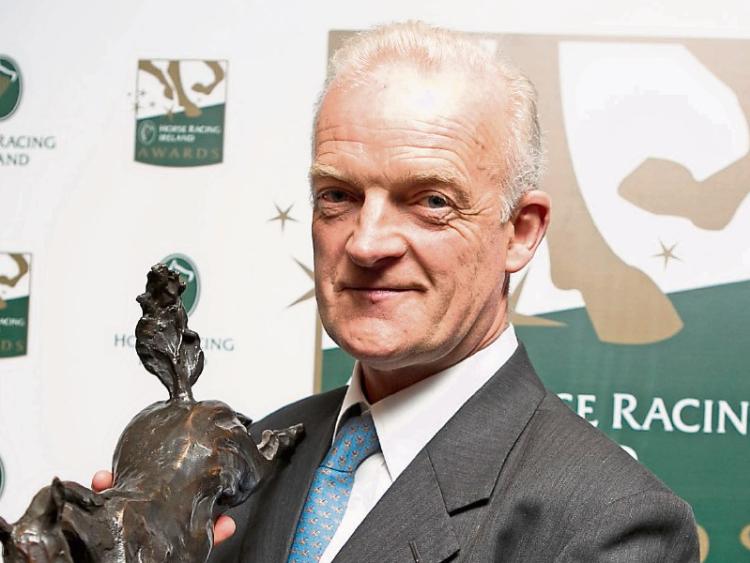 IT’S been well documented Willie Mullin’s lack of luck when it comes to the Cheltenham Gold Cup. He’s won the Champion Hurdle, three of them in fact. One Aintree Grand National has gone his way and he’s even managed to bag big pots in America and Japan. But it's National Hunt’s blue riband which he wants to win most and, up to now, he’s been horribly out of luck.

In total, Willie has trained six second-placed horses in the Cheltenham Gold Cup. Florida Pearl, possibly his best three mile chaser to date, was his first major contender for Gold Cup honours in 2000 but he finished second to Looks Like Trouble, one better than his position 12 months earlier.

In 2006, Hedgehunter played a huge part in helping an Irish 1-2-3 but he could only split War Of Attrition and Forget The Past on that occasion. He did go one better in the Aintree Grand National on his next run however.

It’s been in recent years when Mullins may really have been rueing his luck in the festival feature though.

Many thought that Sir Des Champs would end the Mullins drought in 2013 when he was sent off second favourite for that year’s renewal. However, Bob’s Worth and Barry Geraghty proved too hard to beat. It’s been a similar story for the last three years too.

In 2014, On His Own was agonisingly beaten by Lord Windermere and then after a stewards’ enquiry, when many believed the Mullins inmate would be given the race, the result stood. Mullins, and Graham Wylie, could have appealed the outcome but decided not to. For the last two years, Mullins has relied on Djakadam and as hard as he has tried, he too has found one too good for him up the Cheltenham hill.

This year will see Djakadam try and make it third time lucky and while it can be done, as The Fellow showed in 1994, he’ll be a big enough price to pull it off. Its next year’s renewal, the 2018 Cheltenham Gold Cup, when Mullins may finally have the racing Gods shining on him though. Much has been made about Douvan being the horse that Willie Mullins has always been waiting for. He’s been brilliant but we won’t see him over three miles this season and one wonders will we ever see him be campaigned towards a Cheltenham Gold Cup. That mightn’t be the end of the world for Mullins however as he could well have an able deputy in Yorkhill to step up to the plate next term.

To date, Yorkhill has done nothing wrong. He was brilliant as a bumper horse and even better as a novice hurdler. His victory in the Neptune Investments Novices’ Hurdle against Yanworth, who many thought was unbeatable, was different class. Then he put up an astonishing performance to win at Aintree when very few horses would have won, given how hard he pulled throughout the race. That naturally took its toll on him when he underperformed at the Punchestown festival. He’s now two from two over fences and after his Leopardstown win, he’s on course for the JLT Novices’ Chase in March, despite failing not to convince everybody at Leopardstown.

Given the negativity surrounding Yorkhill’s win last Sunday, what would all these knockers be saying had he got beaten? Remember, Vautour wasn’t overly impressive when he won the same race in 2015 before going on to put up a magnificent display in the JLT Novices’ Chase. Many consider that performance as the greatest ever put up by a novice chaser at the Cheltenham festival. Going back to Yorkhill’s win last Sunday and the clock tells you all that you need to know. A Toi Phil was possibly the most impressive winner on the card in the Leopardstown Chase when he motored home to grab a last gasp win. However, as fast as he was going late on, Yorkhill still managed to clock a faster time from the fourth last fence to the winning line and remember, Yorkhill never came off the bridle either. Maybe his running style will mean that we’ll never see Yorkhill run over 3 miles plus but remember, he’s won a point-to-point over three miles before he ever set foot in Closutton. If he can win a Neptune Investments Novice’s Hurdle, he’s perfectly capable of staying the Cheltenham Gold Cup trip.

Of all the horses in training right now, Yorkhill is at the top of my list. I genuinely think he’s one of the best horses Willie Mullins has ever trained. He’ll win the JLT Novices’ Chase on March 16. Come the 2018 Cheltenham festival, he could be the horse to give Willie Mullins the biggest win of his career in the greatest test of them all.