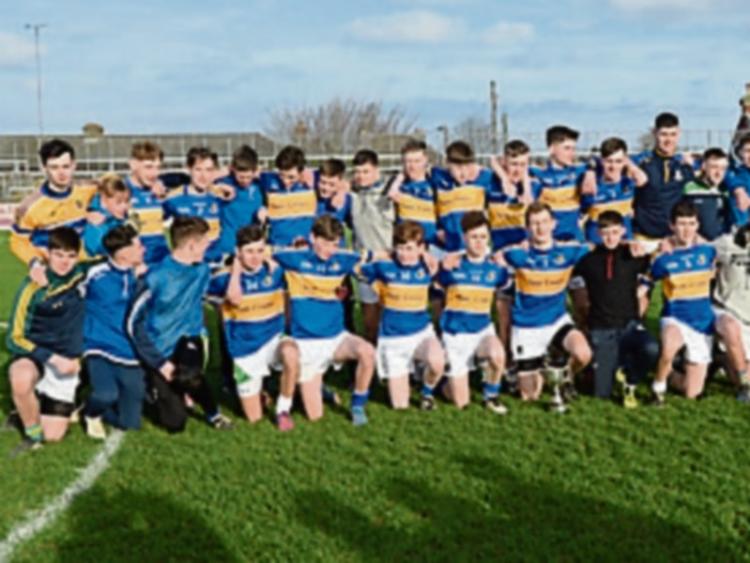 Trailing 2-7 to 0-7 with six minutes remaining all did not look well for the Naas School but buoyed on from goals by Paddy McDermott and substitute Drew Costello they finished like a house on fire to secure the win.

Roared on by a large support Naas ended up getting 2-3 on the board in those final minutes with Clane only managing to get a solitary point during that vital period of the game.

It was Naas who started the brightest when they opened the scoring in the opening minute with Eoin Conneff landing a fine free but after that point it would be another twenty minutes before they threatened the scoreboard again.

Clane playing with the aid of a very strong breeze then began to take control of proceedings as they racked up five points on the bounce.

The ever effective Shane O’Sullivan started this run when he pointed a free and he also kicked one from play and between these scores midfielder James Behan scored to leave Clane with a two point advantage ten minutes in.

O’Sullivan would kick another point after he was originally denied a goal by a great save from Aaron Lawler in the Naas goal. This point was then added to by a brilliant score off his left by Sam McCormack and Clane looked to be in control.

Naas to their credit kept at it though and reeled in the lead before the break with Conneff scoring a fine curling effort as well as Craig Johnson and Sean O’Domhnaill also pointing.

O’Domhnaill point was one that really got away as the goal was gaping but his shot was too high and Clane went in with a narrow 0-5 to 0-4 half time lead.

Naas who had the wind at their backs were flying at the start of the second half as firstly dangerous full forward Craig Johnson got inside the Clane rear-guard but his goal bound effort could only find the side netting.

It was a real too and fro game and that continued as firstly O’Sullivan landed another  free to level matters before Clane got the opening goal of the game when Conor Ward buried to the net after some good build up play by Dean O’Shea.

Johnson hit back with a point for Naas but Clane had all the momentum at this stage and Ward pointed after his original effort was blocked before Eoin O’Hehir fisted in a second goal in the 52nd minute after a sublime ball across the square by O’Shea to give them a six point lead.

Clane had no time to rest on their laurels however as Naas hit back immediately with Paddy McDermott scoring a rocket of a goal off his left foot before substitute Drew Costello then hit 1-2 without reply as he moved his team into a two point lead.

James Behan hit back with a point for Clane but an excellent long distance effort from Craig Johnson ensured Naas held on for a famous win.