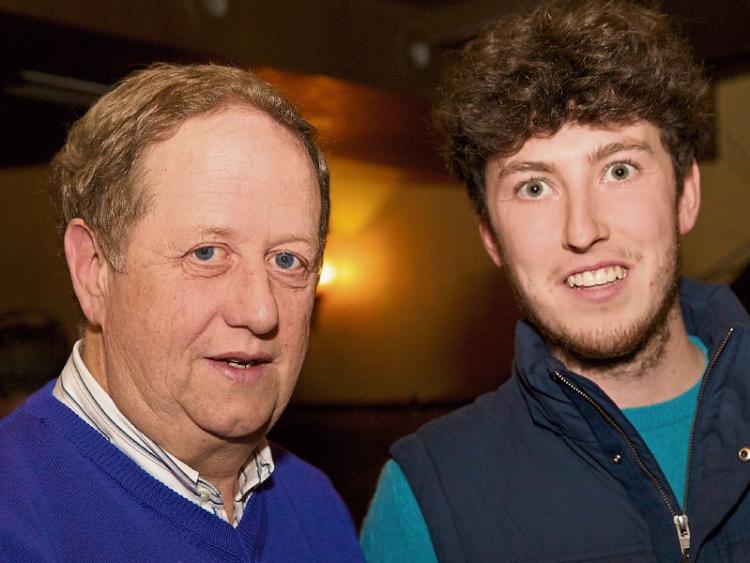 At the launch of the Lawlors Grade 1 Race Day at Naas this Sunday, Peter O'Hehir with his son Conor

These are real exciting times for Naas Racecourse as earlier in the year a major redevelopment has been approved by the Board of Horse Racing Ireland (HRI) under its capital development scheme.

Grants, totaling €1m have been given the green light for the Co. Kildare track, one of the most progressive racecourses in the entire country.

The completed project at Naas is expected to come in around €2.6m which includes the stand next to the parade ring being demolished and a modern curved structure built, incorporating a public ground floor bar, a first floor owners' and trainers' bar and restaurant and roof terrace giving race goers view over the parade ring and the track.

The roof covering will be a folding design to allow lowering or erecting according to weather conditions.

However prior to all that the track will be hosting the Grade 1 Race day featuring the Lawlor’s Hotel Novice Hurdle on Sunday January 8.

Speaking at the launch of the big day Dermot Cantillon, Chairman of the Board said “we have made a lot of improvements at Naas over recent times and now are  about to bring that a step further as we plan to move Naas Racecourse into the 21st century and it won’t be too long now before we will be celebrating our centenary.

“We were founded in 1922 so this year we will be just five years away from that date and I think it is very important that this generation makes its mark and we will now be bringing the course and the facilities up to the next level.”

It is absolutely vital to keep facilities up to standard, especially when competing with the likes of Punchestown, the Curragh, Leopardstown etc added the chairman.

“I think we are treating it like a theatre” added Cantillon, “first and foremost you have to get the stage right and that’s the track, so we have spent an awful lot of money on the track in recent times; we have done a fabulous job on the first two furlongs of the six furlong straight, including 2.5 km of drainage and more remedial work on the back of the track over the summer months, so I think we have got the stage right.

“The actors are coming and now we need an audience and that is what the improvements are all about, getting Naas Racecourse back into the Naas people  and this particular race meeting on January 8 is all about that as well because we have been given the leadership by Lawlor's, by Jack (Tierney) and his team  and we have a number of businesses in the locality and in Naas particularly coming on board and making it a real Naas day.”

Manager Tom Ryan said “it is very important to get Naas businesses involved and this year we have six, seven maybe eight businesses on board, with more coming on week by week, a huge spread including The Aria Boutique, Jingles Jewellery and Hats, on the food end we have Eastcoast Seafood, the Lemongrass, Rushes Super Valu; from the top of the town Goulding's Hardware; Tuckmill Gallery and a few more to be announced over the next few weeks also so it is all hugely positive and there is a little bit of an atmosphere around this, Naas is really getting behind us and we want to welcome everyone with open arms.”

Tom added that “with the development about to start we have had great fun over the past six months or so mapping out what the customer experience is at Naas, right down to the seating, the types of food, beverages, really everything that makes up the experience of at a day at Naas Races; we are always pushing; we are always trying hard and when we get this new development out of the way we will keep pushing the bar higher in other ways .”

It is great to be involved with a place that is so progressive, things are happening; a place where everybody keeps moving and I don’t think you will find anyone at Naas Racecourse that does not want to standstill and admire what is there; we always want to push on and do better added the popular racecourse manager.

Of course like most big race day events, fashion plays an ever increasing role and on the Grade One Race Day on January 8, fashion will also be centre stage, sponsored by Hugh Stratham Jeweller & Goldsmith of Naas.

Top model and TV Presenter Glenda Gilson will be one of the judges on the day, along with Barbara Power of the Irish Independent and Jennifer Stevens, Editor Irish Country Magazine.