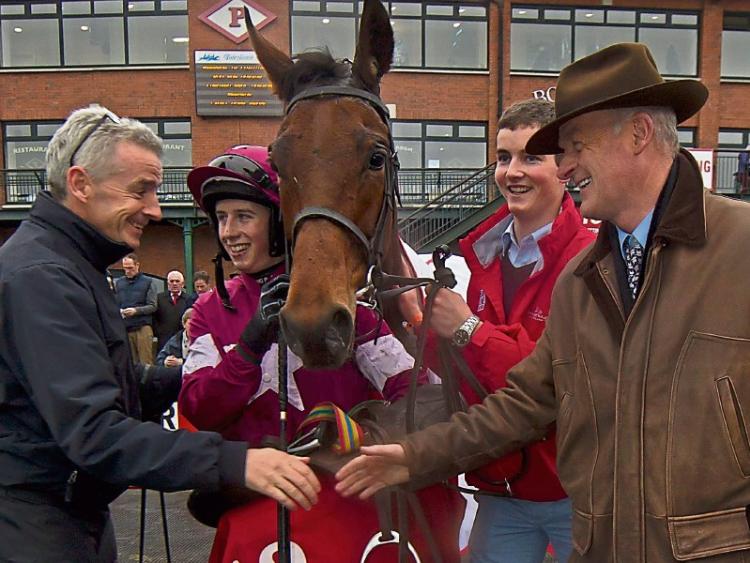 FROM St Stephen’s Day onwards, the Christmas festival of racing kicks into a gear that we have yet to see since the Punchestown festival back in April. Four thrilling days of racing on both sides of the Irish Sea and while some high profile stars will be staying stable bound, it still promises to be a Christmas not to forget on the track. Here’s a few horses to hopefully make it pay, writes ROBERT CATTERSON.

On Sunday morning, Valseur Lido had the Lexus Chase as his number one target next week. Then came the news that Coneygree would miss the King George VI Chase and suddenly, there might be an Irish runner in the Kempton contest after all.

As it stands, a procession awaits Cue Card next Monday as he bids to double up in one of jump racing’s most famous races. Tea For Two, Silviniaco Conti and Josses Hill look like the only other certain starters and Cue Card looks well capable of taking care of that trio.

However, Valseur Lido would be a worthy challenger and should connections think that way too, we may have a proper race after all.

Whatever happens, Valseur Lido will line up somewhere over Christmas, with the Lexus Chase, another race he holds a leading chance in, also in the mix.

Willie Mullins has yet to have a juvenile hurdle winner this season but that could change over the festive period. The Grade 2 Frank Knight Juvenile Hurdle is always a hotly contested race and Mullins’ recent Fairyhouse runner-up Bapaume is likely to have this prize on his agenda.

A close second to Landofhopeandglory in the Grade 3 Bar One Juvenile Hurdle at Fairyhouse, he’s got an excellent change of reversing the form with that runner next week.

A combination of match practice and a better round of jumping should see the Ricci representative collect in a race won by the Mullins-trained Apple’s Jade 12 months ago,

The highlight on Down Royal’s St Stephen’s Day card has always been the Hunters Chase and this year will be no different. Always a good guide towards the Christies Foxhunters at the Cheltenham festival, this year’s renewal could feature a new contender for major hunters chase honours in the months to come.

When trained by Gordon Elliott, Valmy Baie was a moderate hurdler to say the least. However, since his introduction to world of point-to-points, he’s been a revelation with six wins to his name in less than a year. However, it was his latest victory at Kirkistown which has plenty of people still talking.

Left some 30 lengths at the start, the seven-year-old still managed to triumph and will take plenty of beating up north next Monday.

Willie Mullins has another decent bunch of novice chasers this season but the surprise package so far has been Haymount, which arguably put up one of the best beginners chase performances so far this term.

The son of Presenting has only ran nine times and beat the subsequent Grade 1 winning Coney Island at Punchestown on his chasing bow. He’ll have numerous targets over Christmas but don’t be surprised if he lines up in the Grade 2 Shannon Airport Novice Chase at Limerick on December 26th.

Willie Mullins generally targets this race with his better novice chasers and Haymount is well capable of taking this prize on his way to bigger things.

Possibly not a familiar name to some but Bargy Lady could be another of the Willie Mullins brigade to run at Limerick’s Christmas festival. An easy winner of her debut at Listowel, it was her third start which caught the eye when she took her place in a red-hot mares maiden hurdle at Wexford last month.

Holding every chance at the second last, the daughter of Yeats blew her chances with a bad mistake and will surely learn from the experience. The Crecora Mares Maiden Hurdle on December 27th looks tailor-made for this speedy mare and she should have little difficulty in taking this contest before taking in some graded action later in the season.

One of Willie Mullins’ newest recruits but plenty of his Irish racing folk will know the nine-year-old from his days with Michael Hourigan. However, it was on his only start for the champion trainer which put The Crafty Butcher into many a notebook when staying on strongly to finish an eye-catching third in a competitive handicap hurdle at Navan last month. The stiffer test of next week's Paddy Power Chase will be right up his street and with a very similar profile to Mullins’ 2013 winner Rockyaboya, The Crafty Butcher has a serious chance of landing one of the most competitive races over the festive period.