Newbridge Town up to second in LSL

Town back in action at home this Friday 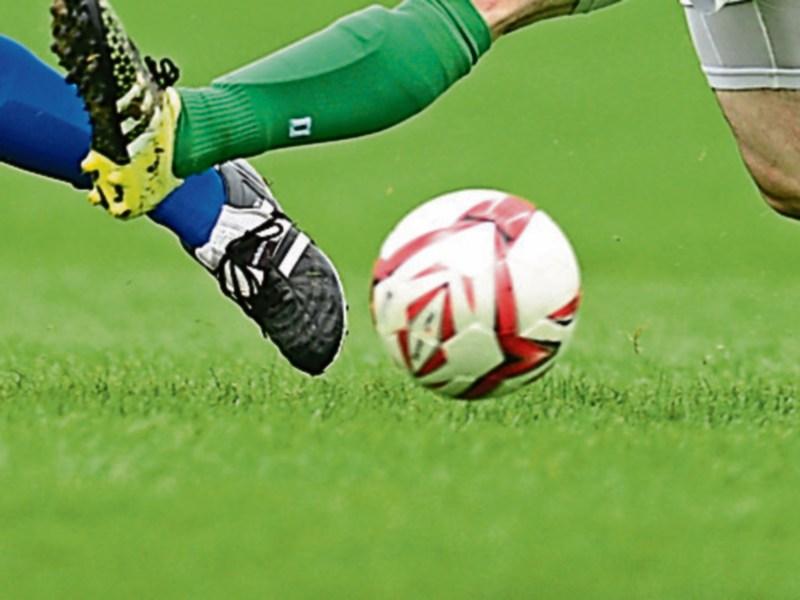 Newbridge Town moved up to second place following their recent 5-0 win over Glenville FC in the LSL Senior 1.

From the off it was a competitive game with some very full blooded tackles. It was Newbridge who took the first chance of the game. Following some confusion in the Glenville defence which saw the defenders stop for what they thought was an off-side. However, the ref did not blow his whistle and the game continued and Kenny Carr added yet another goal and give the home side the perfect start.

Dave Riordan was having a particularly effective game in the middle alongside Mick McDonnell. In one move a good exchange between McDonnell and Riordan put Glenville on the back foot with a great pass releaseng Ethan O Neill.

The danger was paused as the Newbridge man was pulled back resulting in a free kick and a yellow card. It would prove to be a very costly mistake by Glenville. Dave Riordan took the resulting free kick from the left hand side and swung in a very inviting cross. Harmony Mercer looked to win the header but he was beaten by a defender who heads into his own goal.

The home defence as also looking in very good form and it was looking difficult for Glenville to create any chances. On one foray forward, great awareness and play from the David Lane and Andrew Toner cleared up what was a dangerous situation at the back and helped Newbridge launch another attack.

As the first half moved towards a conclusion, Kenny Carr broke away and a lovely reverse pass found Mick McDonnell who brought a save out of the Glenville keeper.  The some great play from Gary Murphy on the right beats three defenders before putting in super cross which is just too high for Mark. Glenville then move play back to the other end and they have a throw on the left hand side of the Newbridge box which ends with a corner which is cleared by Big Mick but he is injured. Luckily it is not serious and he is back up.

In the final moments of the first half the tension boiled over. The ref did not see what happened but he has consulted with the linesman and it ends with a yellow for Town’s Dave O Riordan. Without much further play the half is brought to an end with the home side two goals up.

The second half like much of the first with the home side putting Glenville under pressure. Just as in the first half the home side took an early goal. This time it was Ethan O Neill who added the third to put the home side 3-0 up. Minutes later Andrew Toner came close to making it four but the keeper made a great save in a one on one. Like some of the first half, the game began to get a little rough again and there have been some very tough tackles but no cards so far in the second half.

Then against the run of play Glenville almost get on the scoresheet and only the woodwork prevents houghton losing his clean sheet. However, it is the home side who are back on the attack quickly. Another tough tackle this time on Kenny leads to a free on the edge of the box. From the resulting play another tackle leads to a free in the centre and about ten yards outside the box.

O'Neill takes the free kick which is saved by the keeper but Carr turns the rebound into the net for 4-0.

Newbridge break yet again with Carr through on the right hand side but his pass is just a little behind Murphy who shoots into the keepers hands. Moments later, great pressure from Dave O Riordan sees him win the ball in the Glenville half and only last gasp defending stops Newbridge going 5 up. But, it is only a matter of time before the home side score again. With the last move of the game Murphy slides a wonderful place through for Carr who runs on to slide the ball into the bottom right hadn't corner of the goal. It’s three for Carr and five for Newbridge.

A good performance from the home side and three big points sees the move into second position behind Portmarnock and just ahead of Home Farm.

This time Newbridge will be hoping to get some element of revenge and maintain their push at the top of the LSL Senior 1. At the other end Verona have struggled in the opening weeks of the season and find themselves in the bottom 2. Although they do have a couple of games in hand on the teams around them.