Johnstownbridge remain on course to retain All Ireland title 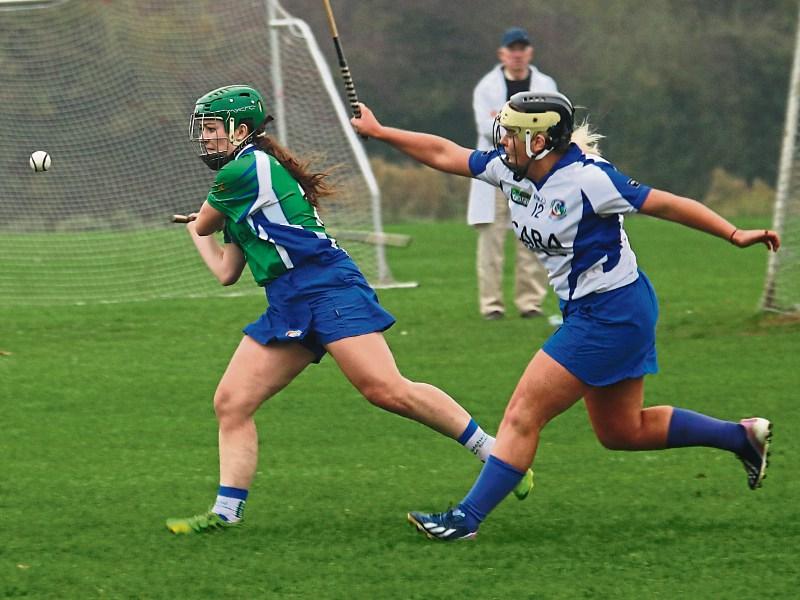 Johnstownbridge Ladies camogie team, having retained their Leinster Junior Club title defeating Kilmessan in the final, continue in their bid to retain their All-Ireland title travelled to London to play London Tara on the October Bank Holiday weekend.

Getting a squad to London on a bank holiday Sunday with two weeks notice was no easy feat but with the tireless work of Emma Flanagan Hackett and the club committee, plus the generous support of the local community, the ladies made it to London.

Due to Louise Codd and Miriam Murpy being unable to travel there were a number of changes to the team that defeated Kilmessan in the provincial final. The full forward line was Ellen Morgan, Roisin O’Connell and Sally Morrin, with the half forward lineout being Claire Hurley, Siobhan Hurley and Jenna Murphy, the final change being in midfield where Aisling Holton moved in to play alongside Clodagh Flanagan.

Fifteen minutes in and the Johnstownbridge ladies knew this was not going to be the same game as when they defeated Tara at home last year 3-14 to 0-1. The travel, rock hard ground and a number of new players on the Tara squad all contributed to the score line reading Tara 0-2 Johnstownbridge 0-1 after 15 minutes, with both of Tara’s scores coming from Maria Ryan and Johnstownbridge’s score coming from Roisin O’Connell.

Gradually Johnstownbridge began to get the measure of Tara with Siobhan Hurley converting two frees, going ahead for the first time.

Some great defending from Emma Farrell helped save The Bridge from the early onslaught from Tara. Further scores from Siobhan Hurley at 24 and 27 minutes and a point from Maria Ryan at 31 minutes put the half-time score at Johnstownbridge 0-5 Tara 0-3.

On the resumption Siobhan Hurley knocked over a point and a great block by Emma Farrell in the 42 minute resulted in the sliotar heading straight back down the field where Siobhan once again put it over the bar.

Caoimhe Keoghan was introduced for Sally Morrin at 53 minutes. Johnstownbridge were now moving up a gear and  further points from Siobhan Hurley and Claire Hurley and  a reply from Fiona Morrissey of Tara left the score reading Johnstownbridge 0-9 Tara 0-4 at 59 minutes.

Tara were not giving up without a fight and at 60 minutes Orlaith Jennings found the back of the Johnstownbridge net leaving only two points in it with two minutes extra time to be played.

Despite the small group of travelling supporters from Johnstownbridge they made themselves heard for the eight minutes added time that was actually played.

During this time scores from Siobhan Hurley, Clodagh Flanagan and a final point from Roisin O’Connell saw the Johnstownbridge girls progress to the All-Ireland semi-final against Athleague due to take place on November 13.

Despite Siobhan Hurley scoring eight points on the day the player of match has to go to Emma Farrell who made some great clearances throughout the game and appeared everywhere.

It was obvious at the end of the game how both the travel and tough game had taken it out of the Johnstownbridge girls but there is no time for resting when you are chasing an All-Ireland title so the girls will be back training on Tuesday night despite not arriving home in Johnstownbridge until Monday afternoon having left on Saturday as their flight home on Sunday night was cancelled. They don’t call the club championship the toughest for nothing.