It may all come down to the match-ups! 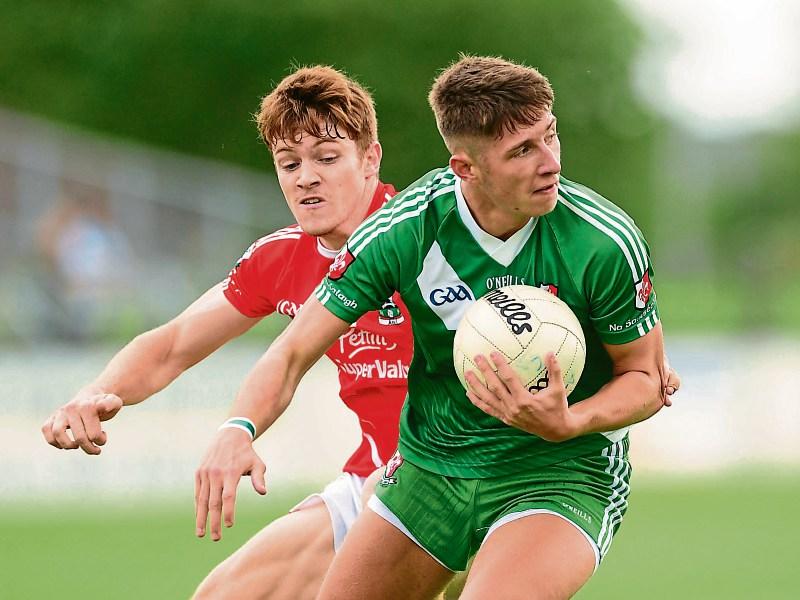 The town is festooned in green flags; some solid green, some with a white sash.

The bridge, is showing no favouritism on this occasion as the Tidy Towns committee ensure a flag apeice for both town teams.

At this stage even a stranger would guess it must be county final time.

Some (but not all) of The Sash flags look a little weather beaten, but that is understandable as this is their fifth time in as many years to make a flag pole appearance.

For The Moores it may not be five-in-a-row but it certainly a return to familiar surroundings.

Remember that since the new millennium– that rip-off time when a baby sitter commanded the price of a week's holiday– we have had sixteen senior finals; Sarsfields and Moorefield have appeared 19 times between them, The Sash in ten and The Moores nine. Moorefield have lifted the cup on six occasions in that time with Sarsfields taking it on four. While in 2006 Moorefield claimed the Leinster Club joining Raheens as the only Kildare team in the county to win provincial honours.

There were only three occasions in that period when neither of the Newbridge clubs were in the final and only once did we see two finals in a row without either side participating.

An absolute incredible set of statistics and while Newbridge can be rightly proud of their two teams, it certainly asks major questions of every other senior club in the county as to why this is the case and why no other club has made any major impact in the last sixteen years. 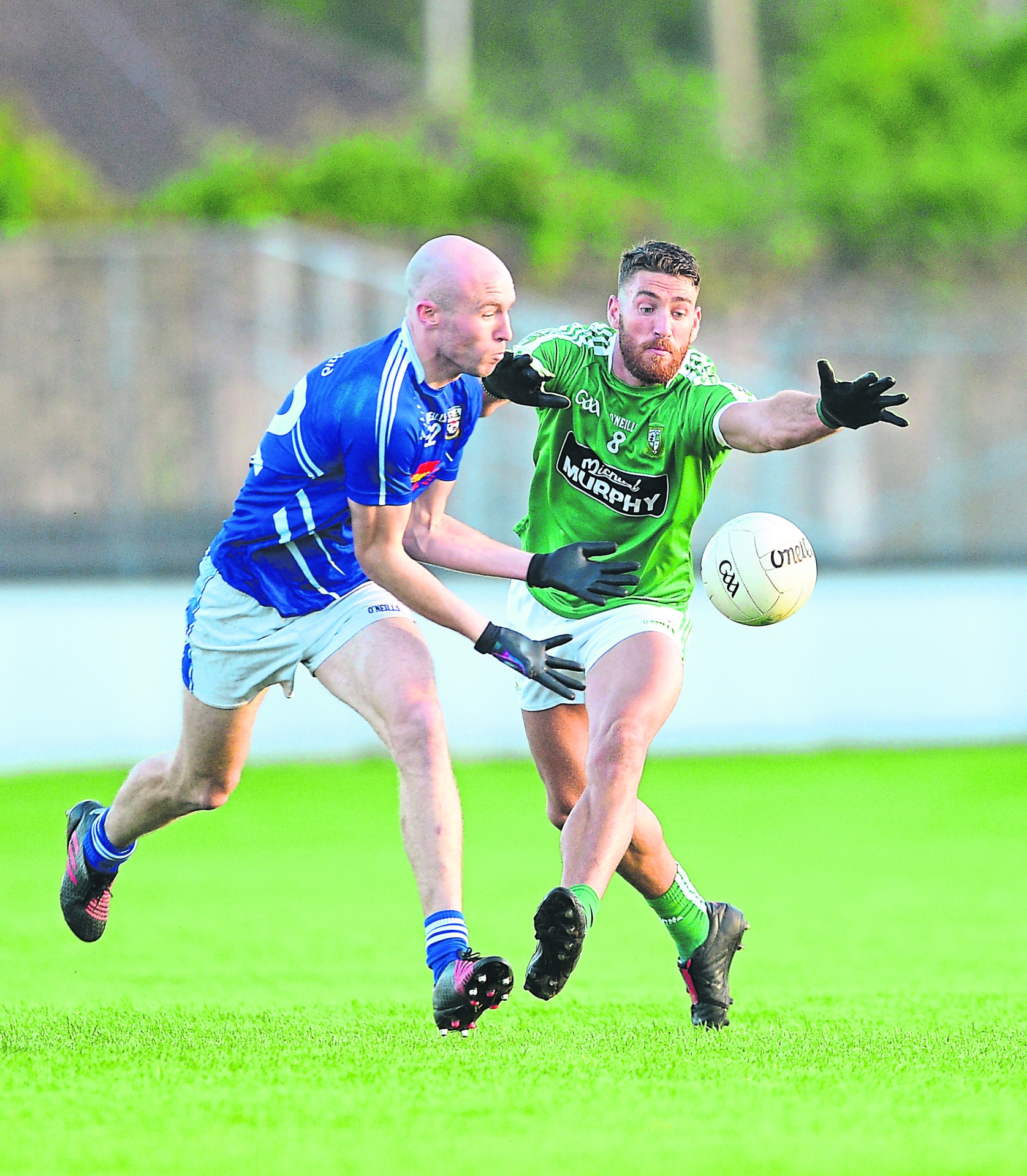 David Whyte, in action against Hugh McGrillen of Celbridg,e in the SFC semi final

Having said all that Sunday again has all the ingredients of a cracking contest. The layers, not unsurprisingly, have the title holders, Sarsfields, the fav-ourites with Cill Dara Betting quoting them at 4/6 with Moorefield 11/8 and anyone looking for a bit of value can get a draw at 13/2.

A quick look back on the paths to the final and Sars-fields came through their opening two games impressively.

Firstly they defeated Carbury, not overly impressively but nevertheless by two points (1-15 to 1-13) before getting the better of a stubborn Maynooth side (3-12 to 2-11).

Next came a quarter final clash, a repeat of last season's final, when Athy were their opponents. Unlike last year's decider this time Sarsfields tore Athy apart on a final score line of Sarsfields 3-12 to 0-13.

That was the game that really gave proof, if any proof were required, that John Crofton's side were again serious contenders and that form continued when they disposed of Confey 1-14 to 1-9, a score line that does not do justice to The Sash dominance.

Moorefield on the other hand opened with a facile win over a very poor Clane side 3-17 to 0-8 before totally annihilating Johnstownbridge 8-13 to 0-9 with Ciarán Kelly finding The Bridge net on five occasions.

On to the quarters and The Moores got the better of Paul Doyle's Maynooth 2-16 to 2-11.

On to the semi final where many felt Celbridge had the ammunition to halt the Moorefield gallop but the north Kildare side were never really at the races going down 0-11 to 1-6 in a dogged game that the boys in green never looked like losing.

And so it's on to Sunday.

Another all Newbridge clash.

Another top versus bottom of the town clash.

And hopefully another nail biting, edge of the seat, down-to-the wire clash.

For Sarsfields midfielder, Matty Byrne is expected to be available after missing a few games through Defence Forces duties, and that will certainly be a major bonus for Crofton's lads.

However, having said that the performance, particularly in the opening half of Caoimghin McDonnell and that sweet left foot of his, it is difficult to see him being left off; his partnership with Con Kavanagh that day looked solid, hard working and very positive.

The Sarsfields defence has seen a lot of changes since last season's decider but overall have been holding up well.

Shea Ryan is fitting in well at full back while Conor Duffy is as solid as ever with team captain Donnchadh McDonnell a fine reader of the game, who has plenty of pace.

Conor Hartley has been doing well around the half back line; Gary White is as solid and as effective as ever; Ciarán McInerney Aspell is having a mighty season while Barry Coffey had his first start in the semi looked in fine form.

Up front is where Sarsfields will be hoping to cause most damage.

Ray Cahill needs no introduction and while he may have been quiet, by his standards, in a few earlier rounds, he was excellent against Confey.

Ben McCormack's reputation is on a steep upward spiral and he can certainly expect a call-up to the county senior panel in the next few weeks while Dan Nea is playing out of his skin at the minute. Alan Smith was very effective against Confey, finding the net and a few points while, and depending how they line out, Ronan Fitzgibbon, Seán Dempsey are all decent players.

Moorefield of course will look to Roli Sweeney once again for inspiration. The best club player in the county for some 15 years, he has been an inspiration again this season for The Moores and if Sarsfields can get to grips with him they will take a lot of stopping.

At the back Tom Kinsella is a fine stopper while Niall Galvin has grown into the no. 3 shirt. Liam Callaghan played an effective sweeping role in the semi final while Pádraig O'Flynn is an experienced defender.

Liam Healy, finally back after a bout of injuries, is a player with a big future. Assuming Ger Naughton is still out, James Murray may again be in the middle with Ryan Houlihan and possibly Anthony Durney on the wings.

Kevin Murnaghan has a big (and very effective) engine while David White on his day can be a big player.

Up front team captain Ciarán Kelly has been knocking in the goals, Eanna O'Connor has a bit of class while Adam Tyrrell has the ability to make a major impact both in defence and attack.

Jason Phillips has been a revelation this season; he has the height, the hands, can score and is more than capable of giving any full back plenty to think about.

This could all come down to who gets the match-ups right on the day.

Who will look after Ray Cahill?

Who will be given the task of curtailing Jason Philips?

Who can top Ben McCormack and Dan Nea from making those penetrating runs down the wings.

Can Ciarán Kelly find the net again on this occasion.

Can Roli's influence be curtailed and if so by whom?

Could one of the lesser lights come good on the day?

Midfield will be vital with supply to the inside men on both sides a big factor in the outcome.

A draw can't be ruled out in games such as these; form can go out the window but there is no doubt that Moorefield have been the dominant side in these clashes over the past ten years or so.

Some might say Sarsfields time has come but I'll (hesitantly) stick with The Moores.