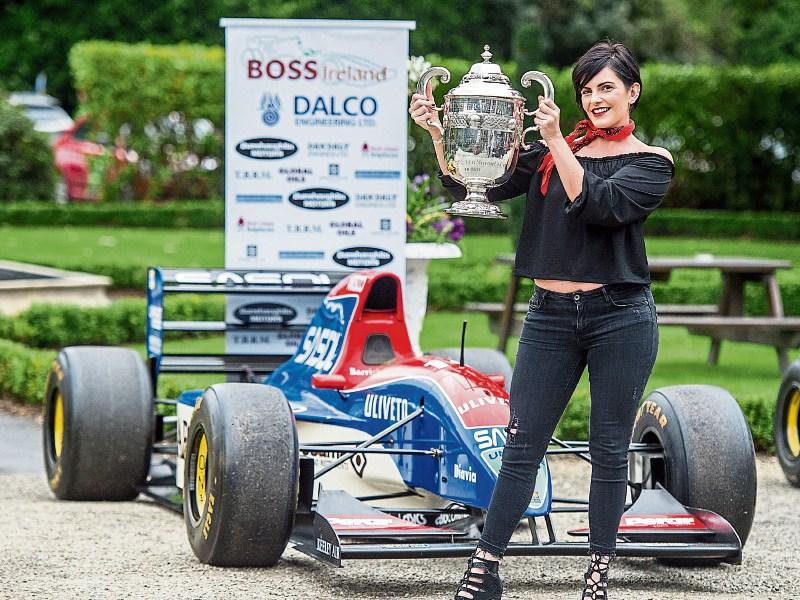 Lisa Malone (Naas) with the ex Rubens Barrichello Jordan Formula 1 car, at the launch of the 2016 Leinster Trophy race meeting at Mondello Park on September 17/18

Mondello Park will echo to the sound of Formula One power for the first time in a number of years at the Leinster Trophy races on September 17, 18.

The Leinster Motor Club's race meeting is the annual highlight of the Irish circuit racing calendar and as part of the event one of Ireland's fastest race drivers, Dan Daly, will demonstrate his beautiful Jordan 193 Formula One car.

The Jordan 193 was originally driven by Rubens Barrichello in 1993 and is now owned by Daly, a former BOSS (Big Open Single Seaters) champion who holds the fastest ever lap time around the Mondello Park International Track by an Irish driver.

The Leinster Trophy is the most famous award in Irish Motor Racing having been won by, among others, Ayrton Senna and Mika Hakkinen. This year the BOSS Ireland championship, Ireland's fastest race series, will race for the trophy for the first time and with the biggest trophy in Irish Motor Racing up for grabs a fantastic line-up of almost thirty cars is expected.

The field for the Leinster Trophy race will be made up of Formula 3000, Formula 3, and Formula Renault cars and starting amongst the favourites will be Daly's son Stephen.

Stephen Daly will drive his fathers Reynard F3000 car as he tries to write his name in to the record books as the first driver in the eighty three year history of the event to win the Leinster Trophy three times in a row.

Daly's opposition will include former trophy winners Paul Dagg, driving a Dallara Formula 3 Car, and Barry Rabbitt with his Formula Renault. Another name on the grid which is already etched into the famous Leinster Trophy is Fildes and Jonathan Fildes, son of 1972 winner Ken, will also be out to add his name to the roll of honour.

The noise and speed of the Jordan Formula One car and the BOSS Ireland race will be the highlights of two days of racing at Mondello Park which will see many of Ireland's circuit racing championships decided.

The feature events are scheduled for 3pm on Sunday with the F1 demo commencing the build up to the start of the big race.

Tickets for the Leinster Trophy races are available at reduced prices from the Mondello Park web site www.mondellopark.ie where all of the info can be found in the build up to the event.