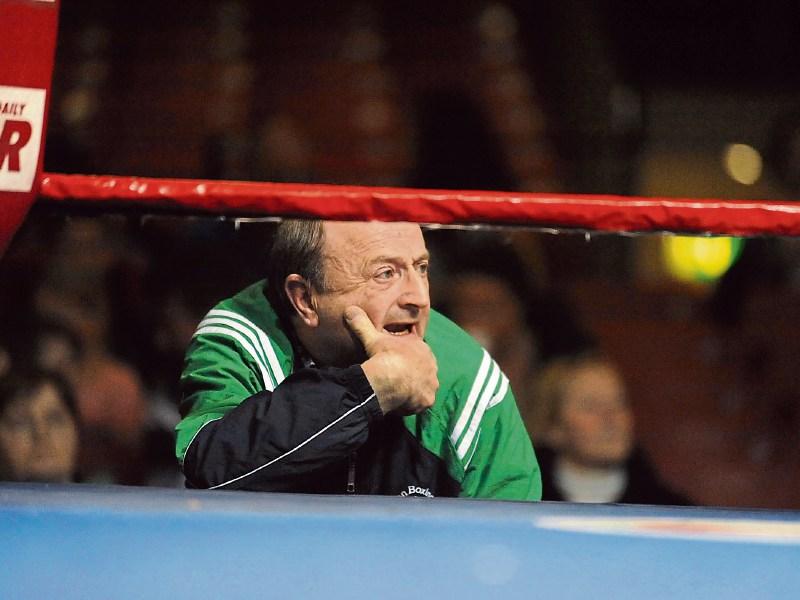 Boxing felt largely invisible in Kildare in 2005. I knew there were clubs. But I didn’t know anyone in them. So I never had cause to give the sport much thought.

Ireland qualified one boxer to the Olympics in Greece in 2004. Just one. Andy Lee.

And he was beaten in his medal fight.

Boxing’s profile was in its boots then and after the recent Olympics it feels like it’s on the ground.

Only, between that trough of 2004 and the qualifying peak of 2016, little has changed at grass roots level.

I first met Joe Orford and Dave O’Brien, the coaches of Kilcullen Boxing Club, in the autumn of 2005. I rang up and asked whether it would be okay to come down and train to keep fit.

It was, as long as I was willing to fight.

That first night in the JFK hall at the back of Bernie’s pub was all frantic endeavor, balletic foot drills and wild tear ups.

O’Brien had recently medalled at the World Fire and Police Games and it was a sight to see him work the pads with Gary McDonagh who was 48KGs of explosive talent.

So I signed up with Cormac Browne from Two Mile House.

We trained together, sparred each other and later both fought and won in Dublin’s National Stadium.

I used to go on long Saturday training runs on the Curragh wearing a heavy rucksack.

On the way back I’d often run down the slope and touch the stone at the bottom of Donnelly’s Hollow.

When the darkness of self doubt dimmed black, as it often did the day before a fight, I’d drive out to the hollow then walk down and touch the stone again hoping Dan would lift those doubts.

Most of the time it worked, along with the help of skills coached and honed by Dave and Joe every Tuesday and Thursday in the hall at JFK.

The St David’s Club in Naas used to come across and train one night a week in Kilcullen that time.

Paul Archbold was the head coach and his dedication was total. He had this way of breaking down a punch into a series of muscle twitches.

Remi Martin had an easy personality, an all action style and finished out the season with a Leinster title at welterweight.

We all boxed on the same card in Dublin that night and I remember being struck by the joy the St David’s coaches took from his victory.

Because Remi wasn’t from Naas. And he was set to return home?

I felt disappointed they were going to lose his talent after all their efforts, not realising their joy was rooted in helping someone to learn something, do something, achieve something.

I didn’t fully appreciate that the legacy of victory belonged to the boxer not the club.

There were no conditions. No kickbacks. It was pure.

Around this time Athy were making a spectacular assent on the amateur boxing scene locally and nationally led by names like Eric Donovan, Roy Sheehan, Francis Foley, David, John Joe and Davy Oliver Joyce. I was ringside at the National Stadium when many from that list swept to senior All Ireland success in 2007.

By then I knew the name of every promising amateur in Kildare from Alan Phelan in Ryston to Ross Hickey in Grangecon. Kildare’s Denis Hogan, now listed among the world’s top 10 at super welterweight, used to come down and train.

In a very short space of time this sport had become something very important and there was little time for anything else.

I’d never tire of hearing how Colm McCoy went from Kilcullen to the Olympics in Rome in 1960. Only now it feels more impressive that some of the people telling me were within a generation of that Olympiad and they’re still coaching now.

That’s worth shouting about.

When I went to London in 2008, I joined the Fitzroy Lodge Club at the back of Lambeth in Waterloo. Mick Carney was the coach. He was old as tea and typically dedicated. I recognised him straight away as another Joe Orford. And like Joe might do, Mick overmatched me with a heavyweight on one occasion. When I’d get back to Kilcullen I’d share such stories but the coaches were busy making of new ones, forged quietly, patiently and with the minimum of fuss.

Behind the headlines and the non-headlines that application has always been the greatest triumph of amateur boxing in Kildare. And while it feels like a bit of a cliche to say so, I’ve never really heard it said about these coaches and these clubs, and this sport. Especially post the latest Olympics.

The difference is the same coaches wouldn’t expect to hear plaudits.

They were always happy to leave their boxers do the talking.

Robert Mulhern is a London-based journalist contracted to RTÉ's Doc On One programme. Read his 'Letter from London' column each week in the Leinster Leader.