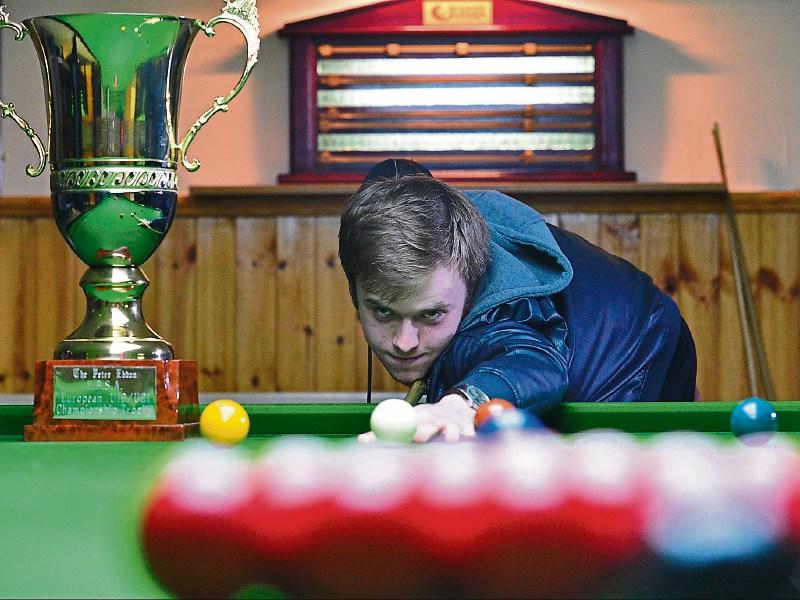 Sallins man, Josh Boileau (21) achieved his dream of becoming a professional snooker player, earlier this year, by winning the European Under 21 Championship in Poland.

This allows Josh, a member of Newbridge CYMS, play for two years on the pro tour 2016-2018 seasons, with the results from those two years determining if Josh remains on tour as a professional player.

Young professionals do not receive any funding for what can be an expensive time when attempting to establish themselves, especially in the initial years.

Josh's next event is the Paul Hunter Classic in Furth , Germany from August 26-28. Further events in the year will take place in England, Ireland, Scotland, Wales, China and Gibraltar.

There are, in all, fifteen events on the tour calendar with an average cost of €750 per event for fees and travel costs.

Income for young professionals attempting to make their name comes from winning matches on tour, which can be an added pressure when competing against the very best snooker players in the he world.

In all there are 128 professionals on the world-wide tour, which Josh is now one and he is determined to ensure he remains one when the initial two year exemption expires.

Not surprisingly sponsorship continues to play a major role in this regard and the Sallins man is hoping to attract new sponsors to his cause.

If there are any businesses or indeed individuals who would be interested in coming on board to help Josh he can be contacted on 085-7714478 or e-mail joshb147@icloud.com

No contribution is too little and any amount would be greatly appreciated by one of Ireland's most talented players as he bids to establish himself in the world of snooker.