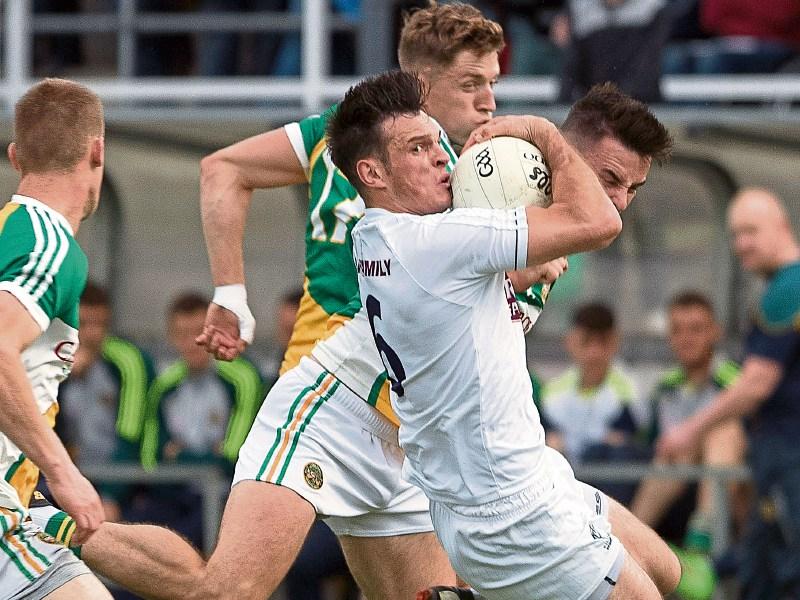 Kildare captain, Eoin Doyle, keeps a grim grip of the ball in the All Ireland Qualifier against Offaly

He may have seen back in the 52nd minute of Saturday’s All Ireland Football Qualifier against Offaly, but Kildare team captain, Eoin Doyle, certainly did not let dampen his spirits as he exited the field after the final whistle.

The Naas man had a smile as wide as St Conleth’s Park as he was heading to his team’s dressing room.

“I am absolutely delighted and very relieved I can tell you that; we started very well, led at half time; and again started the second half ok but then they got the penalty and the goal and it was then that you think of the Westmeath game in which we went into ourselves and allowed them to attack but the one thing that stood out to me when I was off the pitch was the amount of leaders we had on the field today and the drive we showed today; we did not have those against Westmeath, for some reason, but we had a good long chat with ourselves over the past two weeks and we needed that performance today and thankfully we got it.

The centre half back emphasised that “we have been training exceptionally hard and why we lacked that drive and leadership against Westmeath I just can’t explain but we certainly showed today what we are capable of; our backs were to the wall today when Offaly came back at us but this time we simply pushed on and pushed on well.”

On his black card, Doye said: “I won’t say what I said to the linesman … look me a black card for going in when Cathal McNally was on the ground, but look I have no problem why he gave me a black card but what I don’t understand is why the Offaly man did not get a black also, he did exactly the same as I did, the two of us just ‘talking’ to each other, well a little bit more than talking I suppose but I just don’t understand why I got the black and he didn’t, but sure those things happen …”

Looking forward to the next round the Kildare captain said he had just heard who would be in the draw along with Kildare, Cork, Mayo and Longford but said “look we get who we get, last year we got Cork and won that but nothing we can do about that but we will be giving it everything no matter who we draw.”