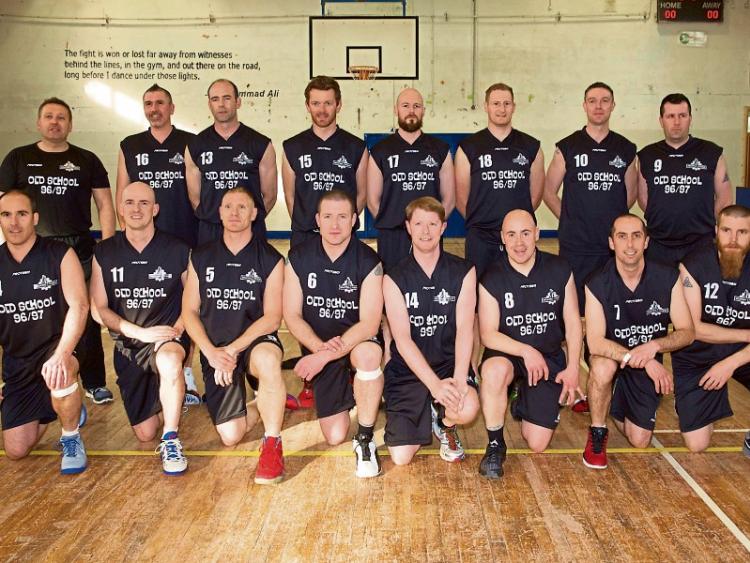 The older team may have swung it in the end, but the battle of the Newbridge PBS young guns versus the former greats of 96/97 turned out to be an enthralling game.

Organised by 96/97 team member, Morgan O’Sullivan, the event, held last Friday May 6, raised approximately €3,500 towards the refurbishment of the Patrician school gym.

“It was fantastic, absolutely terrific. The lads’ kids got to see them play and they were blown away by it. I hope the young lads enjoyed it as much as we did. It was great to see that basketball is as strong as it used to be in the school when we were playing,” said Morgan.

He was full of praise for the current batch of players and wished them well for the future.

The team of 1996 lost the All Ireland final, but in '97 they put the disappointment behind them to claim the All Ireland Schools Cup, and finish runners up in the All Ireland League final, Dublin League and Championship. They reached the final of every competition they contested.

Coached by Joe O’Connor, the present basketballers are also enjoying success, losing out by a heartbreaking point in the U19 A All Ireland Final against Colaiste Choilim, Ballincollig in February.

A large crowd, rivalling any top league basketball match attendance, turned out at the school to cheer on both teams.

“It was genuinely a really really good match,” said Morgan, who pointed out the older team hadn’t lost any of its competitive edge.

His former '96/97 teammate, comedian Jarlath Regan was keeping up to date through What’s App and social media.

“He really wanted to come home but he couldn’t make it. He was raging. We had another lad, Brian Connaughton, who was in Australia. His parents came down and videoed it for him,” added Morgan.

Unfortunately, there was one downside to the game when veteran player Jamie Murphy tore his Achilles tendon and he is due to have surgery this week. His teammates rallied around him and wished him a speedy recovery.

Morgan thanked everyone who supported the event and all the local businesses who came on board as sponsors and gave donations for the raffle.

A special match programme was produced for the occasion.

Former Kildare footballer, Dermot Earley also got some court time, while Kildare boss, Cian O’Neill took up residence court side to guide the team instead of his usual spot on the pitch sideline. Broadcaster and radio DJ, Keith Walsh was compere for the event.