Tea, tranquility and a slow pace with Athy Boat Tours 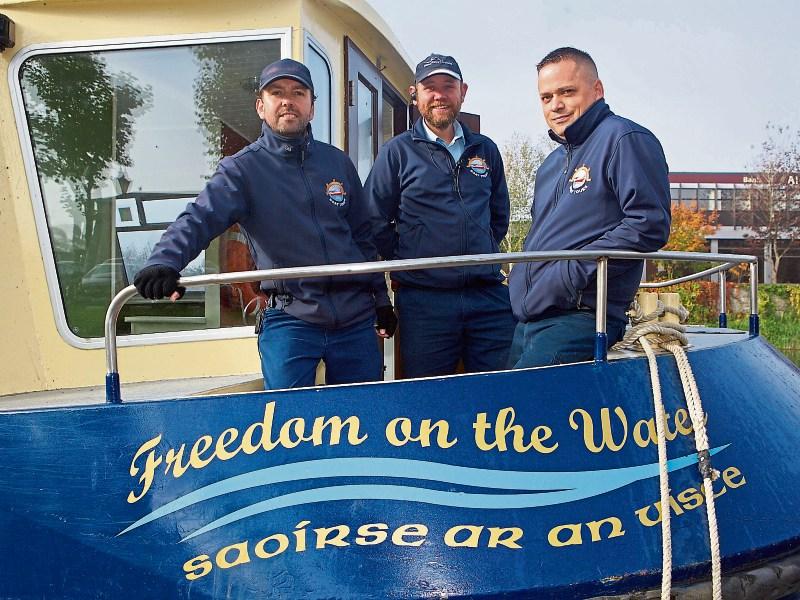 Time goes by at a leisurely pace on board Athy Boat Tour’s The Freedom of the Water.

And it is amazing what you can learn along the way.

Like the fact that Leonardo da Vinci’s original canal system design is still in use all along canals today and that herons, king fishers, water hens, buzzards, sparrow hawks, peregrine falcons and otters are all embedded in the local wild life.

The sustainable and community focused Athy Boat Tours has only been in operation since July but already it has won two awards. It is now applying for the local media Get Involved awards, to promote local, sustainable businesses that give back to the local community.

The Barge Project is a community based project with all profits going back into the community. It has attracted school tours, book clubs, hen tours, scary tours, Christmas parties, afternoon tea tours and even the odd 80th birthday party.

Aptly named ‘Saoirse ar an Uisce’ or Freedom on the Water the purpose built boat, which has full disabled access, was built by HPC in Newbridge in 1998.

“You are forced to live at this pace because you can only go as fast as the boat,” said skipper Chris McKenna who is one of three skippers for the boat that is licensed to take 12 people on board at any one time.

“You could be in a different world here. We were coming down here twice last week and there were three donkeys standing out looking at us as we passed by.”

The Leinster Leader was treated to a morning trip last Thursday. Our route took us to Malone Weir from the docking station in Athy. We passed through Ardleigh and Lord’s Island along the River Barrow canal. As we float past we meet people out walking their dogs, an elderly couple out for a cycle and we catch a glimpse of the hanging tree equipped with a swing rope that is host to swarms of children on warm summer days.

“Dragon flies are in abundant on the water,” said Chris.

“Electric green dragon flies are a hit with the kids as well as the swarms of fish, butterflies using the boat as a hop on hop off service during the summer, feeding the swans and their signets and even the foxes can be seen skulking in the overgrowth. From a wild life perspective this tour is worth it alone.

“We give the kids an information sheet that they have to fill out as part of their nature trail while onboard. We would also get the kids to listen blind to the calls to see if they can identify the different birds.

An elderly group from the nearby St Vincent’s Hospital came on board recently.

“They all brought a bottle of Guinness each and had a sing song. One of the ladies who was due to turn 80 afterward was asked by her family what would she like to do for the day and she said she wanted to go back on the boat, and eat hot chicken and sausages, so the family came with her and she was thrilled.”

A book club recently opted for the five-hour tour and held a reading on the boat and for lovers of history each Sunday there is an archeologist on board who gives a talk about the history of the canal including the former mill and the former castle at Ardleigh. which was once an important seat of the Fitzgerald family.

The boat is fully heated for winter outings and while food cannot be cooked on board the crew can reheat food if requested. All the skippers have gone through rigorous training including a survival skills course, man overboard training, first aid and crowd control.

“It is glorious out here - even on a rainy day it is very calming to sit inside with the doors open and look out on the rain. It is very peaceful and for us it is a dream job. It is not like work at all.”

“It began with the recruitment of crew. Athy Boat Tours have three crew, supplied by CE Scheme, and we have some volunteers. The really fun part of the project has being the development of touring routes. In Athy we are very lucky to have both the Grand Canal and River Barrow. The River Barrow is where Freedom on the Water is currently touring, but the River Barrow and the Grand Canal for year round tours.”