The Bridges of Kildare County

Their legacy and importance 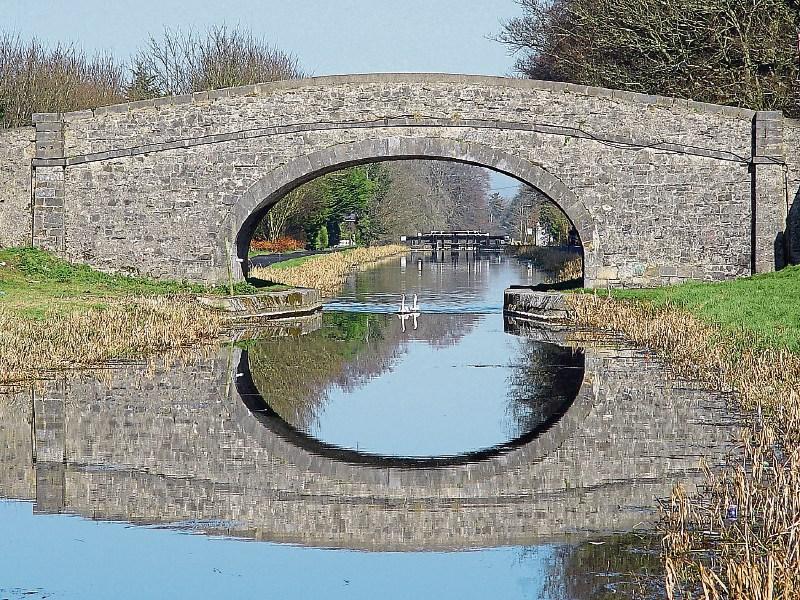 One of the many 200 year old bridges over the Grand Canal, in this case near Naas.

You drive over them every day without even noticing or considering their legacy.

They are absolutely vital to the economic well being of the county and its inhabitants, and yet they are entirely taken for granted, until one of them fails.

Kildare has two of Ireland’s major rivers (Liffey and Barrow), both of its canal systems, three major motorways and two rail lines running through it. Occasionally two or more of these can be side by side, or in close proximity, especially in the urban areas they were built to serve.

All of these are barriers cannot be intersected. You must either go over or under them, and they leave the county looking like a badly sliced up pizza, challenging town planners, developers and road builders alike.

Without our bridges, Kildare doesn’t work.

Back in August of last year a wall on what is known as the oldest bridge over the Liffey was damaged, leaving the village of Caragh cut off from Naas and the motorway, both of which were only five minutes away.

If you don’t think that bridges matter, then consider the effect it has had on Caragh, one of many urban centres in the county which exist precisely because of their proximity to an important bridge.

Businesses in the village are wondering about their ability to survive without passing traffic.

On the flip side, parents say it is a safer place for their children. Some children are now walking to school, where before they were never permitted to do so.

A friend who lives there tells me that with the road being less of a rat run and more like a local cul de sac, the atmosphere in the village has changed with people walking more, using their cars less and generally being more relaxed and less stressed.

Not only was the bridge useful, it also defined the nature of the place. Caragh used to be a place you go through on to the way to somewhere, and now it’s somewhere you go around unless you want to specifically visit the place.

Newbridge, for instance, is effectively a peninsula, and defined by that. Unless you enter the town from the Curragh on the western end, you must cross either the railway on the northern side, the Liffey to the east or the M7 motorway to the south.

A shortage of bridges over the river and to a lesser extent the motorway and railway have conspired to keep traffic unnaturally clogged in the town.

“Newbridge is particularly significant because it is a name that can be dated to the construction of a bridge in a relatively modern time - there was a wooden bridge (over the Liffey) built there in the late 17th century and a stone one in the late 18th century,” said the Leinster Leader’s historian Liam Kenny.

“It’s a direct co-relation between bridge and placename; there would be no Newbridge had not one or the other of those bridges been built.”

Monasterevin isn’t much different, with the railway, the Barrow, the canal and the motorway all conspiring to squeeze the town into a small corner.

While a broken bridge might cause inconvenience in some places, if anything happened to the canal bridge in the village of Ticknevin near Derrinturn, the entire community would be cut off, forced to choose between a barely passable dirt track on their side of the canal bank, or striking out on foot across farm and bog land to Lullymore.

The bridge in Caragh was built in the 1600’s, although obviously works has been carried out on it since then.

Last Friday, at a municipal district meeting, former TD and county councillor Sean Power asked council staff who had responsibility for the integrity of the structures and how often surveys are carried out to determine same.

Waterways Ireland looks after canal bridges, Irish Rail looks after the railway ones and the river, road and motorway bridges are taken care of by a mixture of the council and the National Roads Authority.

The canal bridges were all built, along with the rest of the canal, across the mid to late 1700’s, for horses and carts, and as is the case in Ardclough, only just about wide enough for a cart.

“I used always marvel too at the idea of a canal bridge built at the time when the heaviest traffic was a horse drawn cart load of hay being now able, two centuries later, to withstand gigantic loads such as a ready-mix concrete truck,” said Liam Kenny.

That said, he noted that well built arch bridges built by the Romans in parts of continental Europe in 500BC are still intact.

“Also, not to get too technical but it is probably fair to say that the multi-wheeled pneumatic tire vehicle probably distributes the weight better across the structure than the narrow iron rimmed wheels of a cart, but their longevity is still bloody impressive.”

In a discussion I had once with a senior council official, he admitted that should all the canal bridges reach their sell by date in the coming decade and start to fall, the cost of replacing them would easily exceed a billion euro.

It was a vista, he admitted, he’d prefer not to think about.

Not only are they a lasting legacy, those bridges are a vital one