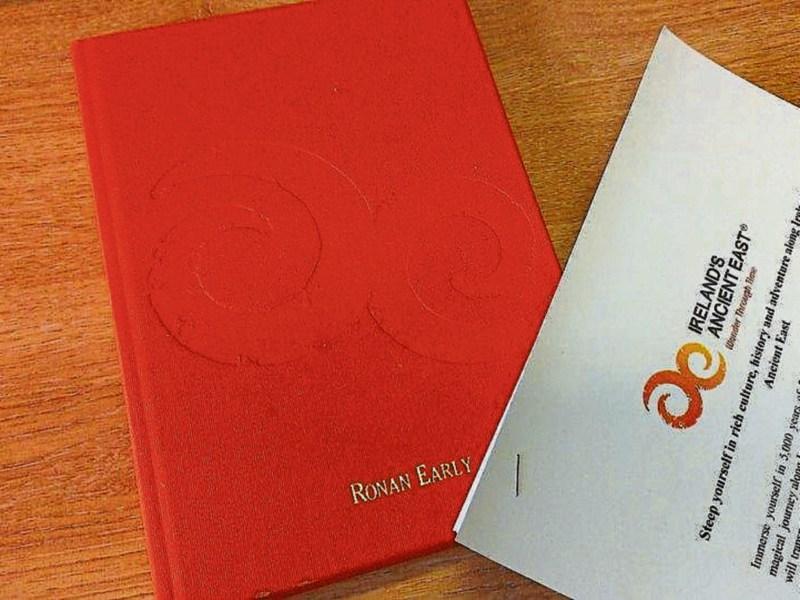 The personalised diary received by our columnist

A book arrived in the post the other day. That’s not an unusual event. Publishers often send stuff to newspapers in the hope of getting a review.

This one was different though, it had my name etched in gold lettering on the front - makes it look as if I wrote the thing. I didn’t, but I can. Turns out it has mainly blank pages and is from the people behind Ireland’s Ancient East. The idea is that I visit some of the sites and record the experience for myself in this smart little notebook.

I may do so. There are lots of interesting places to visit, but the one I would find most fascinating does not exist.

Do you remember being in primary school? For most of us that read and write in newspapers that was a while ago now. But I can remember the terrible boredom of it too well. At least you got to develop and expert knowledge of the view from the window. Except when the blinds went down and the projector lit a path of dust all the way to lots of slides as Gaelige. On a dull day, during a tedious Monday-to-Friday slog, that was the low point. It wasn’t all grimness and monotony though. There were fun times - big break and small break - and the odd bit of messing in class that lightened the mood. Sometimes the teachers would even do their bit for morale.

My third class teacher was awful; strict and unfair. But nobody is all bad. As a balance to all of the banality, she would sometimes break out an old hardback tome. In it was, literally, the stuff of legend.

The usually distracted class was spellbound at her reading about Cú Chulainn, the Red Branch Knights, Fionn mac Cumhaill, Ferdiad, Oisín and Diarmuid and Queen Maebh and a load of others. I remember being transfixed completely by the incredible tales; these Celtic myths from other millennia seemed far more real and alive than anything in our textbooks.

Once we moved on to fourth class we never heard from Setanta or Fionn again, which is not surprising in hindsight seeing as they weren’t on the syllabus. Still, I often thought about the heroes of Gaelic lore over the years. And when a statue from of Fionn Mac Cumhaill went up on the edge of the Curragh I was impressed, and a little taken aback. It turned out the Curragh and the Hill of Allen were his stomping ground, even if he was originally from Ballyfin.

Perhaps this is all common knowledge to Kildare people, but being one of the many residents of the county who didn’t grow up here, it was a surprise to me.

The next thought I had was that Fionn was poorly represented by the tourist industry.

I think having such a strong link to a mythic heroes is one of the best things about Kildare. Had Fionn Mac Cumhaill foraged and fought in my home place I’d feel as tall as his statue.

But you hear precious little of him locally. Those who might interject at this stage to say that a) we don’t even know he was a real person and b) all of these great stories were made up or exaggerated so much that they may as well be should just repair to complete their PhD in missing the point. Even if ‘a’ and ‘b’ are true, the figures from Irish legend are a triumph of great storytelling over the passing of time; they are a towering testament to the Irish imagination and tell us more about ourselves than many a collection of facts.

They are stitched into the Irish soul and many of these yarns grew from the mid-Kildare earth.

So, what I’m getting to here, eventually, is that they should be cherished and shown off more. To do this, there should be a Fionn Mac Cumhaill Centre on or as near to the Hill of Allen as the gravel industry allows.

There should be something which delves further into the tales and makes them a vivid, immersive experience for tourists and local people too.

His deeds should be re-enacted, his trails redrawn, his weapons forged again, his legend made real.

Look at the some of the dross that is sold as tourist attractions now: Tayto Park, the Butter Museum in Cork... the National Leprechaun Museum!

We should be a lot less about the leprechauns and more about the giants.

When it comes to a proper visitor attraction there is gold in the Hill of Allen, which makes it an especially great pity that it was blasted for stone instead. Still, it’s never too late to do the right thing.

The right thing is to not just keep these epic stories alive — for such rich yarns do not ever die — but to give them new impetus and overdue prominence.