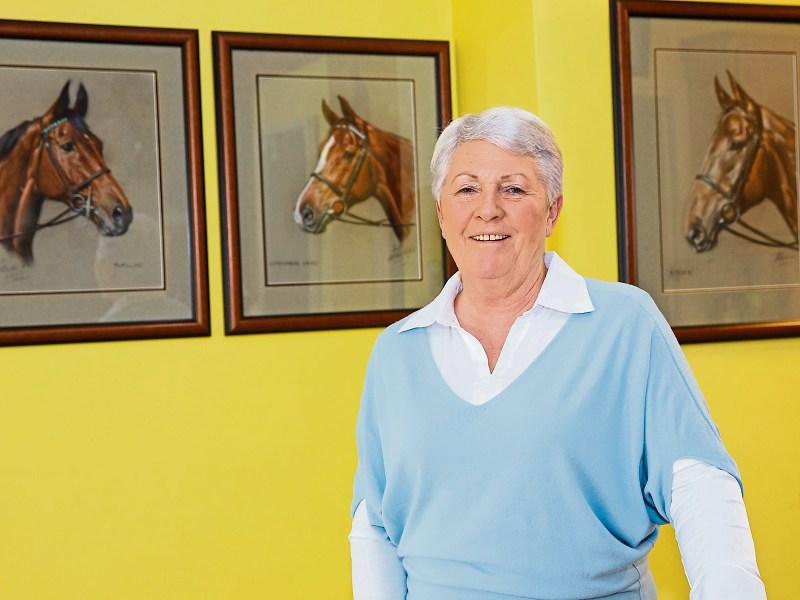 When you arrive you certainly know where you are. On the left as you drive in, a small figure of a jockey is looking out from the neatly kept garden. The colours are familiar: yellow, green sash and a red cap.

Inside The Racing Post sits on the diningroom table. Framed pictures of some magnificent horses adorn the walls.

Pride of place undoubtedly goes to the montage of the 2000 English Grand National winner Papillon; closely followed by Commanche Court and Rince Ri, amongst others.

Yes, you are right, we are close to the village of Kill in the home of one of the most famous racing families in the country, the Walshe’s.

But we are not here to chat with Ted, or Ruby or even Katie for that matter, but the lady whose colours are painted on that figure that keeps a watchful eye on the comings and goings .

Helen, nee White, was born in Skibbereen in West Cork and came to live in Naas along with her parents and siblings when her dad, then a sergeant but promoted to garda superintendent when transferred to Naas.

Helen sat her Leaving Cert at St Mary’s College, Naas; sportingwise tennis was her game as she joined Naas Lawn Tennis Club. “A really great club that does tremendous work, especially for the young people of Naas” says Helen enthusiasticall.

“There was no racing in West Cork” she says with a laugh but soon after coming to Kildare she picked up the Punchestown bug.

“We walked out to Punchestown, we lived up in Connolly Crescent at the time (now Lakeside Park) as we were on the Punchestown Road anyway.”

Two things in particular stick in Helen’s mind from those days. John Garvey winning the famous Millbrook Cup on Walking Sunday, plus the rain “it always seemed to be raining.”

Helen met her future husband, Ted Walsh, “maybe in Lawlors (ballroom) but probably in Ardenode,” one of the hot spots every weekend back then and the rest as they say is history.

These days of course Helen is heavily involved with the main family business at the stables in Kill. “Hard work but we are a small, relatively speaking, operation and while you are always going it’s great and I love it.”

Helen says she loves going racing, but can she relax and enjoy it, especially when Ruby and Katie are in action?

“Not sure how relaxed I am during any particular race but I do realise just how much it means to them (Ruby and Katie, not forgetting Ted); I don’t know if anyone actually relaxes when there is a race on but I love the buzz; the hype; for me the most important thing has always been they come back safe and that when they get down off the horse and can say they were happy with the way they rode and the decisions they made were the right ones.

“We all make decisions but when it is a big race; when you’re on the big stage nothing escapes with all the TV cameras and the social media these days“; before anyone gets down off a horse the opinions are made and are out there for everyone to see and read, regardless.”

Helen though admits she is no fan of Twitter or Facebook. “I’m not into it I have tried it on a couple of occasions to see what I was missing; but I hate it; anyway I can’t get into it; I can’t get out of it and basically I don’t what to have anything to do with it” adding “I don’t want any of the kids saying ‘oh look there’s me mother on Facebook' no not for me.”

"I love going racing especially the big days and the big occasions but with At The Races (TV) you can see why the numbers are down (attendance) but sure it’s in your sitting room now every day (which is great mind you)."

Punchestown, insists Helen, is something special, very special and it’s not all about the racing either.

“People go to Punches-town for a day out; it is a real social occasion just like Galway or Leopardstown on Stephen’s Day.”.

Punchestown is the end of the National Hunt season, Helen reminds us; “it kinda wraps it all up; the grand
finale but there is fabulous racing; they have improved it so much and the prize money is incredible,” she says enthusiastically.

Helen admits that work at home is a seven day a week job; "we don’t have huge staff or anything like that but it is very difficult to get staff, everybody is crying out for staff but you just can’t get them.

“I am not sure why but I think for instance bodies such as RACE, they run on a Monday to Friday basis but racing doesn’t run on a Monday to Friday basis; so young people are trained to work from Monday to Friday, not Saturday or Sunday or Bank Holidays and then they come out into the world and are used to working just five days; I am not blaming RACE for it (what they do they do very well) but if you for instance are covering a GAA match and it is on on a Sunday, you can’t say sorry I can’t cover it that it’s on Sunday.”

Speaking of Sundays, says Helen: "you know Sunday racing killed it for us. When the kids were small I used to love Sundays; you’d do your bit and come back later in the afternoon but you would have a few hours then to go somewhere together or just relax but once Sunday racing came, Sunday dinner was gone but the people who brought in Sunday racing don’t go racing on a Sunday; they don’t appear on a Sunday” insists Helen.

“In England that is not the case; the main racing is on Saturday. Religion is probably the wrong word but the English respect their Sunday much more than we do.”

Will I go to Punchestown everyday?

“I will yes, the great thing about Punchestown is I don’t have to think what I am going to wear, it’s down there hanging in the wardrobe whether the sun is shining or the rain is falling; you can decide.”

Racing is a kind of a bug says Helen “and it changes from one time of the year to the next; Punchestown is over; the season is ended; the horses are put out to grass; time for painting and maintenance; time to tidy up and before you know it they (horses) are back in and we start all over again.

“In one way we go from one dream to the next; sure that’s what it is, it’s all a dream.”