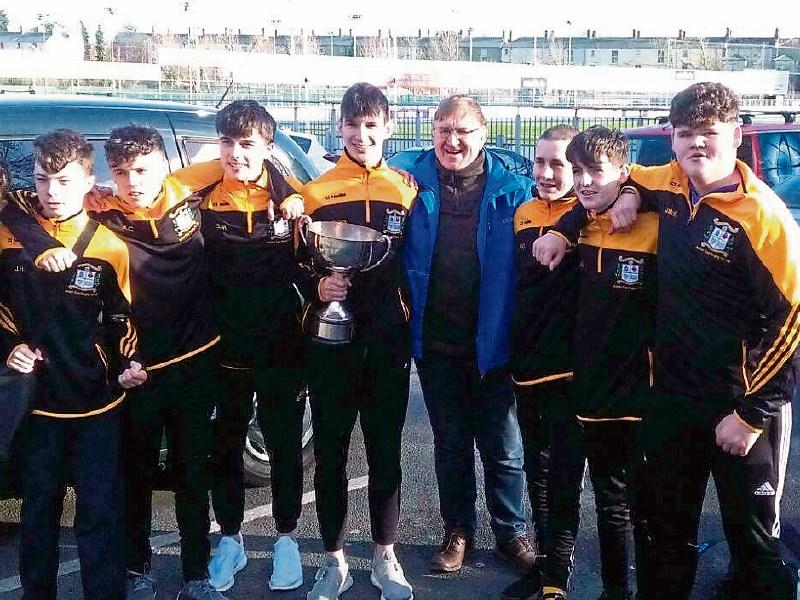 Patricians players with the Rossiter Cup

Patrician, Newbridge,  overturned a nineteen-point half time deficit to claim a thrilling victory over Ballymakenny College, Drogheda in the Rossiter Cup Final in Donnybrook this afternoon (Thursday January 25).

Conor Martin was the star of the show for the Newbridge school with his two tries and overall excellent play proving crucial.

Patrician were the first to register on the scoreboard when in the 2nd minute  when both Aidan O’Brien and Dylan O’Keefe gained ground in the Ballymakenny half and that left space out wide which centre Conor Martin took advantage of as he strolled under the posts to score. O’Keefe converted the try to go ahead 7-0.

From there on though Ballymakenny took control running in four tries in ten minutes to lead  26-7.

Patricians had a mountain like lead to overcome but they made an incredible attempt at doing it as they raced out of the blocks for the second period.

It only took them five minutes to crash over the Ballymakenny line when after huge pressure saw Senan Brannock score in the corner.

Ballymakenny’s lead was ate into even further in the 39th minute as Martin again did good work before back row Ronan Cooney got his hands on the ball and he used his strength to power over the line for a try which Dylan O’Keefe converted to leave Patricians only 26-19 behind.

Patrician were all over their opponents at this stage and they soon had their third try of the half with Aodan Dempsey getting over in the corner.

The Kildare school then went into the lead in the 48th minute as prop forward James Choiseul crashed over with a Senan Brannock conversion giving them a 31-26 advantage.

There was still to be late drama however as Dylan Lynch scored late on but a missed conversion meant the teams were tied at 31 points apiece.

Patricians weren’t to be denied though with their best player Conor Martin showing all his skill as he scored another try with the last play of the game to give Patricians a narrow victory.