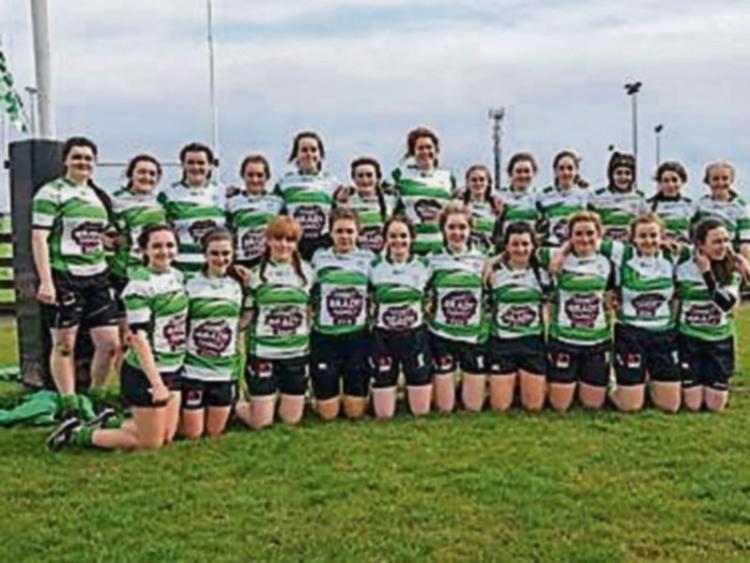 Cup winning Naas RFC's U15 side

Naas Under 15 girls came into the Leinster Cup final as slight favourites over their rivals Mullingar, having beaten the Mini Heifers twice in the league stages. However, both those victories were very close, with a single score separating the two sides on each occasion.

Both teams took to the field in Ashbourne with full squads on a perfect day for rugby but it was the Kildare team that started slightly more confidently and Katie Maguire ran in the first score after only 7 minutes.

Mullingar struck back after 15 minutes with a perfectly executed blind side move which created a two on one against the Naas winger. Laoise Lenehan then tore the Mullingar defence apart to score a great individual try,  converted by Victoria Chanders. Naas overcame the loss of captain Molly Mckeown, who left the field injured, and their third try was scored by Sophie Lyons. Mullingar quickly scored a long-range penalty to make the half time score 17 8 to Naas.

And so it remained through a second half, disrupted by two yellow cards for Mullingar. Naas were unable to capitalise barely missing a tackle for the rest of the game.

With 15 minutes to go, the Mullingar centre managed to break through, and seemed certain to score, until Katie Maguire caught her on the Naas 22. The Naas players reacted more quickly and Erin King, who generally believes kicking is just for soccer players, hammered the ball 50 yards downfield.

The chase was good, and Naas kept Mullingar pinned in their own half. The stress levels on the large travelling support from both teams rose as play was stopped for 10 minutes, to deal with an injury to Naas winger Sophie Lyons.

Naas reacted better to the delay and kept their concentration, to keep making tackles as the brave Mullingar girls fought to come back.

A turnover by the magnificent player of the season, Rachel Murtagh, released an outstanding back move which resulted in Amy Switzer coming within inches of scoring. Unfortunately she was injured in the process, and the ref decided to call time on a fantastic game.

The heartbreak for the outstanding Mullingar girls was clear to see, as was the spirit of sportsmanship from both sides. The injured McKeown then recovered sufficiently to lift the trophy on behalf of her teammates.