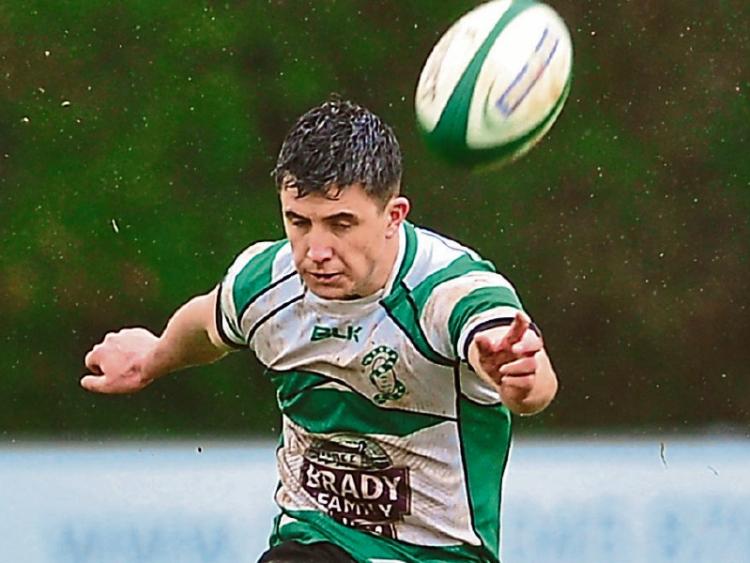 On the mark, Peter Osborne of Naas

Naas continued their push for promotion from Division 1B of the Ulster Bank All-Ireland League with an away trip to Cork last Saturday to face UCC on Saturday.

The game was played on a beautiful Spring afternoon and Naas started brightly, taking the lead after 12 minutes Peter Osborne converting a penalty taking him to 100 points in the league to date.

UCC scored a converted try but Naas hit back before the break with another Osborne penalty to leave the half the score reading UCC 8 Naas 6.

With 19 minutes remaining the home side increased their advantage. Naas attempted to run a ball from their own line, but turned over possession and with a huge overlap U.C.C. quickly moved it out wide to Daire Feeney who scored. Although O'Keeffe missed the conversion Naas now trailed by 13-6. To be honest they looked a beaten side at this stage as not only were they seven points behind, but they had lost Michael Skelton, Will O'Brien and replacement Johnny Delaney to injury.

However there is great heart in the side and they were not going to lose without a fight.

With 13 minutes to go Paulie Tolofua received a ball inside the U.C.C. half there seemed little danger for the home side. However he took off, brushed away numerous tackles and made 40 yards for Naas. When he was eventually stopped the ball was quickly moved to Peter Osborne who sprinted down the line to score in the corner. The conversion was extremely difficult but Osborne struck it beautifully to level the scores.

The last say however was to go to UCC With six minutes remaining Naas were penalised for hands in a ruck and Kevin O'Keeffe was successful with his penalty attempt, that gave them the lead and ultimately victory on a 16-13 scoreline.

So defeat was to be Naas' lot but it was not all doom and gloom. Within minutes the scores of the other games in the league filtered through, and it transpired that the losing bonus point gained was enough to move Naas into second in the table. The push for promotion is still on.