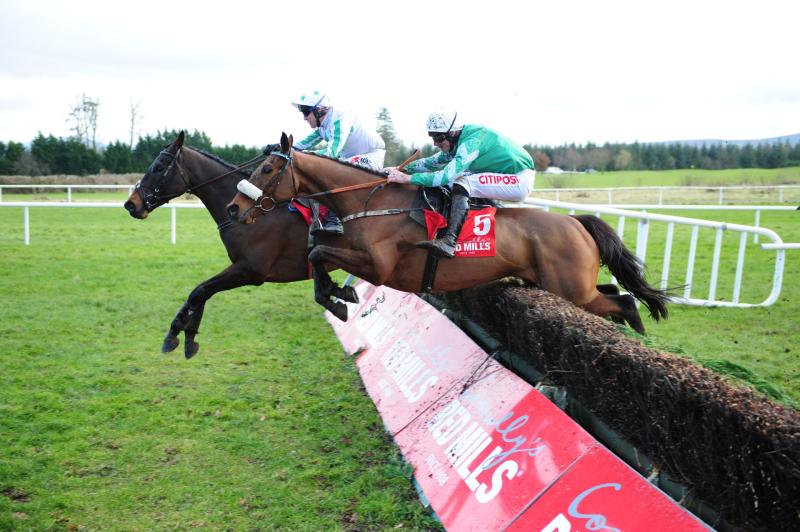 13:30 - SIR ERIC (11/10) should get favourite backers off to a winning start on Friday in the Triumph Hurdle. He was a high-level performer on the flat for Aidan O'Brien before heading to the hurdle ranks off his son Joseph. Joseph has already been in the winner's enclosure this week with Band of Outlaws but this one would raise the roof. Perhaps the best-backed horse off the day, he will take all the stopping, even with English hope Quel Destin chasing a sixth win in a row. Sir Eric was pushed all the way on his hurdles debut when seeing off Tiger Tap Tap by a neck at Leopardstown over Christmas but he had eight lengths to spare when they met once more in February. Sir Eric showed a thundering turn of foot to pull away that day, seeing off Gardens of Babylon by six lengths. He's the one to be on for the win with Tiger Tap Tap to lead the chasing pack behind him.

14:10 - MR ADJUDICATOR (14/1) is a brilliant each-way option in this competitive renewal of the County Hurdle. He has been first or second in each of his last six starts, including when a game runner-up to Farclas in last year's Triumph Hurdle. His most recent runner-up effort was against Espoir D'Allen, a horse that won Tuesday's champion hurdle by 15 lengths. Even though Mr Adjudicator was 11 lengths back on that occasion, that's still the best form in my book and at the prices, each-way backers may be well rewarded.

14:50 - COMMANDER OF FLEET (6/1) is the one I'm backing here. This horse is the apple of Gordon Elliott's eye and as an imposing horse, he will be suited by the step up in trip and should show the guts associated with the convoy from Elliott's yard. He won his first start for the Meath handler last April and confirmed the hyper around him when getting his head in front again at Punchestown and Leopardstown most recently. He ran a stinker at Fairyhouse between those victories but will be seen to best effect back on a softer surface. That run is perhaps reflected in his price as it would be a lot shorter had he won or placed that day. I'm happy to put a line through that run, especially following his Grade 1 success at Leopardstown recently where he showed plenty of heart to see off the challenge off Rhinestone.

15:30 - Cheltenham Gold Cup - PRESENTING PERCY (7/2) is most talked about horse on either side of the Irish Sea this year, despite only running once in a pipe-opener over hurdles at Gowran in January. The lack of a run over fences this season is a worry for some, but by all accounts, Presenting Percy has been working out of his skin at home. We're depending on last year's form, especially his win in the RSA Chase, a performance described by many as an absolute showstopper. The Gold Cup was on the lips of everyone immediately after that race and it's been on the radar all year for the imposing eight-year-old. He won that RSA by seven lengths but, if pushed, probably could have gone on by more. Connections have been waiting for soft ground throughout the unusually dry winter period and with a number of false dawns in entries and withdrawals, tongues have been wagging for his return. Finally, after a week of rain at Cheltenham, that ground has arrived for Friday's centrepiece. Reigning champion Native River, tipped by this column last year, is back and will be a stubborn incumbent to dislodge, but as I said about Presenting Percy last year, the hype is real. One at a massive price that could outrun those odds is SHATTERED LOVE (28/1), an impressive winner of the JLT at the 2018 Cheltenham Festival.

16:10 - I backed him last year and I'm on him again this time around - PACHA DU POLDER (16/1) has won the last two runnings of this race and but for an overly patient ride, could have done likewise in 2016. He is a specialist in the Hunters' Chase game and although he was a mile behind Road To Rome last time out, that rival has a few too many miles on the clock for me this season to win a race like this. The biggest threat is Enda Bolger who saddles Stand Up And Fight (4/1) who will be popular with Irish punters, especially Munster Rugby supporters. The price has gone on him in my opinion and a course and race specialist like Pacha Du Polder at a lovely each-way price makes far more appeal. He'll stay all day and I have no doubt Paul Nicholls will have him primed once more.

16:50 - This isn't a race I'd be investing heavily in but MIND'S EYE (12/1) is one that makes a bit of appeal. He probably doesn't win enough for the level of talent he has but he is unexposed in this sphere and is in the hands of the in-form pairing of Henry de Bromhead and Rachael Blackmore. He has form behind a lot of good horses, including Le Richebourg, finishing 12 lengths behind Joseph O'Brien's injured star at Leopardstown. He's also bumped into Voix Du Reve over fences, a rival that was shaping well before falling in Thursday's JLT. Mind's Eye has also won on soft ground over fences, which is a major plus. He beat the likes of Us And Them on that occasion in Wexford and that rival franked the form massively when finishing runner-up to Duc Des Genievres in Tuesday's Arkle.

17:30 - DALLAS DES PICTONS (7/2) will be backed off the boards in this the last race of the meeting and it's not hard to see why. The Gordon Elliott-trained runner has won twice since the turn of the year but his best piece of work came in defeat when he chased home City Island. He was just three lengths behind that day with that form getting a serious franking on Wednesday when City Island stormed through to claim the Ballymore ahead of the much-fancied Champ and Battleoverdoyen. He carried level weights that day, showing the handicapper has failed to get a hold of him. A lot can happen in the final race at Cheltenham but I'd be surprised if this one is out of the front three. Here's hoping he ends our festival with a winner.