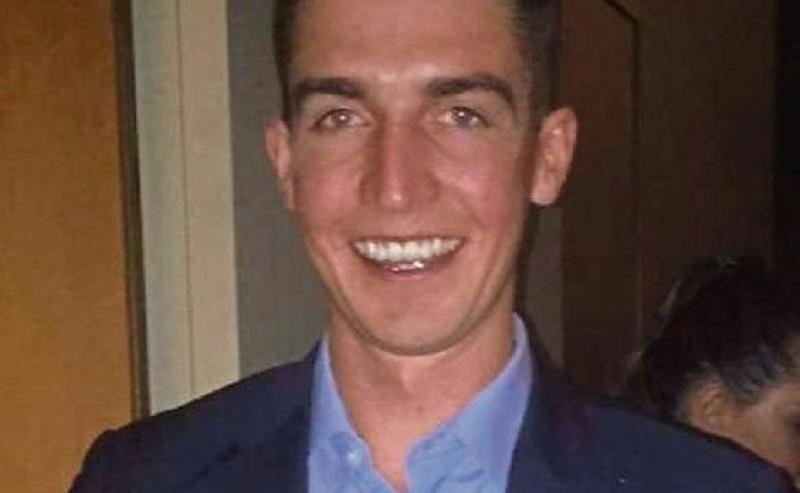 Mark Power with the Melbourne Cup

That, however, is where Mark Power found himself last November when a piece of racing history was made when up-and-coming trainer, Joseph O'Brien trained the winner of the Melbourne Cup with his 4-year-old colt, Rekindling.

It was a remarkable achievement by the young trainer and with his dad's (Aidan) runner Johannes Veneer second and Willie Mullins' Max Dynamite third, it made the occasion even something more special from an Irish point of view.

Rekindling arrived in Melbourne some five weeks prior to the race and was immediately put into quarantine, along with all the other European horses that had made the trip. But even before the trip was undertaken Rekindling had to endure two weeks quarantine at home.

All these preparations came under the watchful eye of Joseph O'Brien's right hand man Caragh native Mark Power, Assistant trainer to O'Brien at the famous Owning Hill establishment in Kilkenny.

Mark is son of former TD and government minister Sean Power; he comes from a family of four, brothers Rob and Shane and sister Lisa; his mam Deirdre, nee Malone, hails from another native and well known Caragh family.

Mark told the Leader that while there was always a strong interest in racing in his family, his dad was a bookie before he went into politics, they did not have any horses.

“I had a keen interest in racing from a young age and I got a summer job, and weekend work for near neighbour and trainer Arthur Moore.

“After finishing my Leaving Cert; I joined Jessica Harrington as an apprentice flat jockey;  I then went to Kevin Ryan in England but soon decided I was not going to make it as a jockey so I took a different road, coming home I went to study Equine Business in Maynooth, four years there; did a couple of stints in America; came back and did a National Stud course in Kildare; and a couple of summers in Gay O'Callaghan's Yeomanstown Stud.

“It was Gay's son, Peter, who got me into Joseph's (O'Brien); Peter owns Woods Edge Farm in Kentucky now; I worked for him for a summer on a J1 and he  previously worked for Aidan (O'Brien) in Ballydoyle, so that was the connection.”

Mark then, as he says himself, went to the Hill (Owning Hill), original home place  of Joseph's grandfather Joe Crowley. “I was there from the time Joseph started” (which was before he got his full training licence).

Joseph has gone from strength to strength, says Mark, having the Triumph Hurlde winner in Ivanovich Gorbatov in 2016, trained under the name of Aidan

“He (Joseph) ticked a lot of boxes that would attract owners, different types of owners; with  Ivanovich Gorbatov winning The Triumph; then he had a Group 1 2-year-old winner; won the Moyglare; won the Galway Hurdle in 2017 and then in November I went out to Melbourne with Rekindling.”

That must have been some experience, not to mention responsibility?

“It was absolutely brilliant and while I had a lot of responsibility placed on my shoulders I looked at it as a prigilege and an honour.”

So what was involved in that entire trip and how long were you in Melbourne for?

“I did two weeks quarantine here in Ireland and out there for five weeks.”

And what do you mean when you say you were in quarantine, firstly in Ireland?

“What that means is that the horse was stabled here in Ireland, couldn't leave those premises and there was no one else allowed to come near the place; everything was cornered off from the road; new railings;  for instance a woman walking her dog was not allowed to come within 100m.

“When I was going in, I would have to have a shower; new gear, everything, the Aussies are  absolute sticklers for it; they are really big on the quarantine if an animal is coming into the country; so I did the two weeks at home; then five weeks in Melbourne.”

So after the two weeks, Mark and two riders (MJ Doran and Skippy Maynard) headed for Melbourne with Rekindling along with US Army Ranger.

“We went from Shannon to Farmborough in England; boxed down to Heathrow; went from there to Amsterdam, Singapore and Melbourne;  we were travelling 48 hours non stop from when  we left Shannon to being boxed in Melbourne.

“It really just shows you” said Mark, “that Rekindling has some constitution to take all that in and only drop 5 kilos in weight.”

Dropping just 5 kilos was a real bonus as it meant that we could go straight back into normal work with Rekindling; while if he lost say 20 kilos, which would not be unusual,  you might have to wait at least two weeks before starting back to work.

“The entire experience was unreal;  living with horses for a couple of weeks and then to get that reward (Melbourne Cup victory) is just unbelievable.

“You must remember Joseph would not have seen the horses for seven weeks; I'd be sending him back all the relevant information on how things were going; we would discuss how we would step up his work, etc; a lot of responsibility but to get the reward at the end of it was so worthwhile and rewarding.”

An experience of a lifetime, really, said Mark, the way they do racing over there; they say it's the race that stops a nation but really the place absolutely shuts down; for the week beforehand you turn on the telly and everything is simply Melbourne Cup, Melbourne Cup, wall to wall coverage, you only realise how big it is when you are there.

Would you prefer the flat to the jumping side of racing?

No real preference came the quick reply before adding “maybe a slight preference for the jumpers but I love working with the young horses; this time of year with all the  2-year-olds being stepped up you get to see some of them come to the top; while others might fall away; you can spot cracks with some while others just progress and progress.”

So what is the set-up at Owning Hill like; a lot of horses in training no doubt?

“About 170-180 horses; 40 riders down there; good riders; the making of a place is to have good riders; and they are hard to get. Riders can make or break a horse at home; you get horses that are half cracked or mad and you get the right (or wrong) lad on him, it can turn the horse one way or the other; good riders are vital to any yard.”

Mark explains his day-to-day work and what it entails at such a busy establishment.

“I live in Cahir, in Tipperary; have a couple of my own (horses) there and look after them in the evening; but I'd be in Joseph's for 6.30am; the riders would be in and tacked up for 7; first lot in the ring 7.30 and  maybe five lots.

“I don't ride out now; my biggest role would be when Joseph is away, I'd be looking after the lots (groups going out) but then I'd be chatting to him deciding what work each horse would do and then report back to him how each one went and so on. I love it down there. To be involved with  a yard that has really just after setting up and to be producing winners like we have you have to take a lot of pride from that. I don't actually go racing these days from a work perspective, their is a set team for that, the travelling head man and a couple of lads with him.”

Mark admits though, that he is looking forward to Punchestown, from a social point of view, wouldn't miss Punchestown for anything.

With so many horses in the yard, the logistics of placing, entering, transport, it must be a huge operation?

Joseph's Racing Secretary does entries and declarations, “Joseph would make the entries out from the calendar month; give it to the Racing Secretary; he would then talk to the owner before declaring and the racing secretary would chat with the Head Man in the Yard to arrange who goes with what; really to ensure you are not pulling maybe three lads out of the same corner of the yard and so on; so the racing secretary and head man decide who exactly goes racing; it is all very streamlined but a lot of work goes into it and a lot of planning but it's the same in all the yards.”

Mark played football with Raheens but admitted “I struggled at minor level, the physicality was a problem, remember I was claiming 7lbs off 8st 5lb so trying to play minor football, it just didn't mix but then when I joined Joseph's Yard I didn't play at all.”

However he says that the kick he got last year watching Raheens win the intermediate football championship was similar to the way he felt after Rekindling clinched the Melbourne Cup.

“That was some day in St Conleth's Park and back in Cooke's of Caragh later that evening, he says, adding “who will ever forget Seanie (Taaffe) coming up the village in the lorry with the players in the back hanging out all over the place; even if I had to curtail the celebrations as I was starting my two weeks quarantine the very next morning.”

So while Mark may not have blown the lights out in Tom Lawlor Park, at the tender age of 26 he is certainly making a name for himself in the racing world and while he admits that “some day I would love to train on my own” for now he  is thoroughly enjoying life on The Hill; gaining all the experience he can as he plots and plans, along with his boss Joseph O'Brien, for all the big races, whether they be on the Flat or National Hunt; let it be at his home tracks at Punchestown, Naas, the Curragh, throughout the country, across the pond, or indeed far away in Melbourne.

One gets the feeling we'll be hearing a lot more of Mark Power as the years unfold.

48 page Punchestown Supplement with this week's Leinster Leader, in the shops now