COUNTDOWN TO PUNCHESTOWN: It's the team that makes the difference 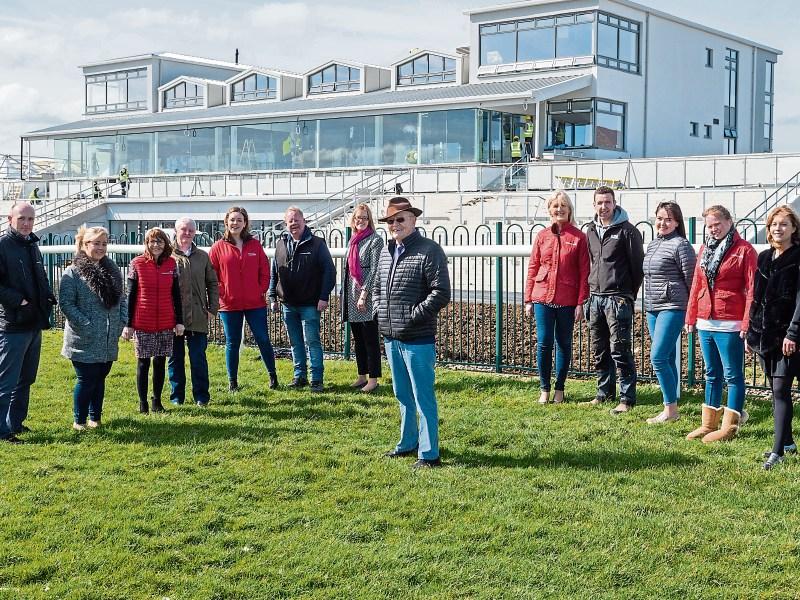 Dick O'Sullivan with his Punchestown team

There's a paper clipping pinned to the notice board in Dick O'Sullivan's office in Punchestown. It is an interview with fellow Kerryman, Mick O'Dwyer.

Included is a pic of the great football maestro with a heading which reads: Why should age enter into anything, you're either capable of running and organising a team, or your're not.

Nothing to do with age, but if there is anyone capable of organising and running a team it is Dick O'Sullivan and he is the very one to acknowledge 'The team' he put together in Punchestown when he first arrived, has certainly delivered and delivered big time.

Remember when the Tralee native first landed in Punchestown (for a six month stint) the home of  National Hunt Racing was in debt to the tune of some millions; was haemorrhaging another million every year and was, to put it bluntly, going down the tubes at a rate of knots.

Now some fifteen years later, as Dick informs us “we have turned it around; paid off our debt and are now in the straight of close to a €6 million capital programme, the highlight being the unveiling of the new Hunt Stand which will be officially opened on the first day of this year's Festival.

“It's a good news story and one we are very proud of  here” says Dick, adding “this year the racegoers will see the vast improvements in the old stand, both floors; the winners' room (if they are lucky enough to get there) and down below the arch, the new stand, named The Hunt Stand.

Shona Dreaper, Punchestown's affable PR and Communications Manager reminds us that “this would not have been possible without the support of the Board of Directors. “We would not have been able to do any of the improvements here without their support” and most importantly, adds Shone “they trust us.”  The Hunt, as Dick says, “have allowed us to manage and to do the improvements.”

It is still a couple  weeks before the Punchestown Festival of 2018 is due to kick into action and the final touches are being carried out as all involved in the week long event continue to upgrade; continue to look for new ideas and continue to ensure that patrons thoroughly enjoy their visit.

Attendances have continued to grow and grow over the last number of years as the improved facilities, the top class racing, the various other events such as the Bollinger Best Dressed, a winner each day this year with the overall winner selected on the Friday.

While getting the general public in in such big numbers is absolutely vital, the money you would make at the turnstiles alone could not have turned the project around insists Dick O'Sullivan.

“It is the corporate business that is the mainstay, adding that “we are the biggest corporate act in the country at present, 17,000 corporates over the five days racing; a massive figure and it is sold out;  the new Stand was sold out completely five months ago, with much of it selling out off the plans.”

But remember, insists Dick, to achieve that the food has to be top class, the service top notch; people must come out of the place happy, adding “we bit the dust a couple of years ago but we learned from it; we held our hands up and now instead of just one company looking after all the food end, both public and corporate, we now have three catering companies. John Coughlan Catering; Gourmet Goodies (Natalie Collins) and Fergal Nugent.”

The Hunt Stand, as Shona reminds us will be finished with only days to spare. “It is in fact a 12 month job being completed in 9 months; it will be a tight finish but we'll get there” adding “it's the way we do things here.”

Dick O'Sullivan while admitting all at the venue have been involved with this project he pays particular mention of the Elliott Group, the main contractors; the project manager and the architect, not forgetting Richie Galway “who keeps on eye on progress on a day-to-day basis while Shona is heavily involved in the fitting and finishing of the project.”

Is the trainers' title over asks Shona.

Looks very much like it, I reply, but sure we all thought that last year also says Shona, suggesting she feels Willie Mullins will again be giving it  another tremendous rattle this time around.

The prize money continues to grow at the Festival and this year for the very first time it will go over the €3 million mark.

But will the British boys and girls come this season, I wonder aloud, particularly after them taking such a bashing in Cheltenham just a few short weeks ago?

“Remember that last season despite Willie (Mullins) and Gordon (Elliott) throwing everything but the kitchen sink at the trainers's title, the visitors (with 52 horses) took home no less than €650,000; that was with six winners and 24 places.

“They love coming here” says Shona “the owners in particular love the place because they know they will be so well treated, they love the craic; love the atmosphere and they really add to the Festival big time year in, year out.”

Pre-season tickets have been growing over the past few seasons and this year they are flying again.

“We already have €300,000 in cash in the bank due to pre-sold tickets, if you told me that was possible a few years ago, I would have laughed” said Dick but “with the advent of social media we can now get to the people through digital and they are buying their tickets early, getting better deals; it is all becoming a major part of the operation.”

The Bollinger Best Dressed is another huge attraction, Bollinger are back on board this year, a new three year deal; with the overall winner receiving a fabulous trip to France.

Another aspect of the Punchestown Festival is how Family Day has grown and is now the biggest crowd puller of the week on the final day, day.

Saturday was initially an industry day as Dick O'Sullivan informed us “but now it is massive with AES on board it has turned from a mere 2,000 to well in excess of 20,000; a really popular day to end the festival.”

The spin off to the local economy has been well flagged over the years with in excess of 25,000 overseas visitors again expected local

hotels, B&Bs will all benefit and with the Bank of Ireland sponsored Paint The Town Red campaign for Naas now firmly established, no doubt the craic after racing will, once again, be mighty.

Punchestown prides itself that many locals from Naas and the surrounding areas use it as nearly a public park, with a walking track right around the course.

It is something that again Dick O'Sullivan is very happy to continue and while there was a suggestion recently that possibly a charge should be in place for the use of the facility, Dick knocked that on the head.

The Kerry native did admit that “some people think they own the place, but we are happy once they park properly and safely, keep dogs on leads,  they are all more than welcome here and hopefully will be for a long time to come.”

The weather, hardly surprising, has been causing problems and it was only last week when the fences were put out, something that is usually done weeks earlier and while even fertilizer to stimulate grass growth has had to be stalled, course boss, Sean Ryan, described by Shona Dreaper as “world class” and his team will no doubt have the course in tip top condition come the start of proceedings on  Tuesday April 24.

So all in all, with the upgraded facilities, the new Hunt Stand, record prize money; Bollinger Best Dressed competition each day; big Family Day on Saturday; top class horses from home and abroad; the trainers' title still up for grabs and, hopefully, the return to action of Ruby Walsh, it is really a week to look forward to once again.

49 page Punchestown Supplement in this week's Leinster Leader, in the shops now