Robert Catterson casts his eye over next year's prospects 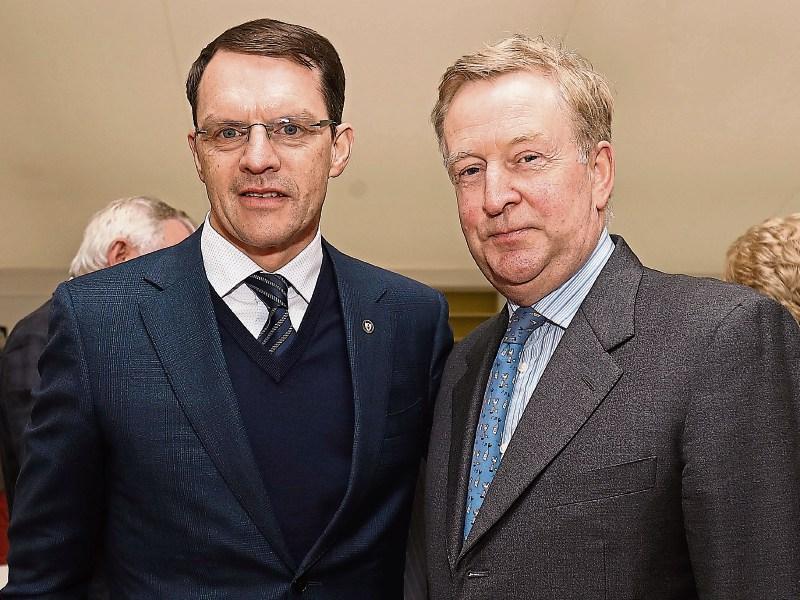 Aidan O'Brien, left, pictured with Michael Grassick at the launch of last year's Derby, has had a superb crop of juvenile fillies this year

Next May is a long time away. The current Flat season hasn’t even finished yet and there are still some key races to be run, especially on the two-year-old scene.

The likelihood is though that we’ve seen the juvenile stars of 2017 and like most onlookers, my mind has been made up as to which are the horses to follow for next year’s Classics.

Jim Bolger doesn’t need any introduction when it comes to the big race scene and with 11 Classics in total, he’s won his fair share of major races in Flat racing. However, he’s had plenty of top class two-year-olds without perhaps getting his just rewards the following season and it’s maybe rather surprising that just one English 2,000 Guineas has gone his way.

He’s had a quiet few years on the juvenile front but this year has been different and in Verbal Dexterity, he could have another superstar on his plate.

A seriously impressive winner on his career debut, he gave himself a shot as being crowned the champion two-year-old with a fine victory in the National Stakes at the Curragh last month.

We may still get to see him again in 2017 but whether we do or not, he’s most definitely the one horse which excites most of the current 2,000 Guineas contenders.

Aidan O’Brien has been blessed with a superb crop of juvenile fillies this year and there’s probably a good debate as to which is the best of them.

Happily has beaten the boys at the top level while September and Magical have proven themselves to be way above average too. I’m a huge September fan but when it comes to next year’s 1,000 Guineas, I firmly believe that Clemmie to Aidan’s main contender for that race.

On what she’s shown in her most recent runs, she’s a worthy favourite for that Classic too.

A full sister to Churchill, she took a little bit of time to get the hang of things but after a fine win in the Duchess Of Cambridge Stakes in July, she showed her true class by beating an excellent field in the Cheveley Park Stakes last month.

That day, she screamed to me as being good enough to soar to success again at Newmarket next May in the fillies Classic and if truth be told, she could be the Winter of 2018.

A few weeks ago, a horse caught my eye and it probably wasn’t one of the obvious ones either.

Aidan O’Brien dominated the Group 3 Juvenile Stakes at Leopardstown on Champions weekend and while Nelson was the deserved winner on the day, it was the performance of Kew Gardens which had me intrigued afterwards.

Having been held off the pace for much of the race, Seamie Heffernan’s mount suddenly took off when the winner had gone beyond reach and he gave every sign of a horse still learning.

Following that, he ran moderately at Naas but his victory in last Saturday’s Listed Zetland Stakes was extremely impressive.

Two factors benefitted him on Saturday too in that he experienced the fastest ground he’s yet to race on, which he clearly liked, and the step up to 1m2f was right up his street.

That might be the last we see of him this season and he won’t go into the winter as one of the Ballydoyle talking horses. However, he’s very much a serious Epsom Derby contender in my opinion and given the improvement he’s been showing, come next June, he could be the real deal.

Many will know my admiration for Aidan O’Brien’s brilliant filly and following her sizzling debut win at Leopardstown, she’s been at the top of my two-year-old filly list.

Her victory over the boys in the Chesham Stakes at Royal Ascot was pulsating and while she hasn’t won in her three subsequent runs, I’m not worried one little bit.

The vibes were that she was in bad need of the run on her comeback effort at the Curragh in August and she probably still wasn’t razor sharp when third in the Moyglare Stakes. Heading into last Friday’s Middle Park Stakes, I expected the daughter of Deep Impact to be at her best and while she didn’t win, she was undoubtedly the moral winner passing the line.

For those who didn’t see the race, everything which could have gone wrong for Seamie Heffernan did go wrong and after having her path blocked more than once, she still managed to fly home only to be touched off by a diminishing nose. I don’t get overly excited by many two-year-olds but September is one which will help me get over the Cheltenham blues next March. Why? She’ll win the 2018 Epsom Oaks, that’s why.