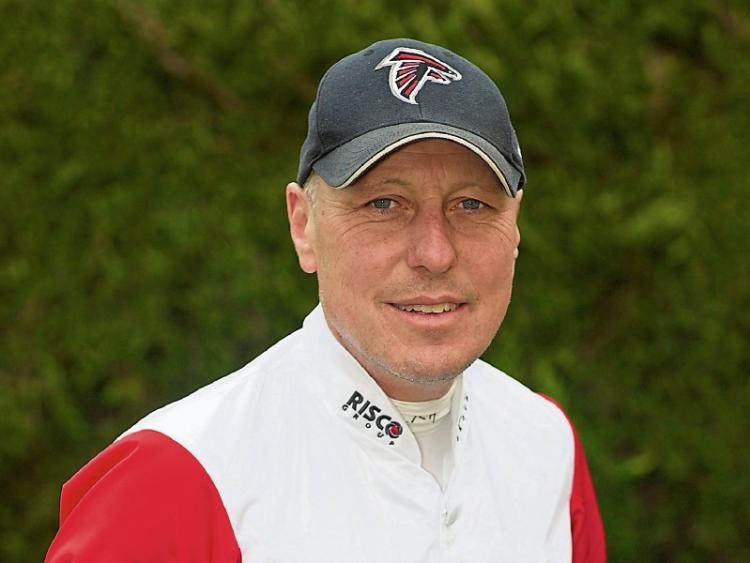 Packing in golf to take up riding National Hunt horses is the roughly equivalent to shifting your musical preferences from classical music to the punk rock genre.

But that’s what Naas man Richie Walsh decided to do a few years ago.

Richie (46), whose family were among the very first to move into the Ashgrove estate off Dublin Road,  had been lifelong golfer and a member of Naas golf club. He had been a member of the club for about thirty years, since he was a juvenile.

The former St Corban’s primary school and Naas CBS student, always had an interest in horseracing but, like many others, it was confined to betting.

Then, in 2009, he took himself out to Alan O’Neill’s Abbeyfield Farm Country Pursuits and Equestrian Centre in Clane for riding lessons. It was around the time that he packed in working for himself and began work as a regional sales manager for the Risco Group.

Risco are manufacturers of cloud-based physical security system, using the kind of technology that allows you to secure your home or business from a mobile phone in another country right down to being able to boil a kettle or switch on the lights via your phone.

And Richie looks after sales and technical support across Ireland

This led him to the yard of well known racehorse trainer Arthur Moore at Derreens, Caragh, where he struck up a relationship with the trainer and his son JD Moore and began riding the horses in the yard, which he still does every Saturday.

“I always had an interest in horses and when the recession kicked in I had loads of time on my hands. I would never claim to be good jockey but I had the interest and my weight is always about 11 to 11 stone 5 pounds. I will always be grateful for the way the  Moores treated me. They were encouraging and helpful and pointed me in the right direction, down to which horses I should ride.”

On Saturday April 29 Richie will take part in the charity race, which is traditionally the last event on the five day card. It’s been taking place for 28 years. Organised by Kilcullen’s James Nolan, it’s raised some €150,000 for the Punchestown Kidney Research Fund.

Richie hopes to raise €10,000 much of which will come from a golf scramble competition for 28 teams at Naas Golf Club but also from hamper raffles in some local pubs.

“I’m grateful to anybody who has helped me in any way and all of the money will to Temple Street Children’s Hospital for a renal ward. I’ve also had support from Risco who paid for the costs of staging the scramble and whose colours I’ll wear in the race.” His riding silks were made by Kathleen Kennedy of Lumville, Curragh, whose son jockey Will Kennedy rides for trainer Donald McCain in the UK.

What is the appeal of horse riding ?

“It gives you a different perspective; you just fall in love with it. It’s a complete switch off and when you're on a horse all you think of is you and the horse.”

It will be  Richie’s fourth charity race when he lines up in the 25 horse field. All of the horses will carry 12 stone with an additional pounds added for every race won, prior to the race.

The race will be run under National Hunt rules and all of the participants have been assessed by the Racing Academy and Centre of Education in Kildare town.

He’ll be hoping to emulate Evening Herald horseracing writer Niall Cronin, another Naas man who rode the  winner of the race in 2010.

“Niall was a good jockey; you could see that and I'd say he could have had a career as a jockey if he wanted to.”

It’s not the most gambled on event of the festival and Richie’s not getting carried away.

“It’s a difficult race to predict; I'm hoping to be closer to the front than the back though.”

We wish him all the best.