Jessica hoping to build on her proud Punchestown memories 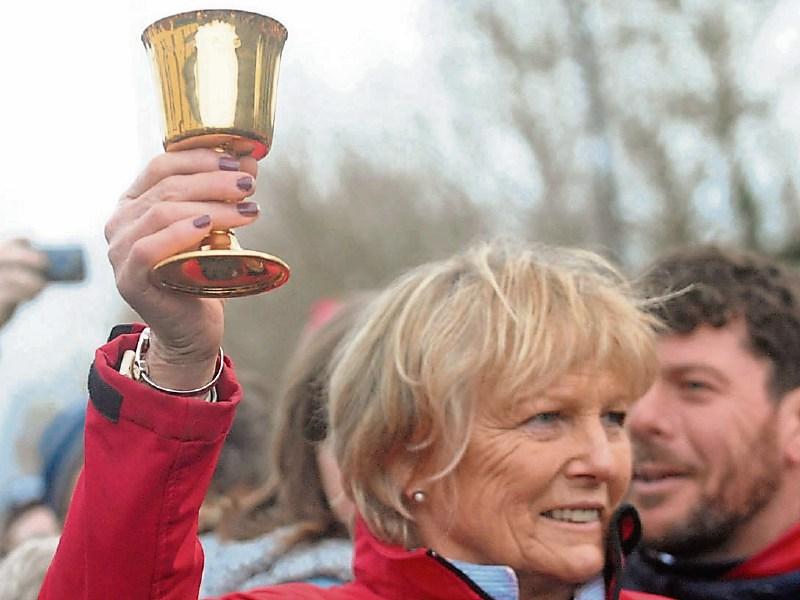 WHEN it comes to Punchestown festival memories, Jessica Harrington is at the top of the tree.

It’s been over 25 years since she saddled her first runner at her local festival but it’s a long time before that which gives the Moone trainer her first memories of the five day meeting.

“I used to go to the festival as a kid. We used to hang out at the old doubles and we’re talking 60 years ago when the Punchestown festival was only held over a couple of days,” reminisces Punchestown’s most favourite lady.

“We would have a picnic on the top of the banks down at the very back of the racetrack, where the quarry is now, and we’d look at the races from there. I would go there with my friends and back then, the majority, if not all of the races, were bank races. That’s how long ago it is.”

It’s over 20 years since Dance Beat gave Harrington her first big success as a trainer at the festival but she has no trouble in remembering her first Punchestown runner, which came a couple of years before that 1996 triumph.

“I remember Brockley Court running in a hurdle (the 1993 festival) and it was Dance Beat which gave me my first big Punchestown win when she won the Champion Novice Hurdle. She was a great mare and won a good few races for me at that time,” says Harrington of the talented mare, who won her bumper at the 1995 Punchestown festival.

Oh So Grumpy was another of the Harrington stars around that time to taste Punchestown success and by this time, she had very much established herself as one of the best trainers in the land. All she was missing now was a household name and in Moscow Flyer, he would become a Punchestown regular from the 2000 festival onwards.

“Moscow Flyer won at four different festivals and he started off by winning the Champion Novice Hurdle in 2000. After that, he won a Punchestown Champion Hurdle, the Swordlestown Cup Novice Chase and a Champion Chase as well. He really loved Punchestown.” says Jessica of her most famous inmate.

However, it’s two of his later Punchestown festival appearances which stand out in Harrington’s mind more than most. One for the right reasons and the other for the wrong reasons.

“The year when Rathgar Beau beat him in the Champion Chase shouldn’t have happened because there was no mirror on the far side of the winning line like there is now. We don’t actually know if he was really beaten that day but what happened that day happened and we move on. Kate then rode him to win the Charity Race at the 2007 festival and that was a great day. It was a lovely way for ‘Moscow’ to finish off his career.”

Of the four main races at the Punchestown festival, Harrington has won three of those and it’s Jetson’s victory in the 2014 Ladbrokes World Series Hurdle which stands out as good as any. Just weeks before that triumph, Harrington’s husband John passed away.

“That was a very special day and a very emotional day for all of us. Jezki also won that same race a couple of years later and Macs Joy and Jezki both won a Punchestown Champion Hurdle too.”

Despite enjoying numerous big race success at past Punchestown festivals, it’s quite likely that next week, Harrington will bring her best team to the end of season extravaganza, headed by Cheltenham Gold Cup winner Sizing John. She reports her new stable star in fine fettle too.

“Sizing John is in great form. To have any winner at Cheltenham is very special but to win the Cheltenham Gold Cup was wonderful. If he could win a Punchestown Gold Cup would be very special and while it’s a home game, Willie Mullins and Gordon Elliott will be throwing everything at this race as they’re going hammer and thong for the trainer’s title. It’s nice to see that Coneygree is coming over and that’s great for the race.”

The Irish National Hunt Festival has been a lucky place for the Harrington team but regardless of that fact, she is full of praise for the five day meeting, which signals the end of the Irish jumping season.

“The festival itself is getting bigger and better every year and the team there do a fantastic job. It’s always very well supported by the English trainers and hopefully, there will be a good few English runners again this year. It was a bit of a one-sided scenario at Cheltenham but I’m sure they will travel. Punchestown is a place very close to my heart and I just love it.”

The Punchestown festival wouldn’t be the same without the presence of Jessica Harrington and her team of horses. If recent results are anything to go by, she’ll be here for a long time to come.