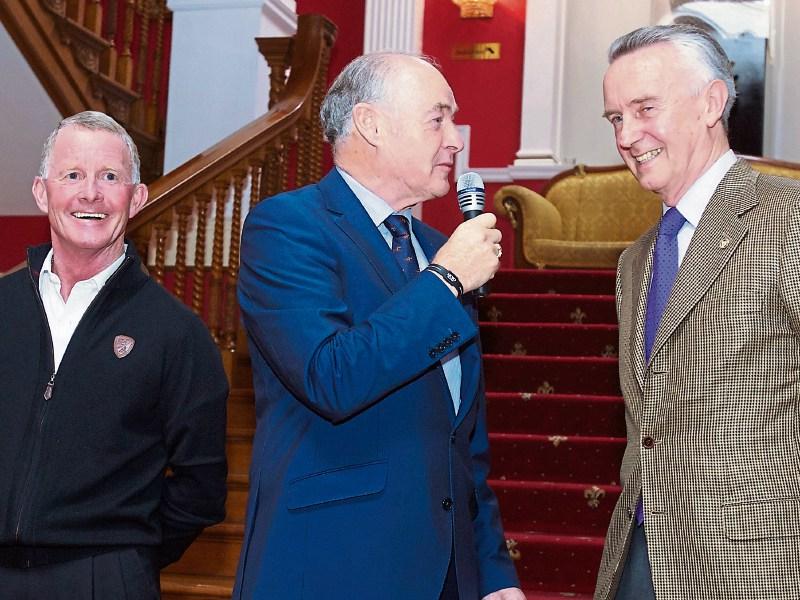 MC Dessie Scahill, chats to Jim Bolger and Mick Kinane at the launch of the Flat Season today

The 2017 Flat season was officially launched today (Tuesday March 21) at Palmerstown House, Manor House, Naas, ahead of the opening meeting this Sunday (March 26) which will be held at Naas.

With the redevelopment ongoing at the Curragh, it falls to Naas to host the opening meeting of the year. Tom Ryan, Manager of Naas Racecourse was on hand to welcome invited guests, which included many personalities from the world of racing, trainers, jockeys, sponsors and business people.

Tom Ryan told those present that all at Naas are looking forward immensely to Sunday's meeting, the first of eleven meetings at the popular venue with will include an excellent and exciting mix of flat and national hunt racing throughout the season; beginning this weekend with the opening Flat meeting of the Year, while the closing Flat meeting of 2017 will also be held at the Woodlands Park venue.

MC for today’s launch was the legendary commentator Dessie Scahill, while top trainer Jim Bolger and former top jockey Mick Kinane were on hand to talk of their experiences in the world of flat racing.