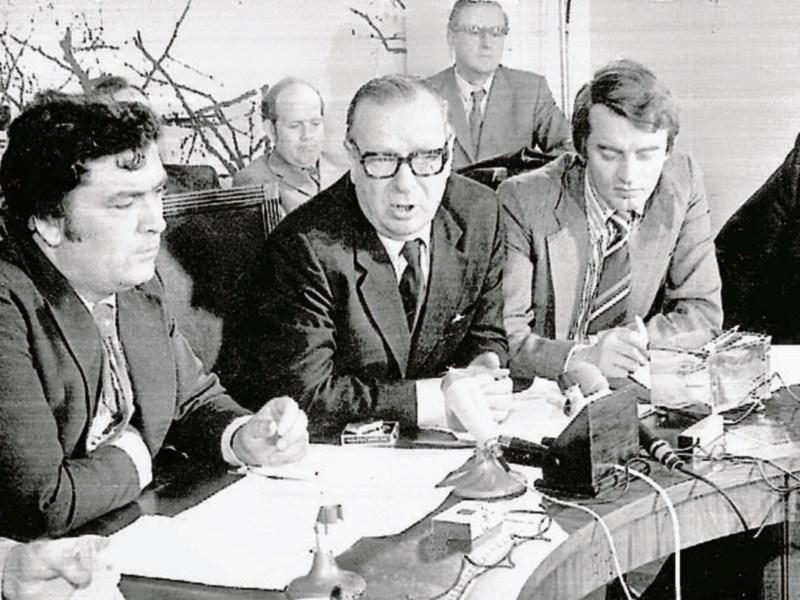 John Hume, Gerry Fitt and Austin Currie in the 70s

The politician, who lived near Allenwood, passed away on November 9.

“It has been a great privilege to know Austin Currie, to work with him and to enjoy his friendship,” said Mr Dukes.

“I admired his courage as co-founder of the SDLP and his unswerving commitment to the cause of civil rights. At a time of great difficulty in Northern Ireland politics, Fine Gael was happy to give him the opportunity to continue his involvement in electoral politics and he successfully stood as a candidate for election to Dáil Éireann in Dublin West in the 1989 General Election. He held a seat there until 2002.

“It took great courage on his part to stand as a candidate in the 1990 Presidential election, but he did so with a heart and a half. In that election, he was a man before his time.

“After his retirement from political life, he and Anita moved to Derrymullen, where they quickly became respected and happy members of the local community.

“Austin was a rock of sense, a shrewd observer of human nature, a great defender and promoter of human and civil rights.

“He never lost his commitment to the people he had so ably served in Northern Ireland, in Dáil Éireann and as a Minister of State. He was always a warm and humorous friend.

“My heart goes out to Anita, Emer and all the Currie family. Ar dheis Dé go raibh sé.”

The former MP, TD, Minister and Minister of State is survived by his wife Anita, children Estelle, Caitríona, Dualta, Austin Óg and Emer and their spouses Sean, Siobhan, Hiroko and Malcolm, 13 grandchildren and extended family.