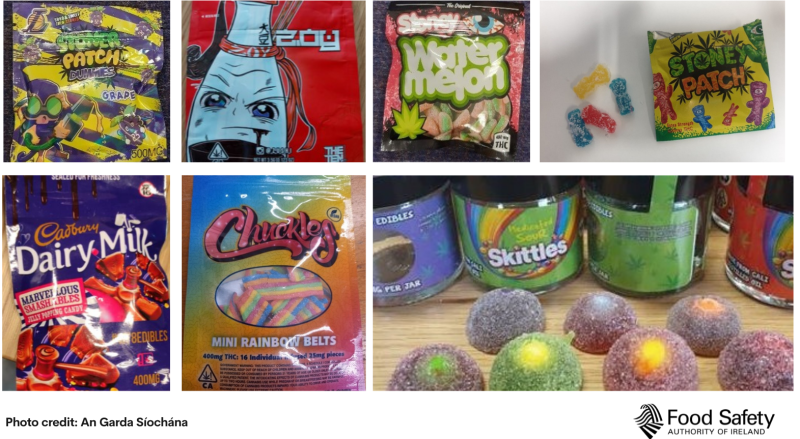 The Food Safety Authority of Ireland (FSAI) is today urging the public, especially parents and guardians, to be extremely vigilant to the dangers of inadvertent consumption, particularly by children, of cannabis edibles.

Products such as jelly sweets containing the psychoactive cannabis component known as tetrahydrocannabinol (THC) have been growing availability in Ireland.

THC is a controlled substance in Ireland with a zero tolerance under the Misuse of Drugs Act, 1977.

Furthermore, in food, THC is considered a contaminant, with no permitted threshold in EU or Irish food law.

The FSAI issues this warning in advance of the Halloween festivities next week where small children, teenagers and adults will be celebrating and where there is an increased risk of people, particularly children, unwittingly consuming these types of products that are intentionally packaged to resemble popular brands of jellies in order to avoid detection.

Dr Pamela Byrne, Chief Executive of the FSAI, says the accidental consumption of edible cannabis products by children is extremely worrying: "We know adults and/or teenagers are ordering these illegal products from online or other illegal sources for their own personal use."

"However, they often have no understanding of the real health dangers of these products and are careless or reckless in putting young children’s health at risk by allowing them access to these products."

Dr Byrne continued: "The prevalence of these edible products containing THC in communities and schools around the country is a growing cause for concern and parents and guardians should be extra vigilant during festivities such as Halloween where parties will be underway, and the risk of accidental consumption of these products is considerably higher.

"We are working closely with other Government agencies including the Health Service Executive’s Environmental Health Service and the Public Analyst’s Laboratory in Dublin, An Garda Síochana, the Revenue’s Customs Service, Forensic Science Ireland, the State Laboratory and the Food Standards Agency in Northern Ireland to detect and stop the import of these illegal food products into Ireland."

She added: "We welcome any information from the public in the national effort to curb the availability of these illegal products and to protect our children and young people."

"We can be contacted through our online complaint form at www.fsai.ie/makeitbetter."

It has been reported that six children under the age of ten have been hospitalised so far in 2021, for having accidentally consumed THC-containing products which looked like normal jelly sweets.

There have also been reports of teenagers falling seriously ill, and in some cases requiring hospitalisation after having seizures and becoming unconscious from overdosing on these cannabis edibles.

The FSAI specifically points to the high volume of THC in these illicit edible sweets can pose serious health risks, particularly to teenagers and children of all ages, whose neurological, physical and physiological development could be impacted negatively.

Cannabis toxicity can cause cognitive and motor impairment and in the case of children this can be extreme, lasting up to 24 to 36 hours after consumption.

Depending on the concentration, eating one of these jellies can mean ingesting a level of THC that is five to 10 times higher than that inhaled when smoking cannabis.

As such, there are fears that children who ingest several of these jellies may accidentally overdose on them.

Unlike the almost immediate effects from smoking cannabis, there is at least a thirty-minute time delay from consumption of cannabis edibles until the initial effects are felt.