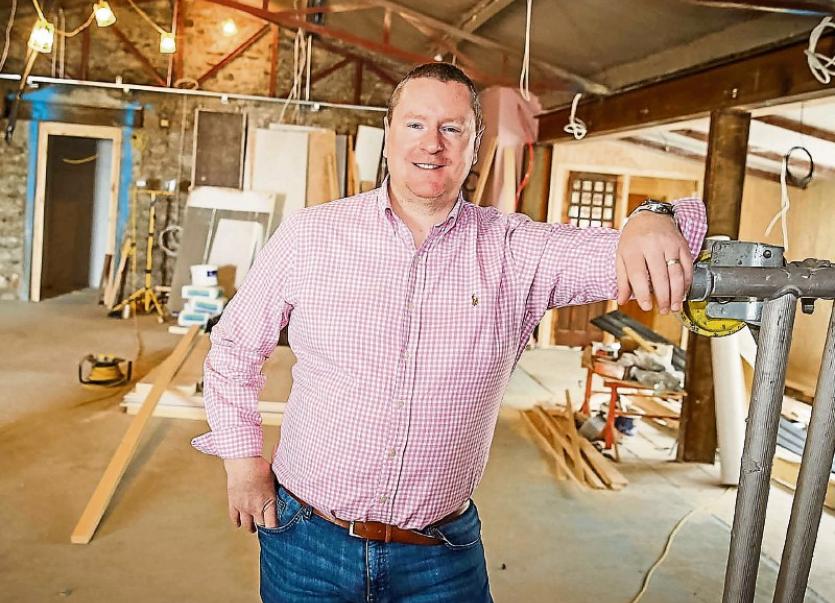 A €500,000 renovation and extension project has been underway for the last few months at the well-known pub and eatery, 33 South Main in Naas. The famous Naas landmark premises was known as ‘The Ivy’ for decades until seasoned hospitality artisan Andy Hogan acquired the property in June 2017 and completely gutted, renovated and rebranded the establishment as ‘33 South Main’.

The business has been closed due to the coronavirus restrictions but has been open since May 8 for takeaway food and drinks.

Mr Hogan has added a 2,500 sq. ft event and live music space using an existing building which had been used for storage at the rear of the existing establishment with works almost at completion stage.

The new offering, which will be known as ‘The Stores Bar & Venue’ will hold 200 people and will be multifunctional. The investment in the project is over €500,000 and once complete will create 15 new full and part-time roles.

This is in addition to the existing 28 people who are currently employed by Mr Hogan, making 33 South Main one of the largest employers in the hospitality sector in Naas.

The Stores Bar & Venue has been designed so that it can be used to accommodate additional diners and patrons, or it can be used as a standalone private function space. It has its own separate bathrooms and bar and can be accessed via a dedicated entrance off the private car park to the rear. The new event space also has its own permanent stage which can host larger bands for live music sessions and televised sport will be shown on several large screens and projectors.

Mr Hogan commissioned P & R Design and they settled on a stripped back vibe where the materials would be left in their raw natural state, including the metal girders and beams which form the skeleton of the old building.

As part of the overall project an area at the side of the existing Conservatory has also been renovated adding 40 seats to the pub.