Death of 106 year old May Morris, oldest woman in Kildare 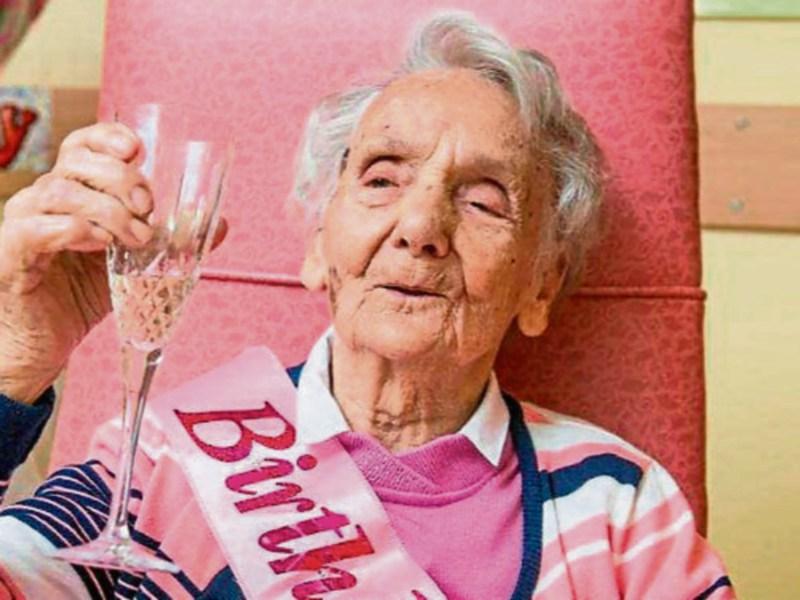 May Morris when she was celebrating 104th birthday

She was of a very happy disposition and she never worried a whole lot about anything, is how Kildare’s oldest citizen, May Morris, who passed away this week, has been described.

She was the oldest person living in county Kildare at the time of her death in the care  of Hillview Nursing Home, Carlow.

A spokesperson for Aras an Uachtaran said that  according to its records there were three older living people in the State.

There are currently eleven people living in county Kildare who are over 100 years old.

Her funeral took place at the Church of the Assumption, Castledermot, on Wednesday, January 8.

In an interview in Turtle Bunbury’s Vanishing Ireland book, conducted when she was a 100, May said: “The children today are like how Kings and Queens used to be years ago. They are brought to school and picked up after. They wear lovely clothes and they go to lovely schools. I don’t know anything about the teachers now but they used to murder us.”

She and her younger brother, Paddy, with whom she lived up to relatively recently, attended a mixed school in Castledermot.

May was the second of eleven children born to James and Rosanna Byrne, a farming couple from Graney Cross on the road between Castledermot and Baltinglass, County Wicklow.

In October 1922, the then nine-year-old May heard the shots of a Republican ambush on a Free State convoy at nearby Graney Bridge which left three soldiers dead.

In early 1942, she and 20 other local women were recruited  from the Castledermot area to work in a munitions factory near Birmingham. She went to work at Guest, Keen & Nettleford’s factory in Smethwick.

Four of her siblings went to live in Australia, where most of her extended family now live.

One, Myles Byrne, co-founded the Irish Club in Sydney.

A relative living in Kildare, Margaret Balfe, told us that May was cared for very well in Hillview Nursing Home. “She was always very active. I think happiness was the secret of her age. She was of a very happy disposition. She never worried a whole lot about anything.”

“She liked plain food and had faith in God. She would make the best of a situation,” said Margaret.

Margaret said May loved going to Australia for holidays.

She went for her 90th birthday and went swimming when there.

May moved back to Ireland in 1980 following his death of Joe.

May a cousin of Walter Balfe, the grandfather of Kildare County Councillor, Padraig McEvoy.

In May 2012, Cllr McEvoy met in May at a wide family gathering. He attended her funeral this week. “She was a happy enough character,” he said of the meeting

After the death of her brother, Paddy,  in 2013, May moved to the Hillview Nursing Home in Carlow, having lived at home up to the age of 101.

She was laid to rest in Coltstown Cemetery.