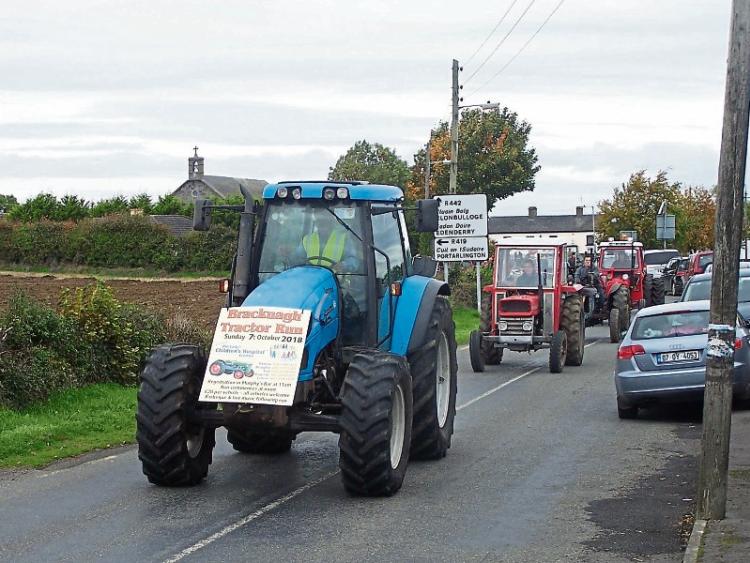 The seventh annual Bracknagh Tractor Run is taking place this Sunday October 6 in County Offaly to raise vital funds for some of Ireland’s sickest children.

This Sunday, 200 vehicles are expected to take part in the tractor run. Registration opens at 11am and costs €20. There will be soup and sandwiches available in a trailer while people are registering, and face painting and wellie throwing games to keep the kids entertained.

The convoy will leave from Bracknagh at 12pm and drive a 20km route finishing back in Bracknagh for the afternoon festivities. Everyone is encouraged to take part and you don’t need to bring a tractor – people bring their lorries, motorbikes and vintage cars.

“We want everyone to join in and have fun,” said Eugene O’Neill, Bracknagh Tractor Run committee member. “It’s a real family day so you don’t need to go on the tractor run to enjoy the event. After the tractor run we have a BBQ, a raffle and live music.”

Eugene will be auctioning off the shirt he wore on The Late Late Show in September when he was awarded AXA Farm Hero 2019. Eugene was nominated for the competition because of his inspiring work fundraising for Crumlin Hospital. It was announced by Ryan Tubridy on The Late Late Show that Eugene had won.

“It was an honour to win the AXA Farm Hero contest,” said Eugene O’Neill. “Hopefully we’ll have a lot of people attending the Bracknagh Tractor Run this weekend and will raise a lot of funds to continue helping some of Ireland’s sickest children.”

Learn more about the work of CMRF Crumlin https://cmrf.org/