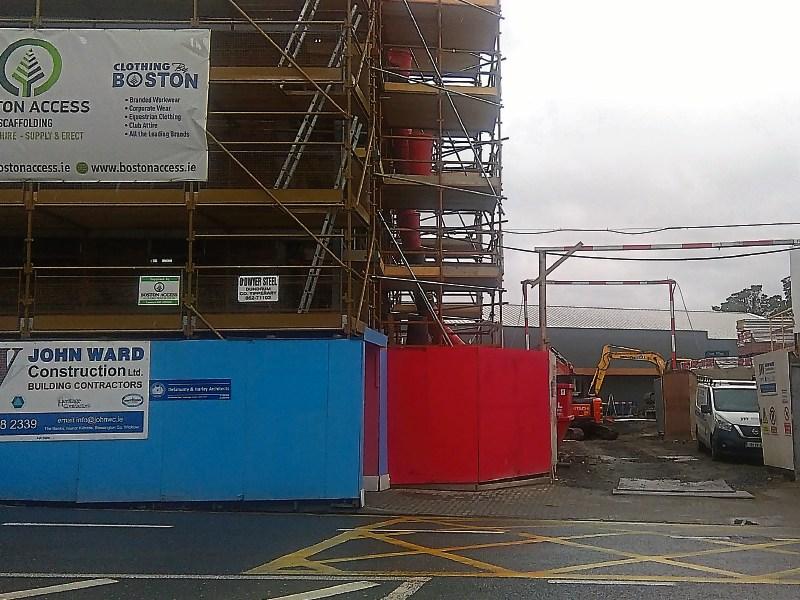 Work is continuing at the Naas site

The new Dunnes Stores supermarket in Naas is to open shortly, most likely before the end of August, at the former Superquinn site.

The Leader understands that the redevelopment will be completed in early August, probably by the end of the first week of that month - and the premises will then be stocked.

Dunnes Stores, which also has supermarkets in Newbridge and Blessington, has not commented on when the store will open and did not respond to a request for a comment by the Leader.

Although Dunnes sell clothing in many of their units, the Naas store will be a food only outlet.

A year ago it was thought that the 30,000 sq ft supermarket would open in February 2019 but it will now take place in August amid some concerns about the traffic volumes the store is likely to attract.

At the same time the former Grandstand pub building to the front on North Main Street is being restored to be used by an independent retailer, with two apartments overhead. The redbrick Grandstand building is a protected structure.

Meanwhile the derelict Naas Shopping Centre, completed a decade ago, remains on the books of the National Asset Management Agency and has not yet been put up for sale.

Dunnes was to have been the anchor tenant for that development, taking up substantial space on two floors. The NSC has the potential to provide 800 car park spaces.

The Superquinn store closed in February 2011 with the loss of 110 jobs and the site, which occupies 1.3 acres and had 60 parking spaces, has been vacant since.

The Dunnes outlet is larger than the Superquinn store partly because it has incorporated some outside buildings into the new structure, but it still retains 58 car park spaces.

The narrow roadway connecting the premises with the Sallins Road side of North Main Street and which was previously used as an exit only route from Superquinn, will be reopened for vehicles leaving the Dunnes shop.