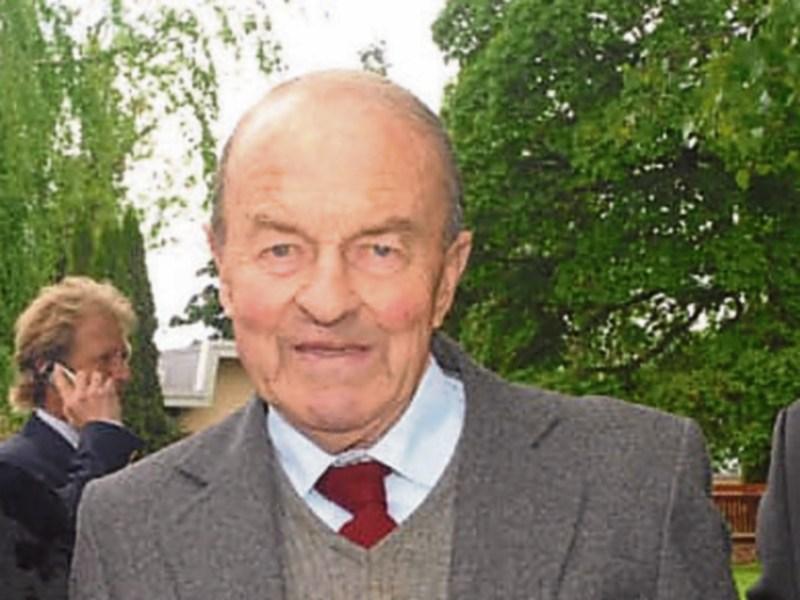 The late T.P. Burns at the Irish National Stud during the Queen's visit

Its been almost two weeks since renowned Irish jockey TP Burns passed away, and horse racing enthusiasts have continued to bask in his past successes and remember his glory days.

The Curragh resident, who left this world at the impressive age of 94, lived at Landfall Paddocks. He died on May 14 after a short illness under the wonderful care of the staff at St. Vincent's Hospital Athy.

Horse Racing Ireland said he would be remembered as one of the most successful and versatile jockeys of the last century, and an integral part of Vincent O'Brien's team through much of the trainer's career.

TP partnered Ballymoss to win the Irish Derby and the English St Leger in 1957 and was runner up on the same horse in that year's Epsom Derby.

Born in 1924, Burns won half a dozen Irish Classics in all, the last of which was the Kevin Prendergast-trained  Pidget in the 1972 Irish St Leger. He was also a top rider over jumps and was successful nine times at the Cheltenham festival, all over hurdles for Vincent O'Brien.

He was runner-up in the 1955 Champion Hurdle on Stroller and rode the legendary Arkle to success in a Flat race at Navan in 1963.  When flat and jumps winners were combined, Burns was leading rider in Ireland on three occasions in 1954, 1955 and 1957.

After riding his first winner at 14, Burns rode for almost four decades before retiring from the saddle and working as an assistant for O'Brien at Ballydoyle. He later filled a similar role for Dermot Weld. He came out of retirement to win on the Weld-trained Old Man River at Punchestown in July of 1989.

Beloved husband of the late Christine, he will be sadly missed by his loving sons James and Tom, his sister Stella, grandchildren Tommy, Elodie and Anna, daughter-in-law Helen and James' partner Lia.

His funeral mass took place on Wednesday, May 16 at St. Brigid's Church, The Curragh with burial afterwards in Tynaclash Cemetery, Kiltegan, Co. Wicklow.

The Curragh Racecourse said in a Facebook post after his death. “RIP to the legendary TP Burns who passed away yesterday, we will miss him at the Curragh. Condolences to all his family.”

RIP to the legendary TP Burns who passed away yesterday, we will miss him at the Curragh. Condolences to all his family. pic.twitter.com/Kuei3HvvCN