Passengers irate over extreme overcrowding on Newbridge train this morning 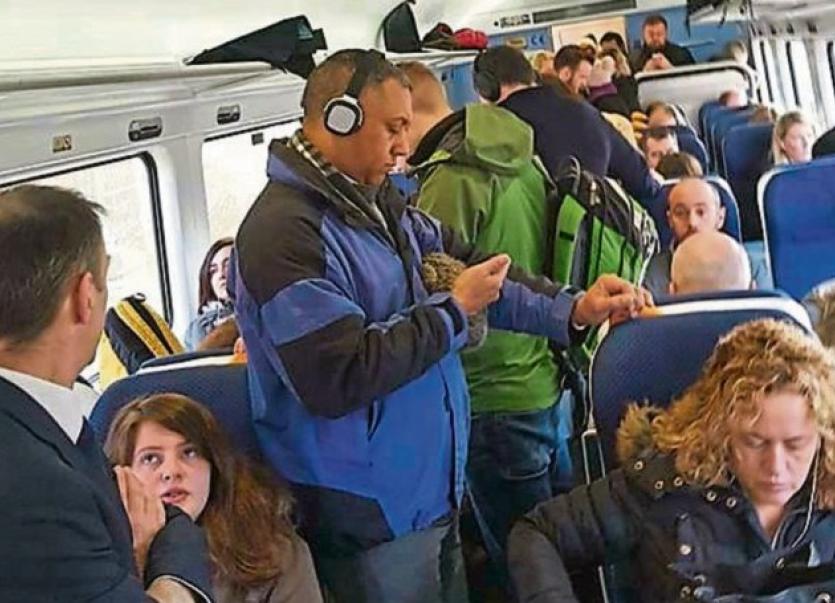 The 7.19am train from Newbridge to Grand Canal Dock

A passenger, who was aboard the 7.19am Iarnrod Eireann train from Newbridge to Grand Canal Dock this morning, said the train was so overcrowded people were in danger of fainting.

Such was the crowd, Jill Scanlon said there were handfuls of people unable to even get on the train from Adamstown onwards.

"By the time we came to Clondalkin, there was no room in any part of the train for anyone to board. Ironic that you’re (Iarnrod Eireann) taking 15% of our salaries for train tickets and can’t even get half of us to our workplaces," she said.

Ms Scanlon said it was vital more carriages were added to cater for all passengers. She said commuters are paying as much as €280 a month to use the service and people were actually passing out from overcrowding. She said there was no room for movement on the train this morning, and there was no replacement service for those who couldn't physically fit on the train.

“Absolutely disgraceful, Irish Rail know they are the only rail service in Ireland and are using extortionate prices and low quality services because they know they can. What happened to putting the people first and doing the decent thing? It’s a joke."

When contacted by the Leinster Leader, Iarnrod Eireann said; “unfortunately this train was reduced in size to three carriages this morning as a result of vandalism of a train overnight.  It will be restored tomorrow to its normal four-carriage size.

“The nature of peak commuting is that there will be heavy loading, both in Ireland and internationally. Our trains are designed to safely accommodate heavy loading, albeit that the train was unavoidably reduced in size today. We use all of our available fleet at peak time, and it should be remembered that we diverted any remaining available capacity to establish the Phoenix Park Tunnel services.”

The spokesperson said ultimately, the company needs new trains to expand capacity, and has not been funded for this in recent years.

“We are set to refurbish 28 carriages which have been out of service for a number of years, which will increase our fleet size from early 2020.  Beyond that, the National Development Plan includes funding for 300 new carriages over the coming decade, to cater for growth and electrification. It is anticipated that we will go to tender for an initial order of approximately 100 carriages this year, but the lead times involved mean it will be 2022-23 when these would enter service,” he said.

“In the meantime, any expansion of service will primarily be at off-peak, as Connolly is heavily congested at present and with the forthcoming expansion of the DART service.”