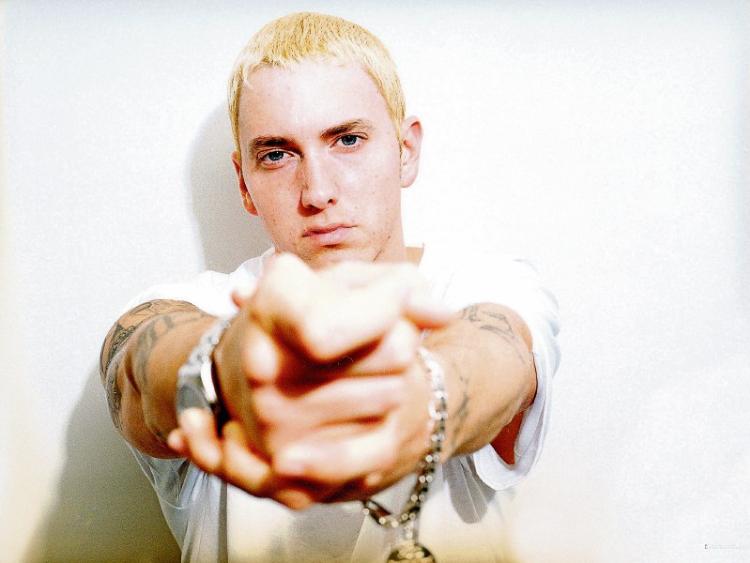 Tom Jones, Culture Club and Shane Filan are on the bill for this summer's Punchestown Music Festival... but in 2003, an expletive-driven young fella from Detroit was the headliner at the Kildare track. Robert Mulhern remembers how the day - and night - went...

You know its a big gig when you can get off a mini-bus, grab an emergency slash and not have to break into a sprint to catch the mini-bus again.

It was like that when Eminem played in Punchestown in the summer of 2003.

There was a queue of toilet-stops that ran all the way from the racecourse to the Red Cow roundabout.

Eminem had a movie out around then called 8 Mile and some people had to walk that distance from Kill to the concert at the track.

The van was packed with people and warm cans of Amstel.

But there was an obstruction. The council closed the Craddockstown Road and stuck a security man with a yellow jacket behind a metal barrier.

We knew the Osbournes lived out on the Craddockstown Road.

With the Blessington Road looking like an evacuation scene from a war film, we figured we’d beat the chaos with the excuse we were collecting Robbie.

Of course we didn’t know him.

“This lad must be f**kin popular,” said the security man, pulling the gate clear.

“Because yis are about the hundredth person gone to collect him!”

Tom Jones is set to play Punchestown in the summer. James Brown played there before him at Oxegen. And David Gray headlined the festival before that again.

READ MORE: The triumphs and disasters of Naas fashion in the 80s

But this gig sticks in the memory because it was a Thursday, and going from work in Naas to watch Eminemn in Punchestown — well, it felt bizarre.

The mood music that morning was a line of upset callers chewing the ear off Clem Ryan on KFM.

Sure wasn’t Punchestown the scene of some great equine feats? A track where Arkle once performed, not some expletive-driven young fella from Detroit.

You could spot all the heads arriving down from the North too.

The sky was gun barrel grey and it wasn’t particularly warm for June, but the Nordies were everywhere, decked out in GAA socks, white shorts and nursing warm cans of beer.

Then there was the environmental impact.

Joe Kavanagh was doing a bit of farming out the back of Eadestown and I remember hearing serious complaints about the welfare of his cattle, grazing within earshot of the afternoon soundcheck.

The feedback from the microphones was deafening.

And you could hear the boom of the base drum, loud and clear... all the way to Ballysax!

When Eminem flew in by chopper everyone looked up. What he must have been thinking, looking out the window coming over Beggar’s End, God only knows.

But he was clearly out of kilter when he took to the stage.

“HELL-O DUBLIN,” he shouted, stalking the stage with his shirt off, and pointing the mic at us like it was a gun.

In fairness, how was Eminem to know?

That one-liner could have been a highlight, until Eminem strung together all the one liners of his hit song Without Me.

The rap was relentless, darkness fell and the strobe lighting on stage sent blinding flashes of bright back towards Naas.

Standing there, where years before we used to go to ride the fairground, it was difficult to feel like this was anything but surreal.

Even the people who weren’t at the track felt it.

My folks had planned a quiet barbecue in the back garden in Lakelands, but whatever it was about the
atmosphere and the still of the air that night, they heard every boom of the base drum, every swear word, every line of Lose Yourself

“In the music, the moment, You own it, you got to never let it go!’

"You only get one shot, do not miss your chance to blow’

“This opportunity comes once in a lifetime…”

It’s difficult to remember too much more after that — even for this column which depends on remembering to fill space.

All I know is that the Heineken cost a fiver a pop and it was better to buy two at a time.

Or four if you could find a helper.