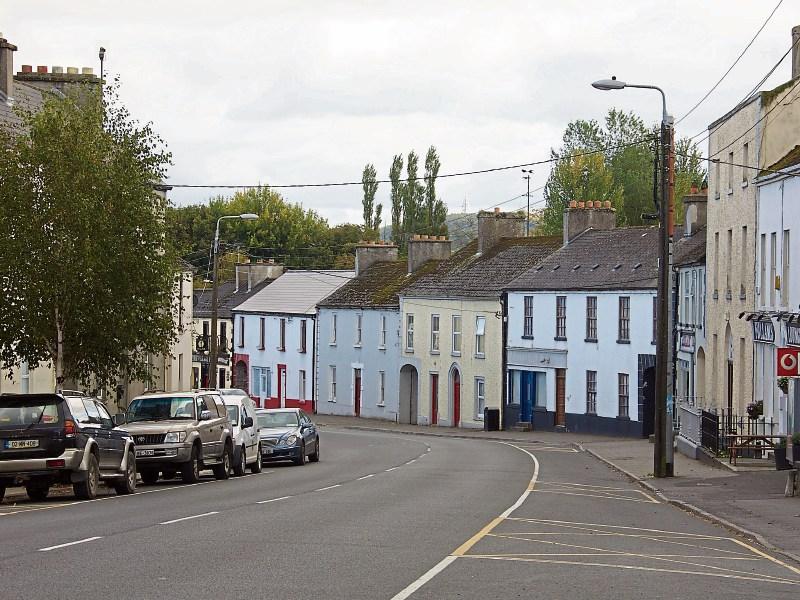 There were no restaurants, save for Annie Martin’s on Main Street (but that was for Bord na Mona workers). And no take aways either until John Joe Conway opened the first where the filling station is now,  opposite Conlan’s car dealership. The nearest chip and burger joint was in Kildare town. Today there are more fast  food outlets/restaurants than there were grocery stores back then.

A historical monument of epic proportions. There are many raths and moats around Ireland but the one “at the top of the town” really stands out in terms of scale and you’d fit the equivalent of the one in Naas into a corner of this Early Middle Ages beast. It was the hideout of choice for many students mitching from the nearby school. If it was good enough for Iomghain himself to while away a few hours; it was good enough for us as a place to go to dodge a class. “There was a party of boys seen on the Rath today - led by Mr Gavin,” Vice Principal Sean Reidy announced at the start of one inquiry into unexplained absences. Mr Gavin was never among the ringleaders though, who shall remain nameless. Like the rest of us, he just went along for the craic.

It wasn’t the Odeon and there was no buttered popcorn or carpet - and it’s now a Centra. But the late Harry McCormack had a cinema (Harry Mac’s), an independent one, at New Street where Westerns, films about World War 2 and Bruce Lee epics were the staples. The normal exit routine was for someone to take a running kick at the emergency exit door bar.

The GAA was big in Rathangan largely due to the fact that the glory days of the 1920s were that little bit nearer. It’s a proud boast for some that Rathangan had four players on the last Kildare team to win an All-Ireland. There were three - Anthony Lynch, John “Sheriff” Kennedy and John Fitzsimons on the county schools team which got to an All-Ireland final only to lose to, predictably, Kerry.

It’s still big there but there was a rawness to the old dressing rooms opposite what was Gavin’s house. There was no heating, no showers, not always enough time  to wash the jerseys and the smell of wintergreen was ever present.

The son of a Co. Limerick man and both are known as Jack Connell. O’Connell won a senior hurling championship in the mid-seventies with St. Brigid’s and more later on with Coill Dubh. He played senior football at midfield for Kildare and had a long innings as a Kildare hurler (as did Anthony Lynch). He was a provincial boxing champion. Oh and he built a successful underage hurling team around an impossibly gifted full back.Today you’d call  him a role model but for some growing up in that era he was, simply, a legend.

Rathangan is blessed with two waterways - the River Slate and the Grand Canal - and both enhance the appearance of the town. Back then the river was home to a large trout population and was periodically poached.  Both the river (less so) and canal were used as swimming pools at a time when the nearest proper pool within the county was in Naas.

You undressed, dried and dressed beside a tree and hoped that you wouldn’t come out in hives as a result of the weedkiller deployed by CIE along the canal banks.

Many an autumn evening is spent indoors. In Rathangan back then robbing orchards was the Xbox console. Many houses, notably a few along Leinster Street, had apple trees back then and at that time of the year the trees would be fleeced of their bounty. It was never about the fruit though; always about the chase. Therefore only the crankiest and easiest riled proprietors could expect a nocturnal visit from the Orchard Thieves of the day.

The girls were pretty..still are, still are, still are. Especially the coterie which would wind up in the Leaving Certificate class of ‘81. Never before, or since, have so many good looking women been born around the same time. And well they knew it, taking themselves off, for the most part, to find partners outside Rathangan.

There was a skirmish during the 1798 rebellion where Leinster Street meets the road to Bracknagh. And a local landlord named Spencer (after whom Spencer Bridge is named and who was reputedly an antecedent of the late Princess Diana) was piked by rebels in his home (now Spencer Court). Legend has it he placed a bloodied hand on the wall as he fell down the stairs and the hand-shaped stain returned no matter whether the wall was repainted, repapered or rebuilt. And we believed Loman Behan when he told us that Fionn MacCumhail flung a boulder from the Hill of Allen on to his father’s land.

It didn’t bother us at the time. But the school, known simply as “the Tech” was a many splendoured thing. It was located in three buildings around the town - Ard Ratha, the garda station and where the convent is now. The first Leaving Certificate class was in 1976. Uniforms didn’t exist at the start and  then only for the girls. When the boys were asked to start wearing one it was case, initially, of “anything brown will do.”

“That’s what Madigan told me” is a common expression used to back up a mental mathematic calculation. A native of County Clare, Sean Madigan was the principal of Rathangan BNS in that era. His best stories were extra curricular; like how the Israelis managed to defeat the numerically superior and better equipped armies of the Arab nations in the Six Day War. If you don’t know, you mustn’t have been listening.

This old leather processing plant doesn’t even merit a mention on Google. There are houses bearing the Tannery description there now. And, appropriately enough, a playground. Its abandoned state, floors covered in leather cuttings, the aroma of industrial decay, giant wooden barrels and water-filled concrete vats out the back proved an irresistible draw.

It wouldn’t have passed a healthy and safety audit but, as an unofficial playground, it was the only show in town.