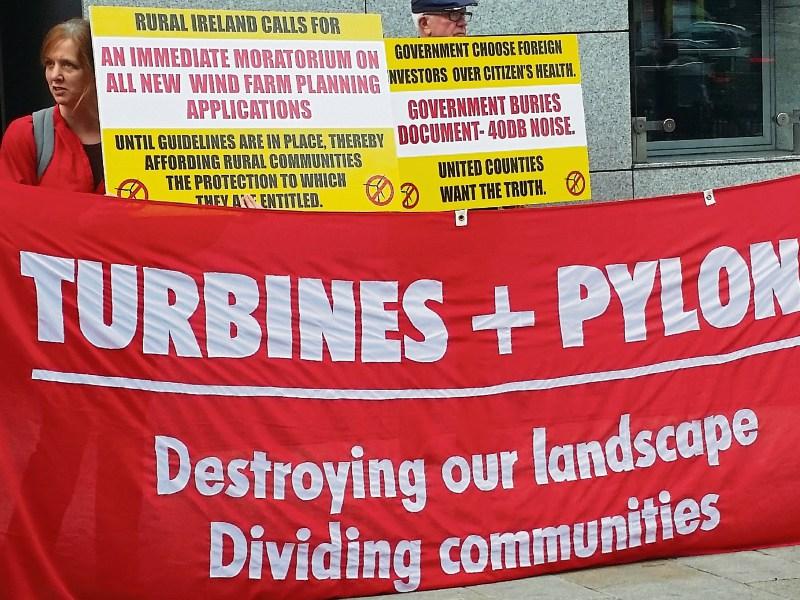 The Kildare Environmental Awareness Group (KEAG) has campaigned against Element Power’s plans for a wind farm in Kildare. It has also criticised the government for delays in publishing the wind energy guidelines, which would determine future turbine set back distances from homes.

The group, along with many other local communities campaigning against wind farms, are also keeping a close eye on a High Court case taken by Cork families against a wind farm company.

It is listed for 10 days before the courts, from Tuesday, April 25.

In the High Court order issued on December 6, Mr Justice Gilligan adjourned proceedings to deal with damages and costs.

The order noted “the court records that liability has been admitted by the Defendants in the action”.

The case was taken by four members of the Shivnen family against Enercon Wind Farm Services Ireland Ltd. The case also includes six other separate actions.

“The outcome of the April court case could be a watershed for existing and planned wind farms as well as for investor confidence in, and government plans for the future of on-shore wind in Ireland,” said Wind Aware Ireland.

Further cases could follow pending the outcome of the case.

Wind Aware Ireland said; “The Department of Communications, Climate Action and Environment has known since 2015 that the minimum setback distance of a turbine from a house, required to protect human health from noise, is far greater than that currently recommended.

“This information, which emerged from an Access to Environmental Information enquiry, was kept under departmental wraps and publication of updated planning guidelines promised by Minister Naughten within six months of this government’s formation have been repeatedly postponed.”

Wind Aware Ireland said this information is now in the public domain.

“The State, by allowing continued development of wind farms is risking costly legal actions against it. In addition, local councils and individual wind farm companies will face similar cases. Rural communities have had enough," it said.

Meanwhile, Element Power is due to challenge An Bord Pleanála’s decision to refuse permission for the 47 turbine Maighne Wind Farm in the commercial court. The wind farm, if approved, would have stretched up the west side of Kildare up towards the north of the county.